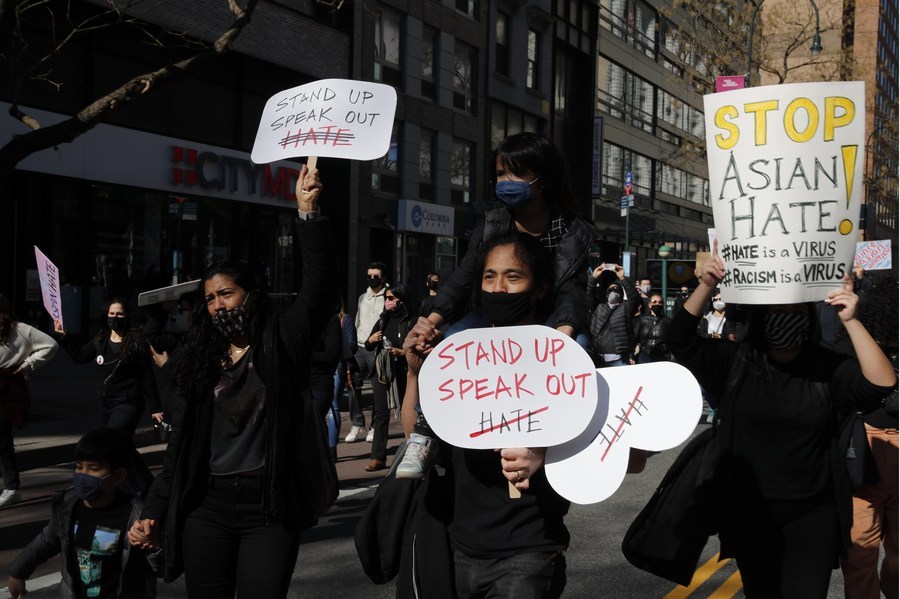 People take part in a protest against Asian hate in New York, the United States, on March 21, 2021. (Photo: Winston Zhou/Xinhua)

"Asians are not silent anymore!" cried protesters from more than 60 cities across the United States, who have been rallying against racism and violence on Asian Americans ever since the mass shootings in mid-March in Atlanta where eight people, including six Asians, were killed.

The unfolding campaign is the latest reminder of "les miserables" under America's long-time masquerade of a human rights defender, and of Washington's failure to tackle the systematic racial, social and economic inequality in the country.

Hate crimes targeting Asian Americans have seen a surge ever since the outbreak of the COVID-19 pandemic. According to US nonpartisan research and policy organization the Center for the Study of Hate and Extremism, anti-Asian hate crimes rocketed by nearly 150 percent in 2020 in 16 largest cities in the United States.

Yet Asian American communities are not the only ones having suffered such traumatic injuries -- never forget African American George Floyd's desperate plea of "I can't breathe" before death last year, and the following massive Black Lives Matter protests, which are still ongoing.

For a long time, the US government and media outlets have turned a blind eye to America's own terrible human rights record. Instead, they have thrown themselves into making groundless accusations against the human rights situation in other countries.

The same US media outlets have raised not a single question about America's dire COVID-19 situation during President Joe Biden's first press conference on Thursday, but are busy pointing a finger at other countries' human rights issues citing their self-proclaimed investigative reports.

The same US government has turned its back on the country's ethnic minorities who have been disproportionately affected by the pandemic due to great and persistent racial differences in wealth and access to health services, but is busy retooling its alliances to smear China over Xinjiang.

In fact, Washington is merely playing the human rights card to make its own geopolitical and economic gains. For example, the ulterior motive of using such phrases as "forced labor," "concentration camps" and "genocide" to describe Xinjiang is to stoke divisions and instability in China, and to contain the country's development.

Fortunately, more clear-eyed people worldwide have come to realize Washington's hypocrisy and double standards on human rights. During the 46th regular session of the United Nations Human Rights Council, the United States and its allies tried in vain to boast their "human rights superiority," and were urged by a long list of countries to address their own issues including racism, discrimination, police violence and hate crimes targeted at ethnic minorities.

Indeed, the international community has every reason to doubt the credibility of the high politics Washington is playing, not least at a time when solidarity and cooperation are badly needed in battling such tough global challenges as the pandemic, economic recession and climate change.

The COVID-19 pandemic has taught the whole world a lesson crystal clear: national boundaries matter very little in this age when different countries and peoples are inevitably and inextricably connected to one another, and any attempt to split the world into different camps is doomed to failure.

Only by conducting constructive dialogue and cooperation in the field of human rights and discarding politicization and double standards could the international human rights cause be soundly developed. The United States needs to learn to respect the path chosen by others for human rights development, take concrete actions to address such domestic issues as racism, racial discrimination and police violence to effectively protect the rights of racial and ethnic minorities, and refrain from spreading political lies and launching groundless attacks against other countries.