OPINIONS Lesson of the Anti-Fascist War

Lesson of the Anti-Fascist War 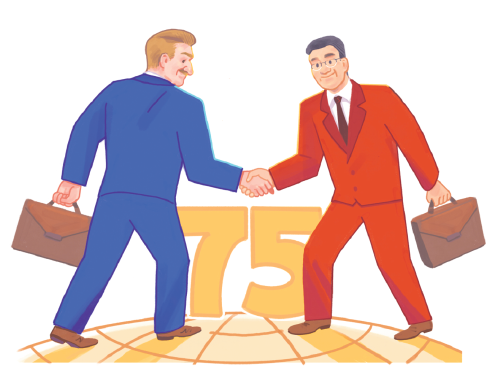 This year marks the 75th anniversary of the allied countries' victory in the World Anti-Fascist War. China and Russia, the main battlefields of World War II in Asia and Europe, made huge sacrifices and indelible contributions to the victory. During a phone call with Russian President Vladimir Putin, President Xi Jinping said peoples of the two countries fought alongside each other and forged a great friendship in the war, which served as an exhaustible impetus for bilateral relationships and everlasting friendship. Looking back at this unforgettable history has special value for deepening the Sino-Russian relationship.

World War II was the deadliest conflict in human history. It came as a direct result of the economic crisis of 1929, and profoundly changed the world's economic, political and security landscapes.

After World War II, emerging countries rose rapidly, and despite the abnormal global relationships formed by the two rival superpowers, technological progress brought countries around the world closer, and developing countries got opportunities to participate in the global economy.

The world has thus undergone changes with new trends, including multilateralism. This trend continued into the post-Cold War era, and international organizations based on multilateralism became the mainstay in promoting global and regional stability. Following this trend, Chinese leaders proposed building new international relationships based on the principles of win-win cooperation, inclusive development and opening-up, and Russian leaders also advocated creating a multi-polar world.

After their rivalry in the Cold War era, China and Russia realized normalization of their bilateral relationship, solved border issues through negotiations and disarmament and launched the "Shanghai Five" mechanism that eventually evolved into the Shanghai Cooperation Organization. The two countries are jointly fighting separatism, extremism and terrorism alongside Kazakhstan, Kyrgyzstan and Tajikistan. At a time when the global landscape is changing dramatically and untraditional threats are looming larger, China and Russia are dedicated to promoting regional stability and safeguarding regional security, thus creating a safe environment for countries in the region to develop together.

The outbreak of World War II stemmed from the failure of the world to build an international security system. Big powers aligned to contain each other and engaged in a relentless arms race. The international community had made great endeavors to build a new security framework after the victory of the allied forces in World War II. History has proved that a few big powers carving out spheres of influence to determine the fate of the entire world does not solve international security issues. The establishment of the United Nations set a stage for countries to safeguard their own rights. The restoration of China's seat in the UN and its close cooperation with other developing countries have enhanced the organization's prestige and its role in keeping global peace.

People have learned to cherish peace from the devastating war. China advocated the South-South cooperation during Cold War and proposed the Five Principles of Peaceful Coexistence. In the 21st century, the world is witnessing changes unprecedented in a century and facing opportunities and challenges at the same time. Human history now stands at a critical juncture. Following the trend of the times, Chinese leaders have put forward the idea of building a community with a shared future for mankind, contributing Chinese wisdom to global governance, which has been incorporated into a UN Security Council resolution.

In the 1930s, it was the lack of a well-established multilateral mechanism that led to the unjust international order in the post-World War I years. The Paris Peace Conference is referred to as a meeting to divide the spoils of war in which the victors, who cared only about their own interests, carved up the rights and interests of the defeated countries and re-divided their spheres of influence, an act of power prevailing over justice. The Versailles-Washington System, the new international order formed under the leadership of the victorious powers of World War I, and the League of Nations established in 1920, met a cold shoulder from the United States which adhered to isolationism. It was not a real multilateral mechanism, and as a result failed to curb the rise of fascism in the wake of the Great Depression, leading to the situation of Europe spiraling out of control.

Today, the world faces another big challenge－the COVID-19 pandemic, which has put a halt to economic activities and caused a great loss of life worldwide. It is a special "war" caused by a public health crisis which will have a huge impact on globalization and regionalization.

But the world is still plagued by power politics and the Cold War mindset, which escalated after the 2008 global financial crisis. Unilateralism and protectionism are not proper ways to safeguard a country's sovereignty, but a blatant disregard of international laws and rules, a rebirth of hegemonism in new forms and even bullying of the vulnerable ones.

China and Russia both advocate and practice multilateralism, and cooperate under multilateral frameworks such as the Shanghai Cooperation Organization, G20 and BRICS. After the pandemic subsides, on the one hand, multilateralism will gain recognition from more countries and boost economic recovery worldwide; on the other hand, unilateralism and xenophobia will rise in a few countries. China and Russia ought to make more efforts to maintain the global strategic balance and defend multilateralism to create equal opportunities of development for emerging economies and developing countries. This is an important lesson we can learn from the victory in the Anti-Fascist War.

The author is director of the Institute of Russian, East European and Central Asian Studies at the Chinese Academy of Social Sciences. The author contributed this article to China Watch, a think tank powered by China Daily. The views do not necessarily reflect those of China Daily.