Let the power of solidarity spread

Countries around the world are now extending their warm appreciation to China for the assistance the latter has offered in midst of the COVID-19 epidemic. 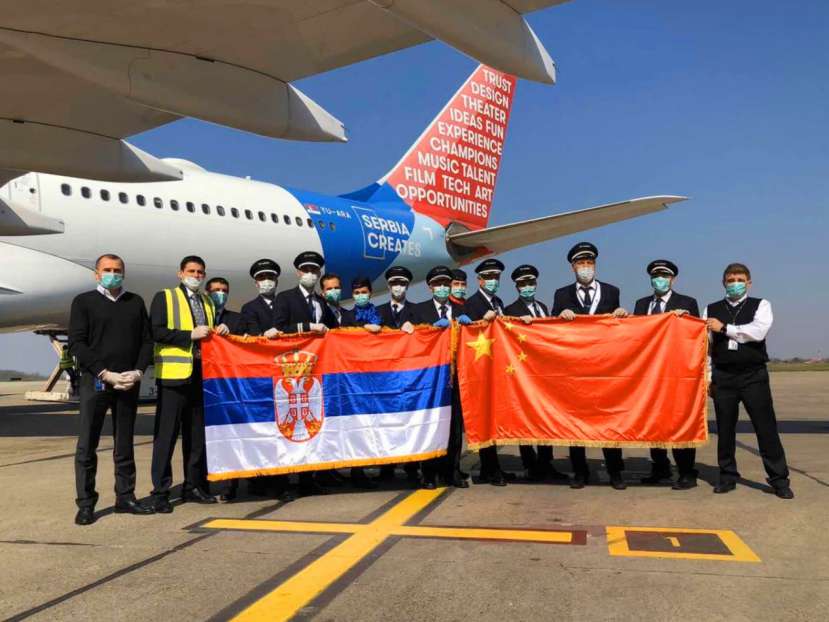 The cabin crew of the charter flight of Air Serbia pose for a picture with a Serbian and Chinese national flags on March 20, before they depart for Beijing to pick the Chinese experts and medical supplies donated by the Chinese government. (Photo courtesy of the official SNS account of the Chinese Embassy in Serbia)

The Chinese government has announced assistance to 82 countries and regions, the World Health Organization and the African Union, including testing reagents, masks and protective suits. Batches of these supplies have been delivered to the recipients.

Besides, China has so far shared epidemic prevention and treatment guidelines with more than 100 countries and regions, and over 10 international and regional organizations around the world.

Such solidarity is forged as the world needs to cope with the challenge together. When China is consolidating its epidemic control efforts at home, it is also rendering help to other countries as much as possible, which contributes to the global public health security and showcases the sense of responsibility of a major country.

A team of Chinese medical staff with experience in fighting COVID-19 arrived in the Serbian capital of Belgrade on March 22, local time, to help with the Balkan state's battle against the virus.

They were received by Serbian President Aleksandar Vucic at the Belgrade Airport. The President gave an elbow bump to each of the team member and kissed the Chinese national flag to express his gratitude.

A Chinese and a Serbian national flag were also knotted together at one end, as a manifestation of mutual help between the two countries.

Many buildings were illuminated in the color of the Chinese national flag in Belgrade on the same evening as a sign of Serbia's gratitude to its ironclad friend China.

Such practice revealed the deep friendship between the two peoples sharing weal and woe, reflected the brilliance of humanity and deeply touched the two peoples at this difficult time.

Vucic announced a state of emergency in the country to fight the spread of the novel coronavirus on March 15. Under the measures announced by the president, Serbia banned entrance to all foreigners. However, "the only ones allowed will be Chinese doctors," the president expressed, saying that it was the only country that would help. 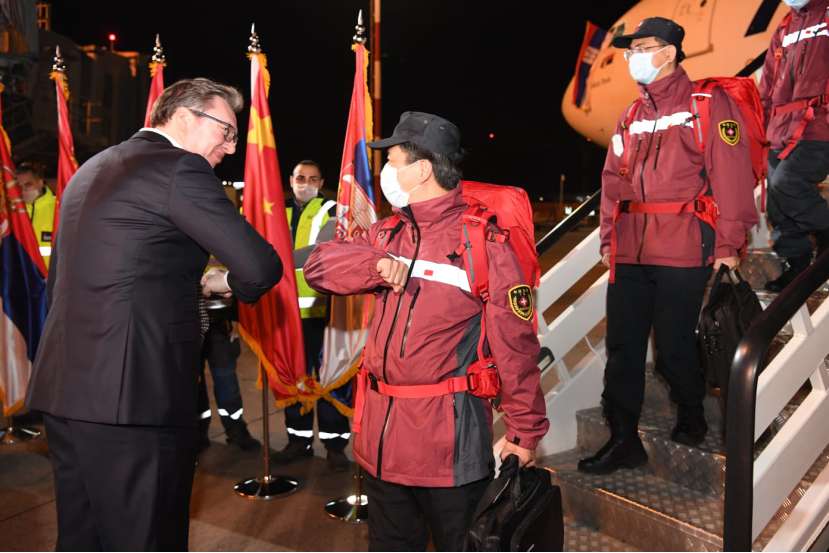 A team of Chinese medical staff with experience in fighting COVID-19 arrived in the Serbian capital of Belgrade on March 21, local time, together with medical supplies donated by the Chinese government. They were greeted with an elbow bump from Serbian President Aleksandar Vucic (L) at the Belgrade Airport. (Photo courtesy of the official SNS account of the Serbian president)

On the same evening, the first batch of testing kits donated by China arrived in Belgrade. Two days later, the Chinese side expressed the willingness to send medical experts to the country.

By delivering on its promise, China has spread the power of solidarity to the world.

A friend in need is a friend indeed. Stories of mutual help keep on emerging in the joint fight against the disease, bringing warmth to this tough spring.

European Commission President Ursula von der Leyen said that the European Union is “grateful for support from China”, in a speech videotaped in English, French and German.

Czech President Milos Zeman said, "I would therefore like to thank the People's Republic of China, which was the only country that has helped us deliver these supplies."

Similar stories are way many, and that’s why “Thank you, China” has gone viral on social networks where people speak different languages but convey the same appreciation.

A growing number of countries have seen the value of friendship in China’s pursuit for greater love and common interests, and realized that solidarity and cooperation are the sharpest weapon to prevail over this rampant disease that concerns all.

“China has set a good example for the international community by lending a helping hand to other epidemic-hit countries in a timely manner,” said Russian President Vladimir Putin.

An official of Bosnia and Herzegovina noted that a friend in need is a friend indeed, adding that China’s generous donation reflected the sincere friendship between the two countries.

Philippine Secretary of Foreign Affairs Teodoro Lopez Locsin lauded China for being a global model in the fight against the coronavirus. He called for countries around the world to "start working together to help each other", instead of blaming each other.

Mankind is a community with a shared future, and combating the epidemic through cooperation is a joint responsibility for all players in the international arena. The world should carry on concerted efforts and fight to the last until the epidemic is terminated in every single country around the globe.

In the joint fight against the epidemic, people have come to realize the value of friendship, built up the confidence to go through the difficult times, as well as seen the hope for victory over the disease.