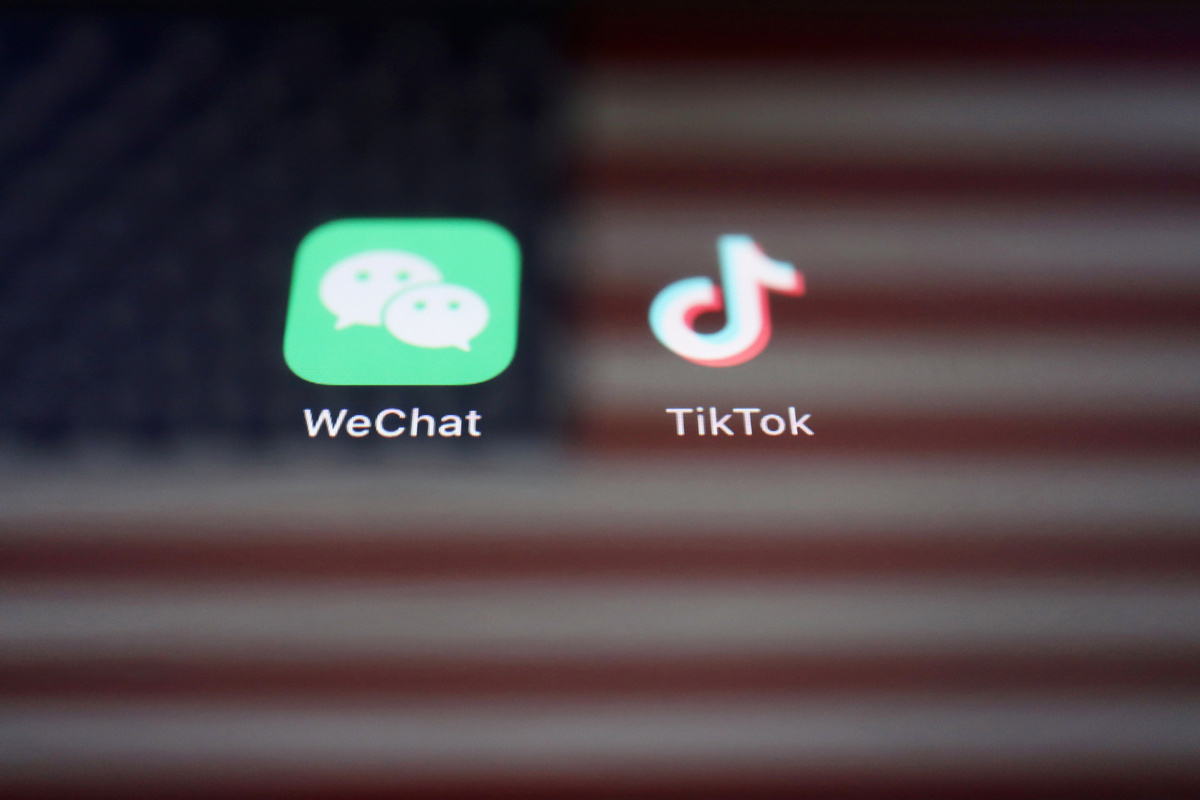 A reflection of the US flag is seen on the signs of the WeChat and TikTok apps in this illustration picture taken September 19, 2020. [Photo/Agencies]

Politicians from the United States do not hesitate to tell lies in their attempt to smear China whenever possible. They think that if they tell a lie a thousand times it will be believed to be true.

The most recent example is what US Under Secretary of State for Economic Growth, Energy, and the Environment Keith Krach told Cypriot media about China.

He said that China's national security law requires any Chinese company, State-owned or otherwise or any Chinese citizen to turn over any information, proprietary technology, intellectual property or data upon request to the Communist Party of China or the Chinese military or suffer the consequences, and therefore Chinese businesses are "untrusted" and "risky" vendors for 5G technologies.

He could not provide any evidence to sell his allegation that China's telecom companies such as Huawei pose a threat to the national security of any country that uses its equipment. And that is because what he said are lies. Supposed threats to national security have become a refrain of US politicians in their badmouthing of Chinese companies.

The truth is the entire world knows what the US has done as far as internet espionage is concerned, from surveillance of its own citizens to even the leaders of its own allies.

That a judge in San Francisco on Friday rejected a request from the US Justice Department to reverse a decision that allowed Apple Inc and Alphabet Inc's Google to continue to offer Wechat for download in their US app stores points to the way "national security" is being used to crack down on Chinese companies without due cause.

The European Competitive Telecommunications Association issued a strong statement a few days ago denouncing any bans of Chinese 5G suppliers for geopolitical reasons, emphasizing that "such decisions can only be justified on the basis of well-established facts".

Some countries have chosen to exclude Huawei from their 5G network simply because of the pressure being applied by the US although they know how much they will have to suffer both economically and technologically.

What the US is doing is politicizing the global development of 5G networks, and thus doing a disservice to a global environment for fair competition.

Under the pressure of the US, some countries have to take sides against their will. Rather than making a decision of their own, based on the merits of the technology and the cost alone, they have to think about whether they can afford to offend the US. Is this the global business environment all countries should accept?

Of course, it is not. The US' interference in global cooperation in the development of 5G networks by smearing China with lies will not last long. As long as China does a good job in its own development, the US will finally pay for what it is doing.