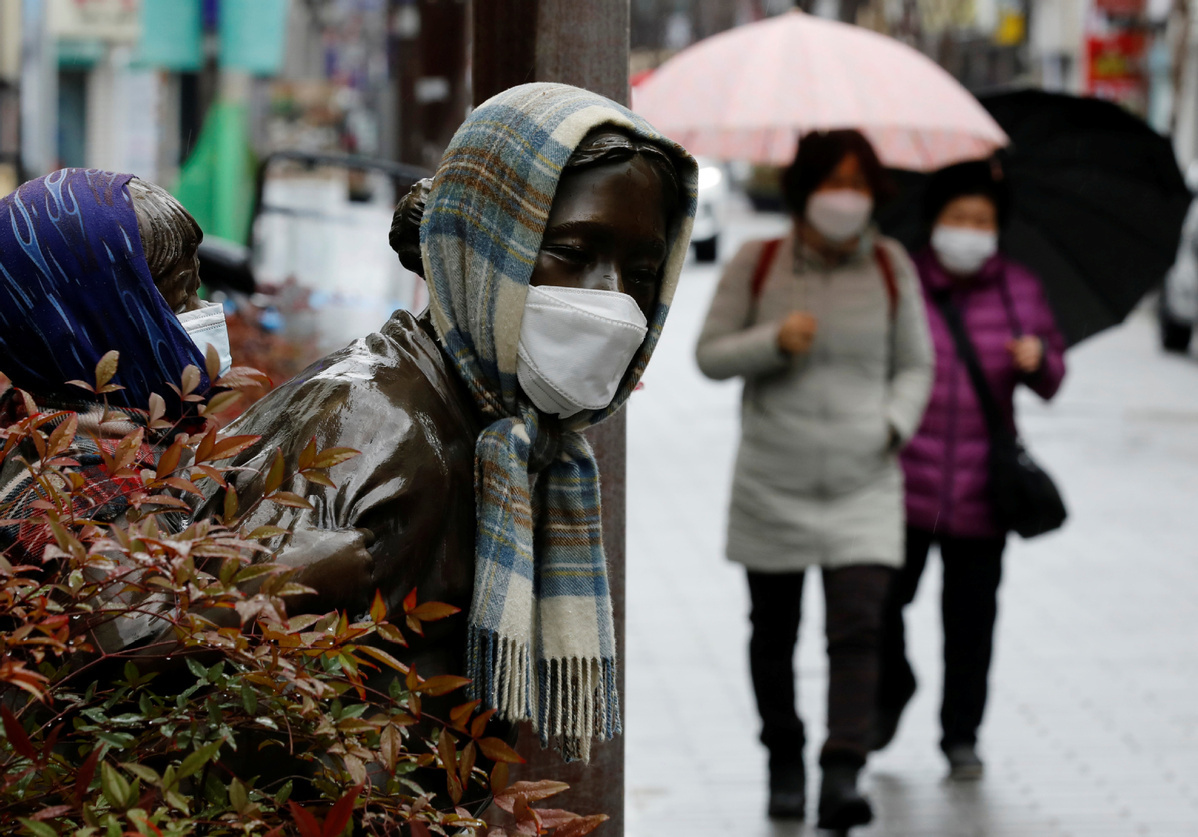 Women wearing protective masks walk past a statue also with masks on, following an outbreak of the coronavirus disease (COVID-19), in Daegu, South Korea, March 10, 2020.[Photo/Agencies]

A pandemic puts every country, every territory, every individual in the same situation where no one can rest assured believing he or she can be an exception.

With the novel coronavirus having now spread to more than 100 countries and showing no sign of abating, the World Health Organization has finally declared a pandemic and urged aggressive action from all countries to fight it.

Having declined to label it such before, it has done so now because of the "alarming levels of inaction". It has called for "urgent and aggressive action" from all countries. There is still time; the course of the pandemic can be changed, WHO's chief Tedros Adhanom Ghebreyesus said on Wednesday. But that requires countries "detect, test, treat, isolate, trace and mobilize their people in the response."

One of the few things regarding this pandemic that is worth celebration is that it has yet to wreak substantial havoc in the worst prepared parts of the world. If developed European countries such as Italy, Germany, France and the United Kingdom can be hit this hard, there is no imagining what it may do in the world's least-developed countries. Such a horror-movie scenario does not bear thinking about.

So the world needs to act — in synchronicity. Considering the initial accomplishments that have been made in China and some other parts of the world, like Singapore, there are ways to control it.

But as the continuous inflow of "imported cases" seen by China indicates, having the epidemic under control now does not mean that everything is hunky-dory and a country can sit back and relax while others fight their battles with the virus. The only way to nip this public health crisis in what is still its bud, is for all of us to respond together — before it is too late.

China has already offered logistics support to neighboring Japan and the Republic of Korea, and sent expert teams to Iran and Iraq, and is doing both with Italy. And while lending a hand to these hardest-hit nations, it is also working closely with the WHO to help the vulnerable, least-developed nations prepare. And with domestic needs for emergency medical supplies increasingly being met, it is assuming a bigger role in the global campaign against the pandemic.

These are manifestations of the five measures the Chinese Foreign Ministry laid out on Wednesday as the focus of China's efforts to help epidemic containment in other countries, which boil down to knowledge sharing and material aid. There lie both our strength and obligation as a responsible member of the international community.

Not everything feasible, acceptable, and effective in China may be so elsewhere. But what our brave medical professionals — from scientists in virology labs to doctors and nurses in hospital wards, and emergency service providers — have learned on the front lines firsthand may provide life-saving reference for their peers worldwide.