OPINIONS Lifting Wuhan lockdown & controlling risks should be in parallel

Lifting Wuhan lockdown & controlling risks should be in parallel 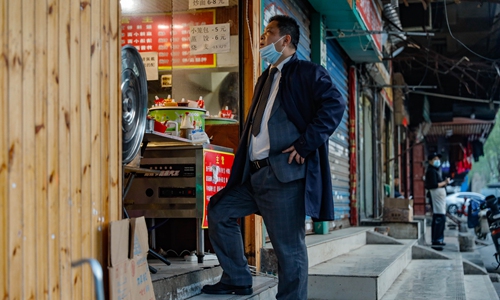 Wuhan is scheduled to lift travel restrictions and open outbound channels allowing people to leave the city on Wednesday. The moment finally comes after the city has been locked down for 76 days.

Authorities do not describe it as a "triumph," but instead emphasize that a zero increase in new infections does not mean zero risks and lifting the lockdown does not mean relaxing prevention measures.

It came two weeks after travel restrictions in Hubei were lifted. People across the country now still have concerns over those coming from Hubei or Wuhan, which even led to frictions in some places. This is normal before people adapt to the new dynamics. The lockdown and unlocking of Wuhan has been an incredible experiment in urban governance.

Chinese people don't feel completely relieved to see Wuhan open. New infection cases did emerge after restrictions on Hubei were removed. We are moving forward with ambivalence. There are two kinds of voices in public opinion. One is filled with worries. The other is full of expectations for resumption of work. As for residents of Wuhan, some are delighted to see the end of the lockdown while others complain the unlocking is not complete.

China is moving both boldly and cautiously, which may sound a little contradictory. But China is on an active yet prudent track. There are no precedents for Wuhan. The Chinese government has made the right decision to lock down the city because we believe in science. Now we still have to rely on science and explore how to resume work and production while preventing a potential second outbreak based on the actual situation.

We must have the courage to gradually normalize life in Wuhan and contain the risks that may still exist depending on the established prevention and control system. Now the world is finding it hard to eliminate the virus and it is no longer realistic to pursue absolute security. We must have the ability to contain the risks, preventing them from causing destructive damage, and build our new life. It is unrealistic to insist that Wuhan cannot be unlocked until it is 100 percent safe. That might lead to other severe problems.

The Chinese government should not loosen prevention and control efforts after the end of the lockdown or allow the hidden risks to spread again. China's national conditions have empowered the government to vigorously prevent and control the spread of the virus, while European countries and the US are somehow, voluntarily or not, moving toward herd immunity. China has greatly reduced the loss of life. We must take our path to the end and unwaveringly stick to our prevention and control efforts.

The virus fight in future will be quite complicated. The Chinese government has to pursue several goals at the same time. If China wants to maintain its hard-won strategic initiative, it must be able to combine the resumption of work, production and consumption with the continued fight against the epidemic. If China fails to do so, China won't score a real victory.

A basic criterion is: The rate of China's work resumption should reach the highest of all major economies. No mass outbreaks should reemerge. Although sporadic infections may return, the overall situation is stable for prevention and control.

The Chinese people need to become mentally stronger, not feeling as nervous as before when facing a new reported case. Local governments must guard against any sign of the epidemic while promoting resumption of work and production. This is a test for the entire Chinese society.

Some Western countries suggested work be resumed when they still suffered with the epidemic, causing greater risks to the prevention and control work. The slump in the US stock market reflects people's anxiety and fear. China cannot do the same.