OPINIONS Light at the end of the tunnel

Light at the end of the tunnel 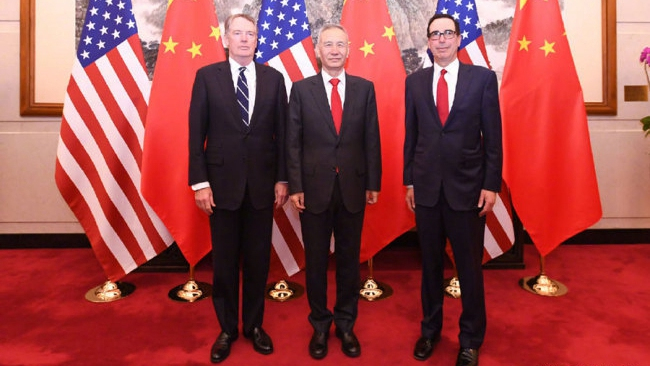 Finally we are seeing the light at the end of the tunnel. On Thursday, during the ninth round of the trade talk, US President Trump warmly received Chinese Vice Premier Liu He, and he appears to be very upbeat about the prospect of concluding a broad and comprehensive trade agreement very soon.

The tenth round will certainly be the occasion for the two presidents to preside over the ceremony of this historic agreement. After almost a year of meandering, the Sino-US relationship finally sees some hope of coming back to a controllable track, albeit the nature of this relationship has forever changed for good, from a cooperative one to a competitive-cooperative mixed bag.

Reportedly, two issues are holding up progress. First, the US side insists on only removing the second round of tariffs but keeping in place the initial, more severe, round of 25 percent tariffs on 50 billion US dollars' worth of Chinese exports. The second issue involves the enforcement mechanisms the US seeks that may infringe upon China's sovereignty.

The US side needs to be realistic and considerate of the political implications here in China with something as embarrassing as the above two demands. Let us remember that this trade war was initiated by Washington in the first place, and the agreement both sides are working on feverishly right now is supposed to restore the original condition before the trade war started.

With the 25 percent tariffs still imposed, it not only punishes, whereas it should welcome and appreciate, China's set of broad opening-up policies, but it is also connotative of a hegemonic international economic policy, further stoking nationalistic sentiment among the public in China. This is simply unacceptable.

Besides, the logic underlying the utility of this kind of arrangement doesn't hold water. If the US side is concerned about lax enforcement of the agreement on this side, it can snap back the tariffs anytime it wants.

This option is always there. What difference does it make other than hurting the 50-billion-US-dollar trade among American and Chinese businesses that are subject to these onerous tariffs?

The second issue regarding enforcement mechanisms is even more concerning to the sensitive sentiment of the Chinese public. Remember, this country has seen many humiliating episodes in history of Western powers ruthlessly intruding into China's sovereignty starting from the Opium War in 1839.

These are textbook cases enshrined in the mind of every Chinese ever since their high school days. It is simply unfathomable that today's ruling Party in China would swallow this kind humiliation again, especially in consideration of China already being the second largest economy in the world.

It is often said that we Chinese attach great value to face-saving. It is very true; however, this is not just a face-saving issue, it concerns the sovereign dignity of a permanent member of the United Nations Security Council.

It has been almost 10 months since the Unites States and China got into this trade war mess, which has caused mayhem not only in our two respective countries but also throughout the entire world.

Several days ago, the WTO revised down its forecast of global trade volume in 2019 from 3.7 percent to 2.6 percent. It places the blame squarely on the Sino-US trade tensions. A 1.1 percent reduction of global trade means 220-billion-US-dollars' worth of container goods will vanish from ports around the world, along with millions of jobs.

IMF Managing Director Christine Lagarde also said she is going to revise down her forecasts of global GDP growth for 2019, while citing the same trade tension reason.

Ten months is already too long for the business communities to bear. The Chinese side has placed orders for billions of dollars of American agricultural goods, and is committed to buying even more American energy products. It will continue to buy billions of dollars' worth of Boeing airplanes.

China has made oodles of concessions to address America's intellectual property concerns. It is about time the American side gives a bit at the negotiation table. President Trump said Beijing is easier to deal with than the Democrats in Congress. Then show us that is the case!