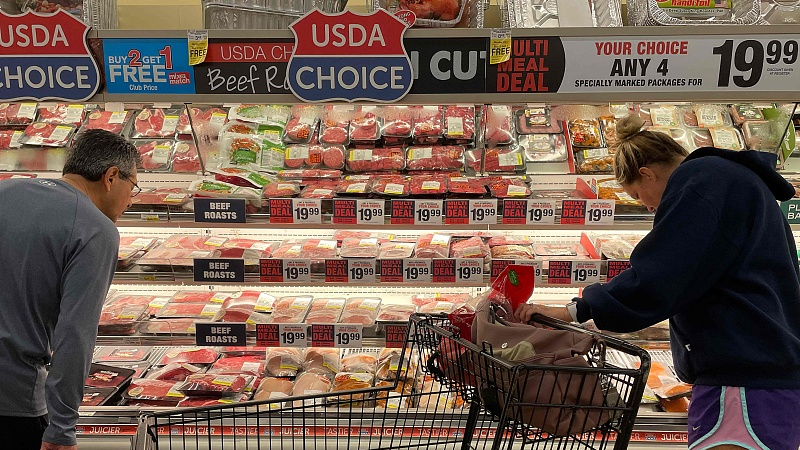 Consumers shop for meat at a Safeway grocery store as inflation continues to grow in Annapolis, Maryland, May 16, 2022. (Photo: CFP)

The United States and the European Union have imposed harsh economic sanctions on Russia for its "special military operation" in Ukraine in the belief that the sanctions will debilitate the Russian economy and bring an end to the conflict. However, the situation on the ground betrays such belief despite the EU unleashing six rounds of tough sanctions against Russia.

The Russian economy has taken a hit, no doubt, with the World Bank saying it is likely to shrink by 11.2 percent this year. The consumer price index has increased sharply and supply chains have been disrupted. On the other hand, the Russian ruble, which plummeted three months ago, has strengthened; it was its strongest in seven years against the US dollar on Monday.

The Economist and some other Western media outlets and observers have now highlighted the resilience of the Russian economy in the face of the harsh sanctions, crediting Russia's relatively closed economy and the high revenues it's earning due to soaring commodity prices for it.

What is clear is that the Russia-Ukraine conflict and the Western sanctions have hurt almost every economy in the world, China included.

Inflation in the EU reached 8.8 percent in May, and in the United Kingdom it hit 9.1 percent in the 12 months to May, the highest in 40 years. In the US, inflation skyrocketed to 8.6 percent in May, the highest since December of 1981. Also, US gas prices are hovering around $5 a gallon, prompting President Joe Biden to take a U-turn in his policy by hastily announcing a visit to Saudi Arabia in mid-July in a bid to ease oil supplies.

Earlier this week, EU leaders were shocked after Germany, Austria and the Netherlands announced they would revive coal-fired power plants to make up for the reduction in gas supplies from Russia, which is a potential blow to the EU's "Green Deal".

Besides, Senegalese President Macky Sall, now also head of the African Union, urged the EU on Sunday to allow African countries to pay for imported cereals and fertilizers from Russia whose banks have been excluded from the SWIFT payment system as part of the EU sanctions.

And Ben Smith, CEO of Air France-KLM, told CNN this week that the closure of Russian airspace in a tit-for-tat with the EU has forced many flights to fly extra hours, undermining the fight against climate change.

Moreover, the Organization for Economic Co-operation and Development has marked down its global growth forecast for the next two years. But when I asked OECD Secretary-General Mathias Cormann if the sanctions on Russia have impacted the global economy, he dodged the question and only blamed Russia for the problem. The response of the European Commission spokesman was similar when I asked him on Tuesday whether the EU would rethink its sanctions because of the wounds they are inflicting on the EU economy.

Economic sanctions have long been wielded as a tool by the US and the EU to bully smaller economies. But their sanctions have not helped meet their requirements, be it in the Democratic People's Republic of Korea, Iran or Venezuela－the latest being their failure to de-escalate the Russia-Ukraine conflict. What they have succeeded in doing, sadly, is punishing innocent civilians, especially women and children in the target countries.

The assumption that all Russian energy exports are to fund the Ukraine conflict is absurd, because they are mostly spent on food, education and healthcare for ordinary Russians. The Russia-Ukraine conflict is bad enough for the world. Western sanctions have made it worse, as they are threatening the global economy and people's livelihoods.

So calling the soaring global inflation "Putin inflation" as Biden did recently or blaming the global economic downturn on Russia is deceiving the world.

The world needs wisdom and diplomacy to help end the Russia-Ukraine conflict. And it needs wisdom, sincerity and humanism to end Western sanctions, and save innocent civilians from bearing the brunt of those sanctions.