On Thursday, during his visit to the Macao Special Administrative Region, President Xi Jinping observed that even "a table is large enough to stage a big opera". The dazzling trajectory of Macao's development since its sovereignty returned to China 20 years ago has demonstrated the pertinency of that remark. 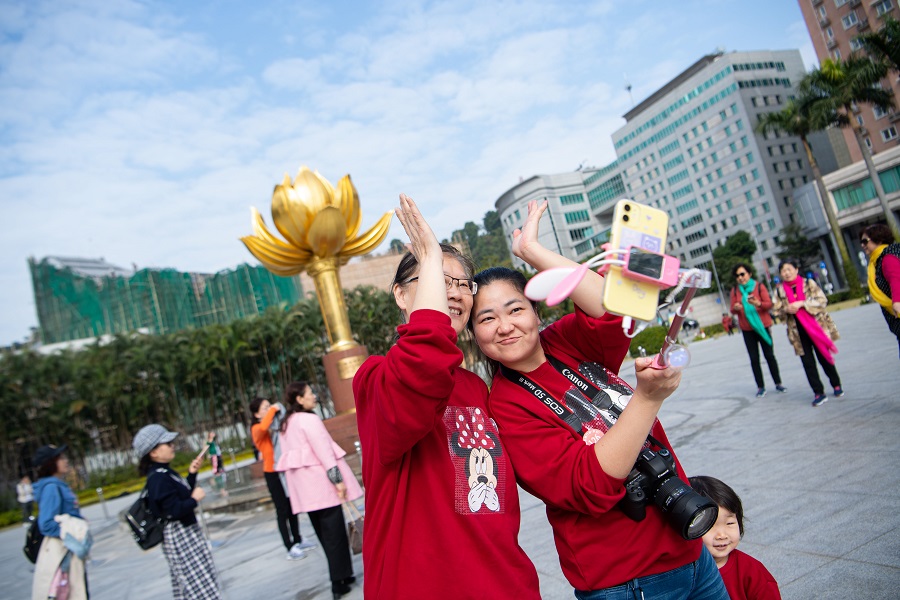 Visitors pose for a selfie at Golden Lotus Square, a tourist attraction and landmark, in Macao on Friday. (Photo: Xinhua)

Thanks to its law-based governance, the SAR administration has shaken off Macao's shady image of the past, strengthened its residents' sense of personal safety and ensured an orderly society in which different communities and people of different faiths harmoniously live and work together.

And under the framework of "one country, two systems", the SAR government and people have made outstanding achievements by integrating the SAR's development into the overall development of the country and complementing the mainland's reform and opening-up, greatly enhancing people's sense of well-being.

Macao's gross domestic product has expanded nearly eight-fold over the past 20 years. Last year, its per capital GDP had rocketed to about $84,000 from $15,000 in 1999; the average life expectancy had been extended by three years, from 80.7 years to 83.7 years; and with the introduction of 15-year free education, the college enrollment rate had risen from 32.3 percent to 80.7 percent. And the number of government subsidized houses has increased more than three times over the past decade.

These achievements have been underpinned by the SAR's active integration into the overall development of the mainland over the past 20 years, which has granted it broader development space and enabled it to diversify its economic structure and reduce its dependency on the gambling industry.

And to make its table a little larger, so it can stage what is now a bigger opera than ever, Macao has increased its land area from 22 square kilometers to 32 sq km by reclaiming land from the sea, and it is cooperating with the Guangdong government to develop the 106-sq-km Hengqin Island to its west, which has become a thriving economic development zone, and home to the new campus of the University of Macau.

When Xi visited Macao in January 2009, as the world was still trying to build a firewall to contain the global financial crisis, he stressed that although the SAR was facing difficulties, the country had solutions and the SAR should have hope.

His words were not empty reassurance.

Today, the bridge linking Macao with the Hong Kong Special Administrative Region and Zhuhai in Guangdong province is both a tangible testament to those solutions and a breathtaking manifestation of that hope.

A concrete link between the mainland and the two SARs, the bridge is a symbol of both the nation's spirit and its aspirations for the future.

It is also a tangible means of boosting personnel and trade exchanges among Guangdong, Hong Kong and Macao to promote and enhance the competitiveness of the Greater Bay Area.

The outline of the development plan for the Guangdong-Hong Kong-Macao Greater Bay area sets out a clear path for Macao's future, positioning the SAR as a world-class tourism and leisure center, and a commerce and trade cooperation service platform for China and Lusophone countries within the Belt and Road Initiative.

On Wednesday, while visiting Macao to observe Chief Executive Fernando Chui Sai On hand over the keys of office to his successor Ho Iat Seng and deliver a speech at the ceremony marking the 20th anniversary of Macao's return to the motherland, Xi praised the outgoing CE for not only faithfully implementing the principle of "one country, two systems", but also for tailor-making measures to improve the lives of Macao residents. His words once again highlight that Macao's biggest achievement has been improving people's well-being and that the plan to develop the Greater Bay Area is people-centered.