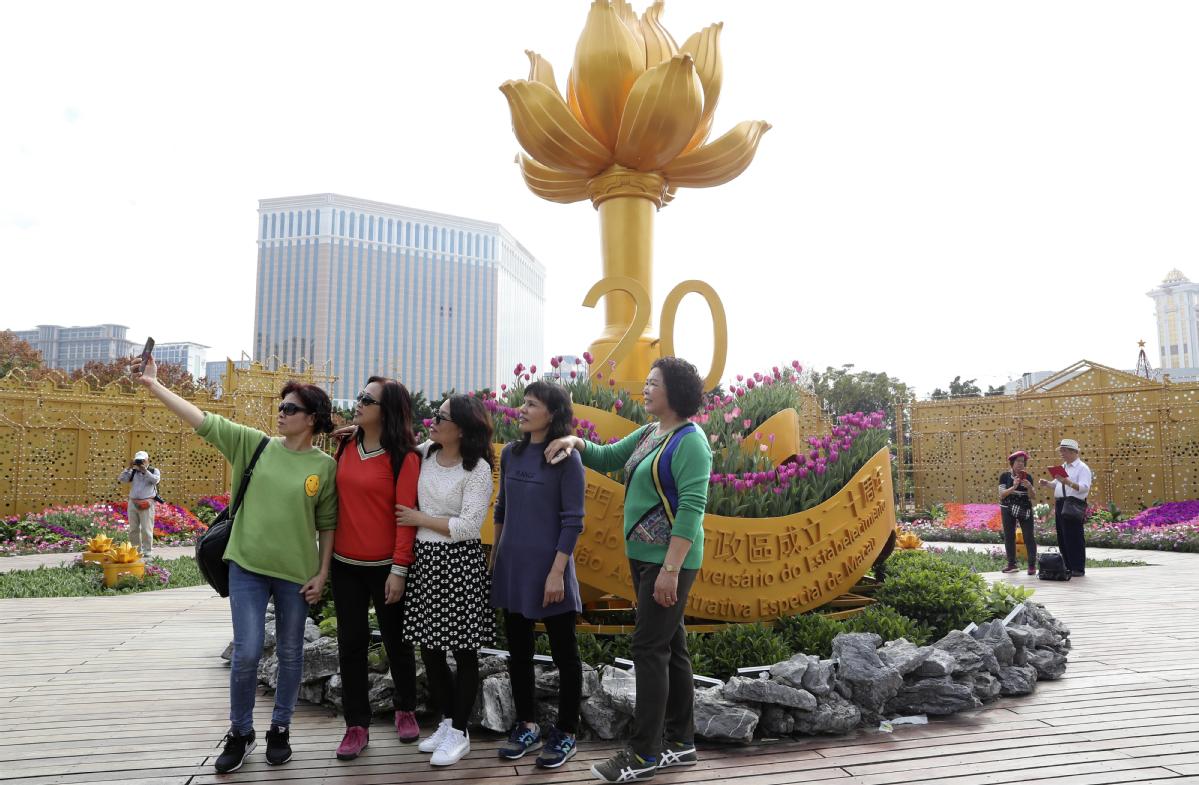 Tourists from Guangzhou, Guangdong province, take photos in front of a flower bed celebrating the 20th anniversary of Macao's return to the motherland in Macao on Tuesday. (FENG YONGBIN/CHINA DAILY)

President Xi Jinping said in Macao the achievements the Macao SAR has made in the past 20 years would make anyone in the city proud. The people of the motherland and central authorities are all proud of Macao for sure. The experience the SAR has had in implementing “one country, two systems” is unique to its own characteristics, but makes a great example of success through due diligence nonetheless. With the central government’s new policy support announced by the visiting State leader, Macao will, no doubt, have a more magnificent future.

Xi spoke highly of the Macao SAR government’s commitment to implementing “one country, two systems” faithfully and administering the city strictly according to the Basic Law of the Macao SAR, as well as the nation’s Constitution. Indeed, the SAR government deserves a stamp of approval for leading the community to attain great success in almost every endeavor, from contributing to national security to maintaining social stability, boosting economic development and improving livelihoods.

As a matter of fact, Macao’s development in the past 20 years is nothing short of phenomenal. Its GDP is now eight times that of 1999; its GDP per capita is the second-highest in the world; the jobless rate has fallen from 6.3 percent to 1.8 percent; the median monthly income of its population has grown from less than 5,000 patacas ($620) to 16,000 patacas today; the average life expectancy of its population has reached 84 years.

Macao’s metamorphosis from a backwater little town into a tourist destination of world renown is testament to the great vitality of “one country, two systems”. Since the day the Macao SAR was established, the city has been a part of the constitutional order governance system of the nation. The executive-led administration has been well maintained, with the executive, legislative and judicial branches of the government all performing their duties diligently in good balance and coordination. This has consistently facilitated economic development and helped improve the well-being of Macao residents, who are generally happy and content.

In terms of upholding national security, the Macao SAR government has taken preventive measures before anything untoward happens. It enacted a national security law according to Article 23 of the Basic Law years ago and amended its electoral law with statutory safeguards to prevent separatism from taking root. In 2018, it formed the Commission on Upholding National Security, chaired by the chief executive of the Macao SAR. All those proactive steps have contributed to national security and enhanced social stability. Enhanced national education has also played a great part in maintaining political and social stability.

It’s fair to say Macao’s great achievements would not have been possible without the strong support of the motherland. Since the SAR signed the Closer Economic Partnership Arrangement with the mainland in 2003, the central government has given Macao great support for diversified development to ease its dependence on the gaming industry, including allowing Macao to lease a sizable piece of land on neighboring Hengqin Island, greatly expanding the city’s room for development.

Xi said the fruitful implementation of “one country, two systems” in the Macao SAR serves as a success model with Macao characteristics for keeps. Macao has a magnificent future to look forward to. It has no reason not to aim even higher, because the central government will be there to support the SAR every step of the way!