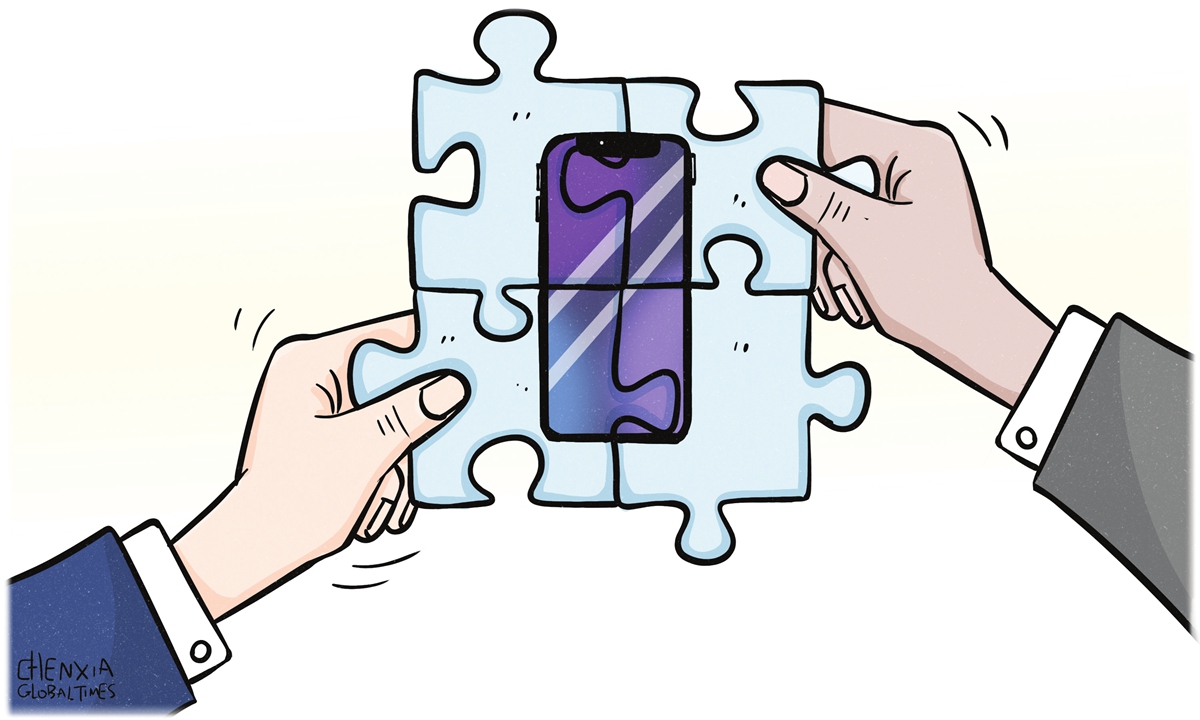 In an effort to diversify its production away from China, Apple Inc has started producing the iPhone 14 in India.

Some Western media outlets have been recklessly claiming that the shift of some production from China to its neighbors will dent China's manufacturing base, but in fact the opposite appears to be true.

US investment bank J.P.Morgan's analysts predicted that Apple will produce one out of four iPhones in India by 2025, Deutsche Welle reported on Sunday. If the claim is accurate, some observers believe it will be a "radical shift" for the tech giant, as about 95 percent of Apple's products are reportedly produced in China at present. They hype the narrative that China is in danger of losing its manufacturing advantage to India or Vietnam, but those people have ignored an important aspect of the story.

The Washington Post reported on Wednesday that a group of US senators has asked the nation's top intelligence official to analyze the threat posed by Apple's reported plan to use memory chips from Chinese manufacturer Yangtze Memory Technologies Co (YMTC) for its new iPhone 14. Apple said in an earlier statement that YMTC chips are not used in any of its products, but it was evaluating whether to use YMTC chips for some iPhones to be sold in China, the Washington Post reported.

A closer look into the research and development process of iPhone 14 shows that at a time when the US is frequently suppressing China's high-tech industry, Apple is still closely connected to the global manufacturing center - China's supply chain, and it will be extremely difficult for Apple to truly break away from China.

Technological advancements in China have reached new heights over the past decade. On the list of the top 200 global suppliers released by Apple in 2021, there are 96 Chinese companies, accounting for nearly half of the total.

China has a complete industrial chain, well-developed logistics and supporting systems, and is increasingly becoming an innovation force to be reckoned with. The research, development and application of cutting-edge technologies have made China a major player in the global tech landscape and helped the nation move up the manufacturing value chain. That's why US politicians are so nervous about Apple's reported plan to use Chinese-made memory chips. China's advantages in the manufacturing sector are growing, not shrinking.

While labor-intensive industries in southern China see demographic dividend diminishing due to the rising labor costs, some manufacturers plan to move processing bases out of China to other Asian countries such as India and Vietnam. The relocation of labor-intensive production away from China is a natural process driven by China's manufacturing upgrade. More importantly, direct investment and industrial transfer have strengthened business ties between China and India.

Some Western media outlets have tried to exaggerate the competition between China and India in the manufacturing field and they said the competition will end up with a lose-lose situation. If India wants to compete with the China in the industrial chain in global mobile phone manufacturing, it must take into account the completeness of the overall supply chain and the R&D strength. According to industry analysts, it may take more than 10 or even 20 years for India to create an industrial chain comparable to that of China. The flight of manufacturing out of China is overblown.

Supply chain restructuring has been accelerated. On the one hand, some labor-intensive production has been moved from China to other emerging economies such as India or Vietnam, on the other hand, some Chinese high-tech enterprises have begun to replace US companies as suppliers for core components like memory chips. The two parts together tell the full story of China's development in the manufacturing sector.

Supply chain restructuring is a natural process, and there should be no artificial intervention, US interests in particular should not be the force to prevent the reorganization of this industrial chain.

The China-India manufacturing competition rendered by Western media distorts the facts. China and India should see that in the process of upgrading and restructuring the Asian industrial chain, there are still broad prospects for cooperation and a mutually beneficial and win-win outcome.