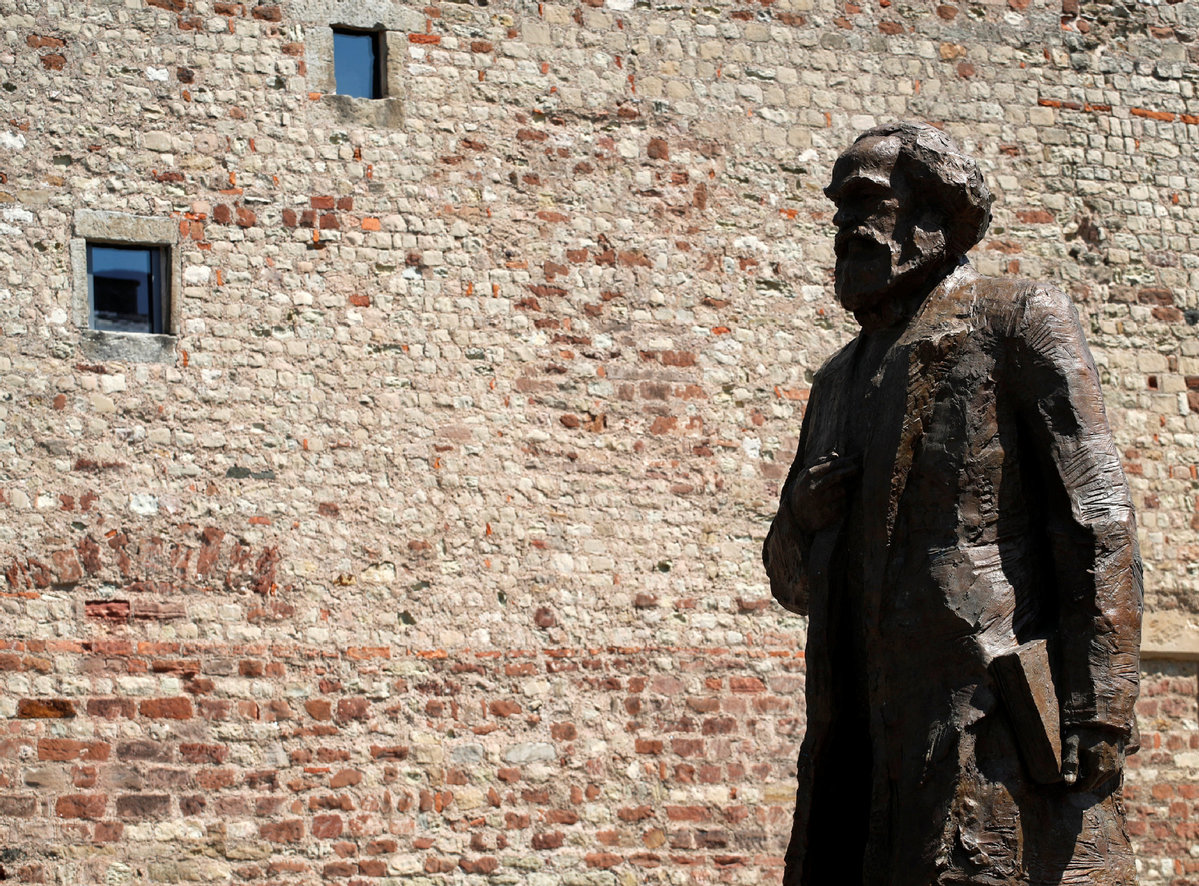 The bronze statue of Karl Marx, created by Chinese artist Wu Weishan to mark the 200th birth anniversary of the German philosopher, is unveiled in his hometown Trier, Germany May 5, 2018. [Photo/Agencies]

Editor's note: This year marks the 200th birth anniversary of Karl Marx, whose philosophy has changed the course of world history and deeply influenced modern China's development. What is the practical significance of Marx and Marxism today? Three experts share their views on the issue with China Daily's Liu Jianna. Excerpts follow:

Liu Dongchao, a professor at the Department of Social and Cultural Studies, Chinese Academy of Governance

Marxism, much more than any other philosophy or school of thought, has influenced China's modern history. Yet different people assess its impact on China differently.

To begin with, Marxism has become the guiding thought of the vanguard of Chinese society, offering the methodology to help resolve the issues and meet the challenges in different times. In modern China, the Communist Party of China, as the vanguard of society, has made Marxism one of the nations' guiding thoughts. By using Marxism as its ideological weapon and through painstaking efforts, the Party has realized the major goals of national liberation, State building, and reform and opening-up in different times.

Second, Marxism has been well incorporated into the Chinese national spirit and become one of its most important parts. China has established its unique ideological system and spiritual characteristics based on thousands of years of civilization. In modern China, the introduction of Marxism and its integration with China's liberation and the construction of New China have made it an essential part of the national characteristics.

Third, Marxism has become the core of advanced socialist culture after several decades of localization in China. China has progressed by leaps and bounds in the cultural field and formed an extremely dynamic socialist culture, while the localization of Marxism including Xi Jinping Thought on Socialism with Chinese Characteristics for a New Era serves as the ideological soul of this culture. Therefore, Marxism is expected to continuously play the guiding role in the continuous development of advanced socialist culture.

Socialist China is a product of Marxism

Li Haiqing, a professor at the Institute of Marxism, Party School of the CPC Central Committee

The year 2018 marks the 200th birth anniversary of Marx and the 170th anniversary of the publication of The Communist Manifesto. These are special occasions because Marx's philosophy has profoundly changed the world and influenced the history of China.

The Soviet Union, the first socialist state in the world was established in 1917 based on the principles of Marxism. And the October Revolution gave us the philosophy of Marxism-Leninism, which helped establish the Communist Party of China in 1921.

Since then China has developed a strong core of leadership with clear direction. And the localization of Marxism in China has transformed China's social landscape and course of its history, with the New Democratic Revolution, socialist revolution and construction, socialism with Chinese characteristics all being great ideological creations - a combination of the basic principles of Marxism and China's real situation.

Martin Jacques, a senior fellow at the Department of Politics and International Studies, Cambridge University, and a visiting professor at Tsinghua University

Throughout his life Marx critiqued capitalism essentially in Europe, where it was most advanced though he was also interested in other parts of the world. But it was toward the later part of his life that his philosophy became the basis of political movements both in the West and the East, and only at the beginning of the 20th century that his ideas helped establish the first socialist state, the Soviet Union, and later New China in 1949.

Yet the success of these movements largely depended on the ability of their leaders and major thinkers to apply Marx's philosophy to their own countries and societies. And in many ways, Chairman Mao Zedong was a genius for his original, creative and successful application of Marx's philosophy to China and his contribution to Marxism.

One problem with the study of Marxism has been orthodoxy, as many Marxist thinkers tend to treat the philosophy like the Ten Commandments. This could lead to the ossification of Marxism. As an original and creative thinker, Mao was bold enough to apply Marxism flexibly to China's real conditions and argued that the leading force of political change in China would be the peasantry, not the proletariat. His foresight won extensive support for the CPC among the masses and facilitated the Party's success.

Thereafter Deng Xiaoping, the chief architect of China's economic reform, carried forward this creative approach to Marxism and opened China's economy to the outside world with a reconceptualization of socialism.

Chinese leaders have a tradition of rethinking and developing Marxism instead of treating it as written in stone. And therein lies their success.