OPINIONS Mattis should listen rather than criticize during visit to China

Mattis should listen rather than criticize during visit to China

US Defense Secretary James Mattis is scheduled to visit China from June 26 to 28, his first official trip to China, and eighth to Asia, in the 17 months since assuming office. He will also make stops in South Korea and Japan. 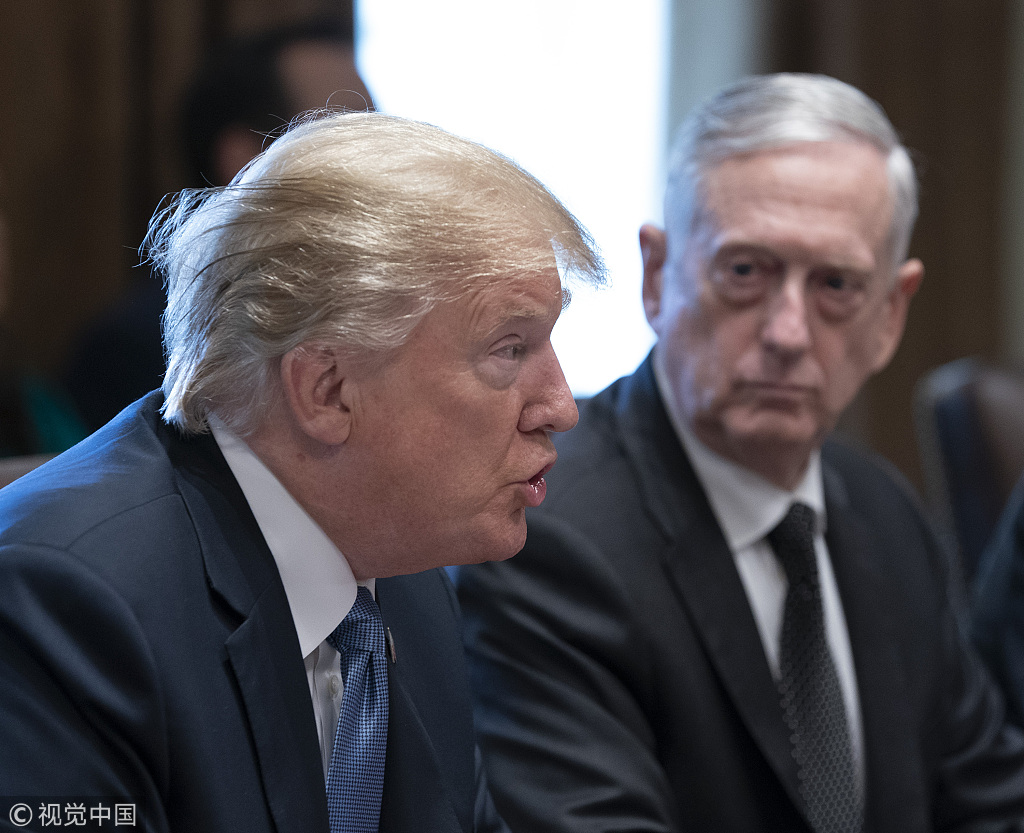 The visit comes at a time shortly after Washington labeled Beijing as a strategic "competitor," and when Sino-US ties are witnessing escalating disputes. Apart from the threat of a trade war, the US has expanded official exchanges with Taiwan and withdrawn China's Rim of the Pacific Exercise invitation over the South China Sea issue. Mattis has openly accused China of resuming the imperial tributary system.

Mattis' visit suggests that the Trump administration is still willing to hold military dialogue with China. Such bilateral talks will alleviate tensions between the two countries and is better than blindly guessing the other's "strategic ambitions."

Both sides should learn to be good listeners. The US is adept at expressing itself and capable of making its voice loud enough to influence international public opinion. China lags far behind the US in this regard. Thus, Washington should try to understand Beijing's perspective by standing in Beijing's shoes rather than turning the dialogue into a chance to intimidate China.

We hope the US can view China's defense strategy, as well as the corresponding relations between China's national strategy and the country's economic and societal development, in a correct way. China never seeks expansion. The country "going global" is the result of normal spillover of its rising influence and shouldn't be maliciously interpreted by the US.

China has no intention or ambition to challenge US global influence. On the contrary, Chinese are deeply concerned about Washington's containment plans against Beijing. The capability to safeguard China's national security, interests and the rights to develop, and deter outside powers from forcible actions against China are what Chinese are pursuing.

China reiterates adherence to the no-first-use principle of nuclear weapons. The world receives our utmost sincerity of not challenging the current international order. But meanwhile, China is indeed worried about being strategically blackmailed by the US, and therefore needs to strengthen its nuclear force.

The South China Sea is a gateway to China and an intersection of international naval passages. The US has been playing an active role in the region amid territorial disputes. This has posed comprehensive challenges to China. China's construction on Nansha Islands is a decision made after taking into consideration the need to safeguard the country's sovereignty and regional peace. China hasn't recaptured any islands occupied by other countries, or deployed offensive operations in the region. Beijing has been exercising restraint in the face of provocation.

It is strategic discrimination against China for the US not to accept China's construction works in the South China Sea. The US has hundreds of military bases all over the world, but is unwilling to see China's enhanced military projection capability. This is hegemonic mentality and is not constructive in managing major-power relations.

If the US fails to understand China's sense of insecurity, or misinterprets the necessity of the actions that China has taken to alleviate this sense of insecurity, tensions will be inevitable in Sino-US ties. We hope Mattis can take advantage of this visit to seek maximum common ground with China.