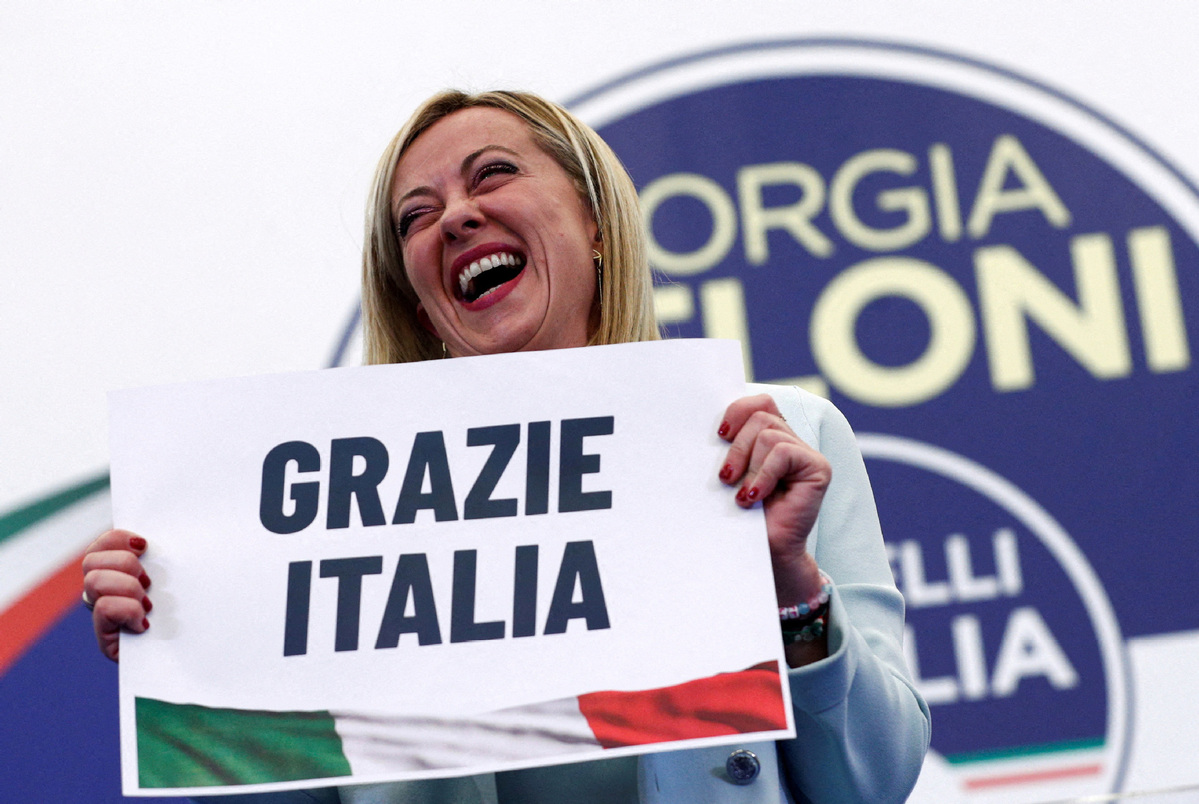 With her party, Brothers of Italy, winning the most votes in the country's national election, Giorgia Meloni is set to become Italy's first female prime minister.

That has aroused widespread worries in Europe, as the Brothers of Italy is a euroskeptic, far-right, populist party, and the only major political party that refused to join outgoing Mario Draghi's national unity government. Draghi resigned on Thursday after losing a vote of confidence within the coalition. Yet it might be too early to worry about politics in Italy making a turn to the ultra-right. Some Italian voters have voted in favor of Brothers of Italy, which has neo-fascist roots, but that does not necessarily mean Italy is turning fascist.

Although the union formed by the centrist and right-wing parties gained about 44 percent of the votes in Sunday's election, of which Brothers of Italy won 26 percent, the turnout for the election was a historic low of 64 percent and about 30 percent of voters chose a different party than they did in the 2018 elections. Analysts say the meteoric rise of Brothers of Italy is symptomatic of the Italian public's dissatisfaction with the status quo rather than a significant surge to the right.

Italy's economy has been suffering as a result of the COVID-19 pandemic and the global economic recession. In 2021, the unemployment rate in the country reached 9.83 percent, which prompted almost all the major political parties to promise tax cuts, more jobs and better welfare in their election campaigns.

However, Italy's public debt has been more than 150 percent of its GDP for two consecutive years, and its financial deficit is expected to be as high as 5.6 percent. No one knows where the money needed to fulfill the promises will come from.

Despite her euroskeptic rhetoric, Meloni will not want to jeopardize the 191.5 billion euros that is Italy's share of the European Union's 750 billion euro pandemic recovery package, which comes with certain reform and investment conditions.

Nonetheless, her success is further evidence of a rightwing, EU-skeptic swing in public sentiment in Europe. If the EU is to hold together, more concrete actions are needed to improve people's livelihoods to counter the centrifugal force of public dissatisfaction.

It has become convenient for Western politicians to blame China for their countries' ills, and adopt a tough stance toward the country to show they intend to remedy the problems. Meloni has been no exception. Yet when it comes to the crunch they know that China is a key partner of their countries. The bilateral trade volume between China and Italy, for instance, was $55.2 billion in 2020, 0.4 percent higher than that of 2019. And in the first 10 months of 2021 alone, the volume jumped by 37 percent year-on-year to $60.3 billion.

For the benefits of both countries it is to be hoped the new Italian government continues to be practical in its policy toward China, as there is huge potential to be tapped in their cooperation.