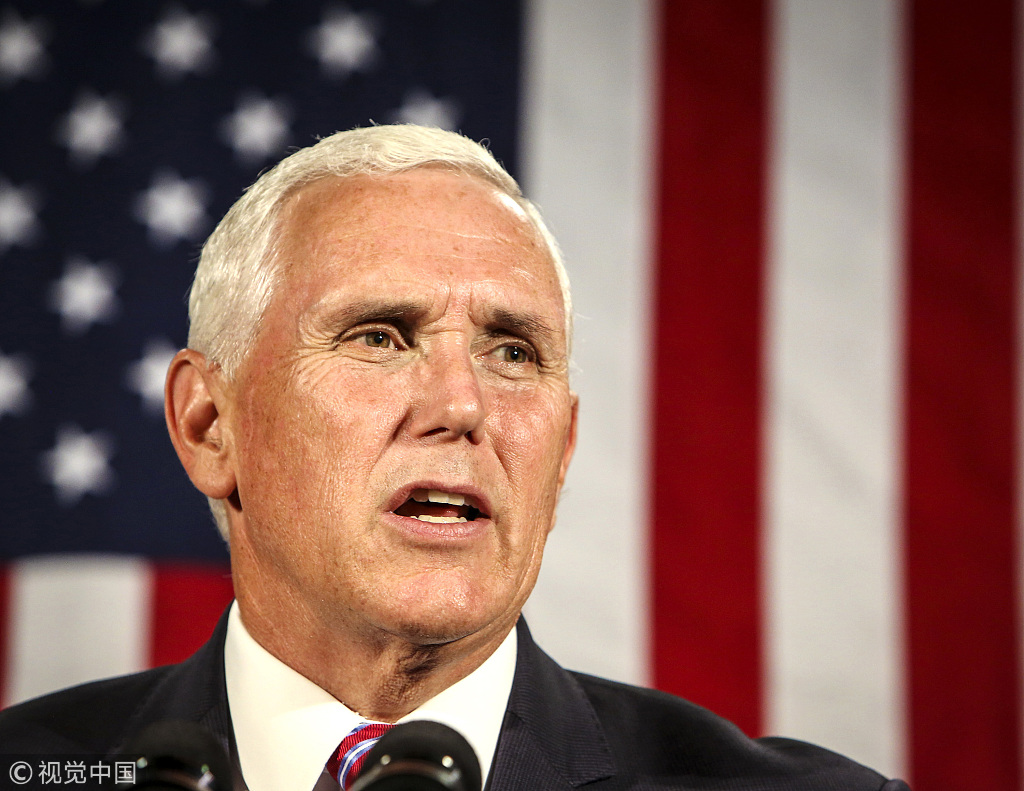 During the National Day holiday in China last week, United States Vice President Mike Pence delivered a speech in which he boasted about the strength of the United States, and criticized China's development ambitions. The speech was translated into Chinese and published by the U.S. Embassy in China on their official WeChat account, enabling it to be readily ridiculed by Chinese netizens.

In his speech, Pence unleashed a verbal attack on the greater part of China's history over the past one hundred years. Some young netizens who paid attention to the speech decided to brush up on their history, and found that Pence's view of events was often laughable.

"It is remarkable to think that only five years after our nations had fought together, we fought each other in the mountains and valleys of the Korean Peninsula. My own father saw combat on that frontier of freedom," he said. Some Chinese netizens were quick to point out that the United States military smashed and burned its way up towards China's doorstep. In order to defend their country's sovereignty and territory, the Chinese People's Volunteers "crossed the Yalu River valiantly and spiritedly", as says a classic army marching song.

The Vice President also said, "We rebuilt China over the last 25 years." Twenty-five years ago China was at a crossroad, deciding on its path to development. It was then that China's leader Deng Xiaoping said, "Let whoever opposes reform go to sleep." He said this during his history-making Southern Tour, which gave a massive boost to the country's policy of Reform and Opening up. It was at this moment that China stepped up the pace of its move towards becoming a market economy. At the same time, the United States was busy celebrating the disintegration of the Soviet Union, and warning that China would be the next big global threat. In 1992, China's GDP was 2.72 trillion yuan; by the end of 2017 it was 82.71 trillion yuan. This was, as some Chinese netizens said, the result of hard work by the Chinese people, and not some gift from the United States.

Pence also said, "At the University of Maryland, a Chinese student recently spoke at her graduation of what she called the ‘fresh air of free speech’ in America. The Communist Party's official newspaper swiftly chastised her. She became the victim of a firestorm of criticism on China's tightly-controlled social media, and her family back home was harassed." This observation led to more ridicule from Chinese netizens, as Pence grossly mischaracterized why she came in for such harsh criticism in China. Many Chinese netizens attacked her words because her decision to launch a broad-brush attack on China was little more than an insincere attempt to please her American hosts and her audience. As a Chinese netizen said, "Mr. Pence doesn't know today's China and the Chinese people. No wonder his remarks were not to the point and opened him up to ridicule."

But the biggest laugh that netizens got from Vice President Pence's speech, which also sparked the ridicule of many American netizens, was his accusation that "China wants a different American President." Many Americans on Twitter started replying "So do we!" And as some Chinese netizens noted, isn't interfering in the domestic politics of another country a longstanding habit of the United States? And some were quick to point to the tight race the Republicans are facing in next month's mid-term elections, which is why Pence fell back on the old trick of using China as a scapegoat for America's domestic problems.

Just last month, President Donald Trump bragged about his achievements and promoted his policy of "America First" at the United Nations. It triggered a burst of laughter from the participants at the General Assembly. We've become the laughing stock of the world, said many American media commentators.

Another netizen pointed out that Pence has always been seen to play a more neutral and moderate role in the Trump administration. This is why the many smears in his speech left many people in China feeling disappointed. In early September, The New York Times published an article by an anonymous senior official of the White House called "I Am Part of the Resistance Inside the Trump Administration", which complained about President Trump's "amorality" and "reckless decisions". The American media was rife with speculation about Pence's role in its publication, which is why some observers in China see Pence's fiery speech as some sort of misguided show of loyalty to President Trump. Chinese people have always believed that it is important to set your own house in order before you criticize someone else, but this is not, it seems, a sentiment shared by the American Vice President.

When President Trump spoke, the whole world laughed; when Pence spoke, Chinese netizens laughed, said a Chinese netizen. But now the jokes are over, and it's time for China to get back to the serious work of addressing the problems the country still has to solve along its path towards development. Because, regardless of Pence's barrage of criticism, China will continue to move forward, to build partnerships with countries around the world, and to play its part as a responsible member of the community of nations – and not be the butt of a joke for the world.