OPINIONS Money’s not the problem as lawmakers tackle spending bill

Money’s not the problem as lawmakers tackle spending bill 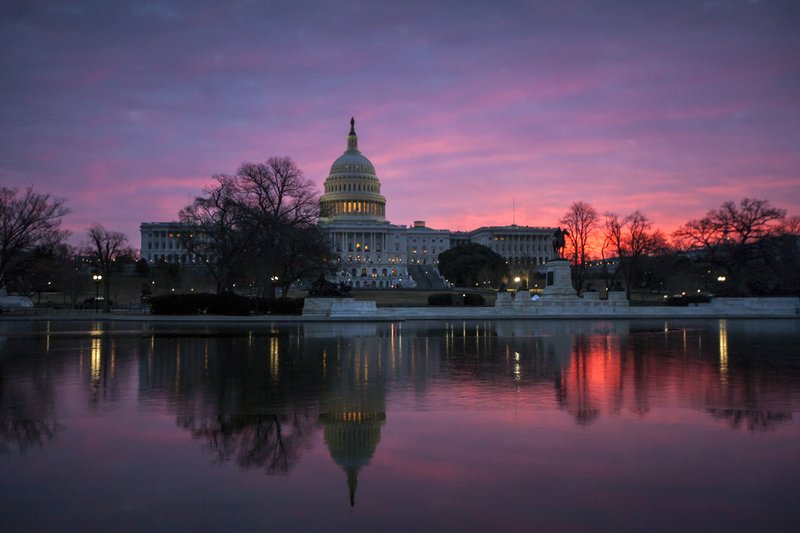 Money’s not really the holdup in talks on a huge $1.3 trillion spending bill that’s making its way through Capitol Hill.

It’s battles over abortion and President Donald Trump’s U.S.-Mexico border wall that are roiling negotiations on the massive measure, not to mention that Trump has threatened to veto the entire bill over an expensive railway project sought by Senate Democratic leader Chuck Schumer of New York.

The must-do measure is almost six months behind schedule and lawmakers are scrambling to forge an agreement to meet a March 23 deadline to avoid another government shutdown. At its core, the bill would flesh out last month’s bipartisan budget deal and give both the Pentagon and domestic Cabinet departments 10 percent increases over current levels, boosts long sought by Republicans and Democrats alike.

The agreement on increases opened up $118 billion in spending over current levels, including war costs. That has shifted the focus away from spending to myriad side issues hitched to the massive measure, including campaign finance regulations, internet sales taxes, and a variety of oft-litigated GOP provisions on the environment, Wall Street, so-called Obamacare and other issues.

Many of the GOP policy measures are again destined for the garbage since Democrats — whose votes are needed to pass the budget-busting measure — are so strongly opposed.

“We always manage to have a successful outcome at the end if people really want to work together and get a deal,” said Rep. Nita Lowey of New York, the powerful top Democrat on the House Appropriations Committee.

Trump has thrown a potential wrench into negotiations by threatening to veto the whole package if a $900 million payment is made on the Hudson River Gateway Project” a $30 billion plan to build a new tunnel and make other critical improvements to ease rail and transit congestion in the region.

The president’s threat is seen as a slap at Schumer, Trump’s powerful Democratic rival for whom the project is a top priority. Schumer suspects, as do many lawmakers in the Capitol, that Trump’s opposition to the project is aimed at winning leverage to fund the border wall, but the brinkmanship is adding uncertainty to the negotiations.

Other nettlesome issues involve abortion and Planned Parenthood, specifically a Senate provision that would guarantee the organization is eligible for much of almost $300 million allotted for family planning grants. Planned Parenthood is loathed by anti-abortion lawmakers dominating House GOP ranks.

The language, negotiated by Sens. Roy Blunt, R-Mo., and Patty Murray, D-Wash., is vehemently opposed by House conservatives, who already face the prospect of seeing their efforts to move in the opposite direction and strip away all federal funding for Planned Parenthood again going for naught.

For their part, top Democrats like Schumer don’t appear to be standing as firmly against Trump’s $1.6 billion first installment on his $18 billion or so border wall. Democrats blocked the request last spring, but have softened their position by voting for the wall as part of a failed effort last month to offer protection to young immigrants brought to the U.S. illegally as children.

Lowey said wall funding was “subject to negotiation.” But she said Democrats would stand firm against an “unacceptable” provision backed by House Speaker Paul Ryan, R-Wis., that would strengthen “conscience protection” for health care providers that refuse to provide abortion.

The Ryan-backed provision was one of the final items dumped overboard last spring and could be consigned to the same fate this time around.

“I’ve consistently made clear that expanding restrictions on women’s access to the full range of reproductive health care — including at trusted providers like Planned Parenthood — is a complete nonstarter in our negotiations in Congress,” said Murray.

Meanwhile, powerful Senate Majority Leader Mitch McConnell, R-Ky., wants to revive federal subsidies to help the poor cover out-of-pocket costs under the Obamacare health law in keeping with a promise he made last year to Sen. Susan Collins, R-Maine, as a condition of winning her vote for Trump’s tax bill. But that measure could also get hung up over abortion.

McConnell is again pushing a tweak to campaign finance laws to give party committees like the National Republican Senate Committee the freedom to work more closely with their candidates and ease limits to permit them to funnel more money to the most competitive races. Democrats have blocked the provision before.

In the House, Rep. Kristi Noem, R-S.D., is waging a fierce but uphill battle to attach legislation to permit states to require out-of-state online retailers to collect sales taxes, while House Energy and Commerce Committee Chairman Greg Walden of Oregon is pressing to attach telecommunications bills including a measure to free up airwaves for wireless users in anticipation of new 5G technology.