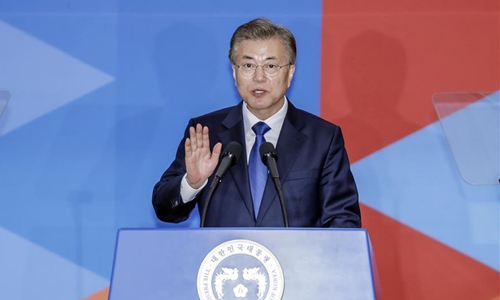 Since South Korean President Moon Jae-in took office in 2017, the country's progressive and conservative parties have been in serious opposition. The two parties handicapped each other in the national assembly, making it difficult for the ruling party to carry out its foreign policy. In the 21st legislative election held on April 15, the ruling Democratic Party of Korea won a landslide victory. This gives the Moon administration the ability to push forward its foreign policy.

South Korea's foreign policy toward the US will not see big adjustments. The country will still make its alliance with the US the cornerstone of its foreign policy and security, and further consolidate it. However, in terms of military and political diplomacy, South Korea may not tilt too much toward the US, and is unlikely to join the US-advocated Indo-Pacific Strategy.

South Korea will continue to seek a balance between China and the US. Generally speaking, since China and South Korea established diplomatic relations, the progressive parties have held a friendly attitude toward China. The THAAD issue once drove Beijing-Seoul relations into a ditch. During Moon's visit to China in 2017 after his inauguration, South Korea made a commitment to the "three nos" on the THAAD issue - there had been no request, no consultation, and no decision made by the US or South Korea. China and South Korea maintain communication and coordination on the Korean Peninsula nuclear issue and steadily promote regional cooperation. The economic and cultural exchanges between the two countries damaged by the THAAD issue have been gradually restored.

Currently, economy recovery and development are the thorniest problem confronting the South Korean government. Therefore, when developing relations with China, the Moon administration's priority will be economic and trade cooperation. To maintain smooth economic cooperation, South Korea will adopt friendly and cooperative diplomacy with China. But it's worth noting that South Korea's China policy is also influenced by its relations with the US and the general situation on the peninsula.

During Moon's term in office, South Korea's tough diplomacy toward Japan will not change. Tensions between South Korea and Japan have risen from disputes over historical and territorial issues to a trade war. In regard to the history of Japanese aggression, South Korea insists on accountability. Moon has scrapped an agreement on the "comfort women" issue struck under the previous administration of Park Geun-hye, and Moon has ordered Japanese firms to compensate people who were exploited as forced labor.

In 2019, when Japan resorted to sanction means to fight back, South Korea announced the suspension of the two country's General Security of the Military Intelligence Agreement. The disputes between Seoul and Tokyo now involve both economic and military diplomacy. These disputes are unlikely to be resolved in the short term. Adhering to a tough stance toward Japan serves Moon's strategy to build consensus and shift contradictions at home.

In terms of political diplomacy, South Korea and Russia's common concern mainly lies in the nuclear issue on the peninsula. As China and Russia adopt coordinated policies on this issue, South Korea will maintain diplomatic communication with Russia. Since the THAAD issue affects Russia's strategic security, the issue will influence South Korea-Russia relations.

Moon has advocated greater diversity in South Korea's diplomacy. Apart from developing relations with the above four powers, South Korea will also strive to develop its diplomacy with Southeast Asia, India and Central Asia.