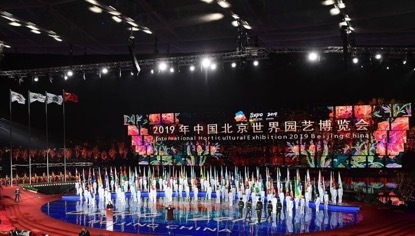 China is inviting countries around the world to join in its efforts in pursuing greener growth so as to create a more sustainable environment for future generations. President Xi Jinping made the call while addressing the opening ceremony of the 2019 Beijing International Horticultural Exhibition on Sunday. As the second largest economy in the world, China’s initiative to embark on a slower but more sustainable development path sends a blessing to Planet Earth and humanity. Greater understanding and concerted efforts from other countries are needed so that such an endeavor can generate beneficial effects for all.

The philosophy of keeping human behavior in accordance with the alternating cycles of nature has long been popular in China. Naturalism is central to Taoism, a belief system which dates back to the 4th century BCE. Taoism reached the height of its popularity in the Song Dynasty, one of the most prosperous periods in Chinese history, during which time, according to the estimates of renowned British economist Angus Maddison, China was the richest country in the world.

But that philosophy was for a while overshadowed by the idea that man’s determination could conquer nature as the country, a latecomer to industrialization, was keen to catch up with the West while trying to lift tens of millions of its people out of poverty.

After 40 years of rapid development, China has now become the second largest economy in the world with its poverty eradication target almost accomplished. But prices were paid as the environment was quite often sacrificed for the sake of the economy. Developed countries, such as Britain, the United States and Japan, have learned their environmental lessons during industrialization. China should learn from their mistakes so as to avoid being caught in the same ecological trap.

Realizing the importance of sustainable development, the country has been shifting its focus away from GDP-centered growth to a more structurally balanced pattern. In 2013, when delivering a speech at Nazarbayev University during his visit to Kazakhstan, President Xi Jinping made it clear that the environment shouldn’t be sacrificed for temporary economic development and that China has made building ecological civilization part of its national strategy. He also said that “Lucid waters and lush mountains are invaluable assets,” suggesting that environmental protection and economic development should not be contradictory to each other.

As the country ramps up its transformation process, the idea of green development is becoming increasingly popular. Cities which are not yet economically developed have been rejecting environmentally harmful projects unless stringent anti-pollution measures are guaranteed. More public transportation facilities are being built across the country to reduce energy consumption and harmful greenhouse gas emissions that damage the environment. Policies that promote the new energy economy are being introduced.

But the structural transition also comes with pains as the country’s economic growth unavoidably decelerates, which is sometimes taken as a bad omen by skeptics bad-mouthing the Chinese economy.

Despite such pressure, China is sticking to its green development plan. The country is committed to further carbon reduction even though it had already reached its 2020 emission targets by the end of 2017, three years ahead of schedule. Jake Schmidt, managing director of the New York-based international environmental advocacy group NRDC, has said China's climate commitment, and actions already underway to cap coal consumption and continue to expand clean energy “will bring enormous health, environmental and economic benefits to the people of China, and help the world stem the worst impacts of climate change.” That is also why, at the just concluded Belt and Road Forum for International Cooperation in Beijing, President Xi pledged that green principles should be applied to the Belt and Road Initiative and “green and sustainable development, backed by green financing instruments must become the new norm.”

As the Chinese president pointed out in his opening address to the 2019 Beijing Horticultural Exhibition, “The development path of making thorough but unwise exploitations has come to an end, and only the green development path which abides by the rules of nature and protects the environment can lead us to a bright future.” But a single tree cannot make a forest. Such a journey needs concerted efforts from all countries on Earth.

“No country can work them out alone. Only through cooperation can we effectively cope with climate change, ocean pollution, species protection and other global environmental problems, and reach the goal of the UN 2030 agenda for sustainable development,” noted the president.

Not so long ago, a study by NASA revealed that the world is literally a greener place than it was 20 years ago, largely helped by China and India. The world’s two largest developing countries have accounted for one third of the greening of the planet over the last two decades. “How the greening trend may change in the future depends on numerous factors, both on a global scale and at a local human level,” it pointed out.