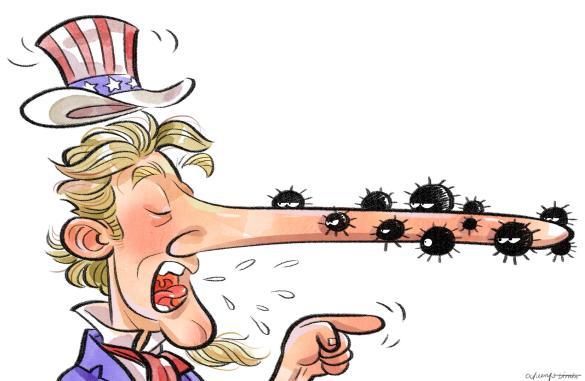 There has been increasing international opposition recently to the United States' attempts to politicize efforts to trace the origin of the novel coronavirus, since it does not serve the rest of the world's interests for the US to scapegoat China with the rumor the virus escaped from a virology lab in Wuhan. It would be more rational for the US to work together with China on vaccine research and pandemic prevention and control. Although it is important to know where the virus is from and how it has jumped to humans to prevent a similar pandemic in the future, it will likely take a long time and the priority now is to save lives.

Statistics of Johns Hopkins University show that infections of the virus have reached more than 200 million worldwide, among which 4.25 million people have died of COVID-19. It has taken only half a year for the number of infections to rocket from 100 million to 200 million thanks to the appearance of the more infectious Delta variant, which has spread to over 130 countries in different regions since it first appeared in India in September.

It should be seen that the COVID-19 vaccines remain the most effective tool to deal with the Delta variant. But the unfair distribution of the vaccines has seriously weakened the ability of the less-developed countries to address the challenge of the pandemic. The US and China, as the top two COVID-19 vaccine producers, have no reasons to ignore the reality that no country will be safe until the virus is tamed everywhere.

In this sense, the US should heed the call of the World Health Organization for international solidarity, and discard its relentless efforts to politicize the origin-tracing probe. If the US can stop its blame game and join hands with China, it will be much easier to fill the inoculation gap between the developed and the less-developed countries, so helping to tame the pandemic at an early date. Also, that can help repair their damaged mutual trust, and prevent their relations from souring further.