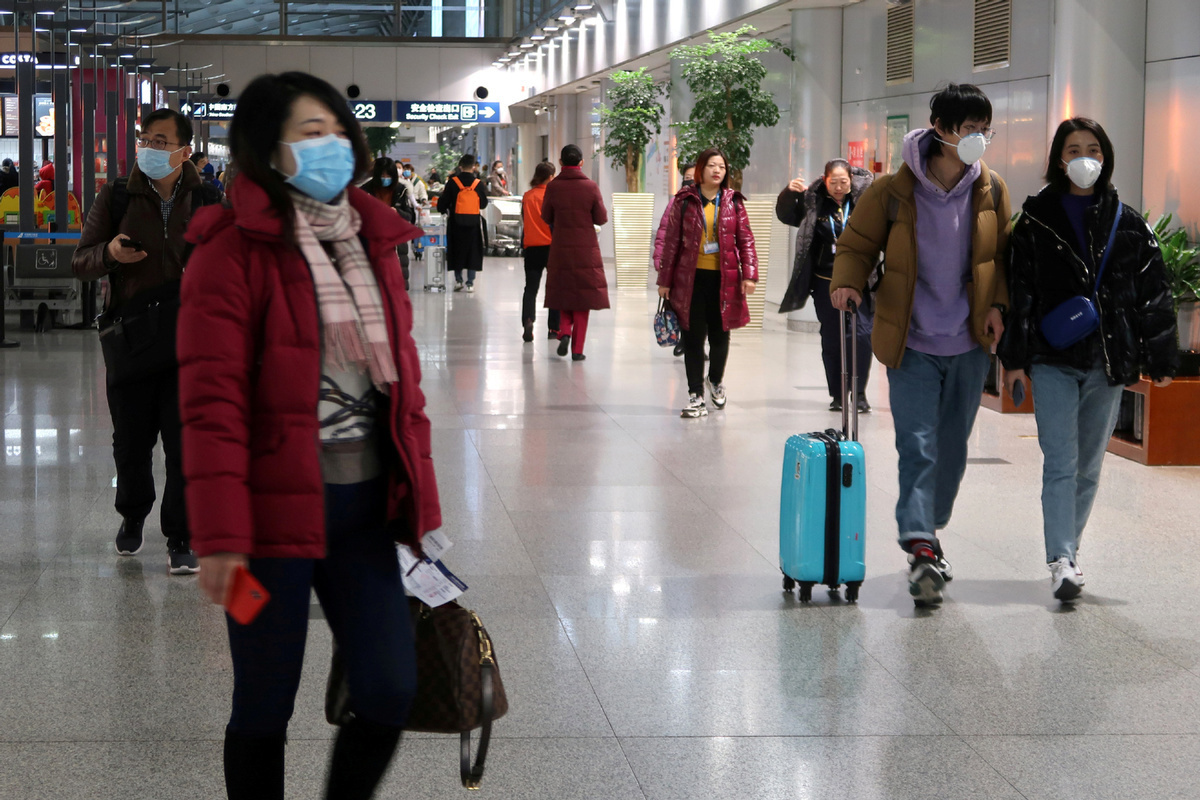 Passengers wearing masks are seen at the terminal hall of the Beijing Capital International Airport, in Beijing, Jan 23, 2020. [Photo/Agencies]

Editor's Note: With the novel coronavirus outbreak almost contained in the country but spreading rapidly overseas, China has made prevention and control of imported cases a priority. As such, many cities require all people coming from abroad to be centrally quarantined for 14 days at their own cost. Three experts share their views on the effectiveness of the prevention and control measure with China Daily's Liu Jianna. Excerpts follow:

Despite the sudden jump in imported infections in the past few days, the number of inbound trips has been 120,000 on average a day since the World Health Organization declared the novel coronavirus outbreak a pandemic on March 11, which is an 80 percent drop year-on-year, according to the National Immigration Administration.

That a number of Chinese living abroad are returning to China regardless of the huge economic cost and difficulties involved reflects the effectiveness of the prevention and control measures. Compared with its foreign counterparts, the Chinese government's resolute and comprehensive response have met the expectations of the Chinese people.

Therefore, the returnees' choice should be respected provided they fulfill the prevention and control requirements of both China and their host country.

The wrongdoings of a few returnees who hid their symptoms at airports and thus forced their close contacts into quarantine, too, should not prompt the government to close the door to its own people. Albeit the stricter border health and quarantine regulations that criminalize those acts are expected to help prevent such cases.

As for the returnees paying their own quarantine cost, it is an understandable trade-off between individuals' interests and public good.

The rise of populism in the West in the wake of the pandemic, especially the discrimination against Chinese, even other Asians, and US politicians' attempt to discredit China for its anti-epidemic measures reveal deep-rooted social prejudices. One of the reasons for it could be that locals, especially blue-collar workers, feel threatened by newcomers.

But such issues can be resolved by systemic reform, effective allocation of labor and introduction of advanced technology. Also, the fact that China's approach, which has always been aimed at joint and peaceful development and common good, has proved effective in the fight against the pandemic shows it can be used as reference by other countries.

Relatively speaking, China enjoys a unique advantage in dealing with large-scale public health emergencies: the centralized system enables it to mobilize necessary resources to meet big challenges, and traditional Chinese medicines can be used to treat many chronic diseases. In fact, TCM has proved effective in the treatment of novel coronavirus pneumonia.

Yet there is a need to reflect on the drawbacks in national and local governance, which were exposed in the early stage of the outbreak－for instance, certain officials' ingrained idea that stability should override all other factors.

True, the return of a relatively high number of overseas Chinese, especially those who have concealed their health conditions on purpose, has evoked rage online. But the number of such insincere individuals is low, and we should not take a part for the whole. And since such behavior has more to do with individuals' morals and respect for the law, they should be dealt with according to the law, instead of being targeted for attacks.

Besides, the government could consider exempting returnees in dire financial conditions from the mandatory quarantine, because they need to bear all their expenses during the 14-day quarantine, and instead they could be put in strict self-quarantine and their health condition monitored.

To reduce the risk of imported infections, the focus should not be only on airports and other entry points, and quarantine sites, but also on the communities and houses where the returnees live since some of the infected returnees may not show any symptoms and have an extremely long incubation period.

The outbreak once again reminds us about the importance of social psychology construction, which has been proposed at multiple top-level meetings. A lot of fury and criticism are directed at easy targets while objective and insightful debate and analysis are rarely seen. Which means a long road lies ahead in socio-psychological intervention and adjustment to build a mature civil society.

That China has almost contained the epidemic at home in less than two months and countries including the United States, the United Kingdom, France and Italy seem to draw lessons from China's anti-virus fight shows the effectiveness of its prevention and control measures.

Since China is free from the infighting between parties and political leaders' personal calculations, it can put its people's lives and health above all and fully focus on resolving the issue on hand.

Still, no system is perfect. Despite its unrivaled capability to devise, organize and implement targeted policies, and the smooth cooperation between the authorities and the people, the government could have done better by informing the public of the outbreak at the outset, thereby allowing more space for debates among the people.

The pandemic is expected to bring about profound changes across the world. To begin with, global economic regression appears imminent. The fact that the US stock market halted trading four times in 10 days and multiple Chinese economic indicators have slumped suggest dark clouds are gathering over the global economy.

Also, people's basic living and consumption patterns will undergo big changes, especially as a growing number of countries have already ordered lockdowns of cities and towns. And the US' politicization of the pandemic by promoting nationalism, even racism, and inciting hatred will certainly add to the volatility of the global situation.

The pandemic not only poses an unprecedented challenge to public health and people's dignity, but will also unleash a brutal competition among countries to protect their own interests. Which shows the necessity of building a community with a shared future for mankind, especially because when it comes to public health, security and economic stability, human beings indeed are in the same boat.

Liu Dongchao, a professor at the Department of Literature and History, Party School of Communist Party of China Central Committee