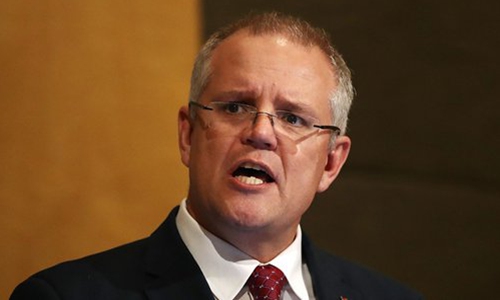 Kevin Rudd, Australia's former Prime Minister recently dubbed Donald Trump as the "most destructive president in history." Rudd was right in pointing out that Trump had been "maximizing the politics of division" when the American society is desperate to grapple out of the present quagmire of the intensifying racial tension and the exacerbating public health crisis.

As the head of a world-renowned think tank, the Asia Society Policy Institute based in New York, Rudd has been making dynamic and astute observations on the dramatic events that have been unfolding in the US. Since the COVID-19 pandemic had started its rampage in the US, he has been scathingly slamming the incompetence and toxic leadership of the White House. He has relentlessly criticized a series of the Trump administration's injudicious and fallible policies, including the decision to withdraw from the World Health Organization (WHO), the conspiracy theory to frame and incriminate China regarding the origin and spread of the novel coronavirus, and the White House's utter lack of competence and sense of direction to rein in the spread and deterioration of the virus in the US.

As America has been frenziedly tumbling into a national chaotic disorder since the start of the mass protests triggered by the "cold-blooded" murder of George Floyd by the Minnesotan police, Rudd is perspicaciously aware that the eruption of civil disobedience nationwide has, in fact, stemmed from "a highly destabilizing set of developments in America."

Indeed, the systemic deficiencies of governance in the US are holistic and intrinsic. As the strongest economy in the world with the best science and technology capacity, it is shockingly unable to come to grips with the epidemic that continues to tragically ravage the country. The current dire situation in the US is a clear indication of a failing system at both the federal and state levels.

The Minneapolis police brutality is not an isolated incident, but as Rudd commented, it has its background of "the history of American slavery" and the accustomed "tactics adopted by various police forces around the United States towards African-Americans." Rudd's commentary shares the same insights as the former US presidents Bill Clinton, George W Bush, Barrack Obama, and Jimmy Carter, who have lately condemned the racial injustice and divisive political tactic of Trump's administration.

What has posed as a sharp contrast is Australia's current Prime Minister, Scott Morrison, who has been unstintingly pandering to Trump's oftentimes irrational tactics. Morrison's recent series of diplomatic acts have reflected his keenness to collude with the White House's fanatic anti-China policies as America's dutiful deputy sheriff in the Asia Pacific region.

Trump called Morrison a "man of titanium", and Morrison reciprocated by claiming that this "unconventional" US president is good for Australia. After Morrison spearheaded a smear campaign against China in April concerning the origin of the novel coronavirus, even attempting to rally international support to his initiative by lobbying other world leaders such as Emmanuel Macron and Angela Merkel, who in fact unhesitatingly rejected his reckless proposal, he won resounding applause from US Secretary of State, Mike Pompeo and Trump himself. He was invited by Trump to attend the upcoming G7 meeting, which obviously serves both as a reward and a prod for further action to challenge China. During a recent call from the White House, Trump and Morrison discussed issues of "mutual concern", such as Hong Kong, which is obviously a barefaced interference with China's domestic affairs.

As an international political veteran, Kevin Rudd argued that in the global combat against COVID-19, "we must set aside crude nationalism." He criticized Scott Morrison of hypocrisy and pointed out that Morrison's ploys, such as attacking the WHO, serve "a far-right domestic political agenda," and follow a "Trumpian playbook".

Australia claims to adhere to independence and sovereignty in its foreign policy, but pathetically the Morrison administration, more often than not, has to fall into the synchronizing step that Washington dictates. From time to time Canberra cites the security issue as the raison d'être for blindly obeying Washington's strategy. However, when the Trump administration is threatening to resort to the armed forces to quell riots across the country when it proves to be a failed leadership to protect its own citizens from the COVID-19 pandemic, is Morrison really so confident that the Trump administration could provide security assurance to Australia?