The leisurely and peaceful rural life in videos of Li Ziqi, a Chinese vlogger with 7.45 million YouTube followers, can help city dwellers forget their anxieties. Her works and life draw great attention at home and abroad. Li has also become a cultural trend. However, could her videos be counted as cultural export? 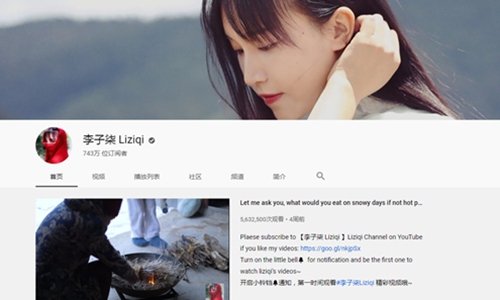 Based on statistics, she does promote Chinese culture abroad. Her videos on YouTube get likes and views as much as CNN. From her videos, people of different cultural backgrounds and races get to know about Chinese villages. What she delivers to the world is an awareness of Chinese culture rather than purposeful indoctrination. The cultural labels tagged to Li can be better understood through her videos.

Li's videos include traditional clothing stitched by her, cooking with home-grown ingredients, bungalows surrounded by streams and hills, and rugged paths without much traffic. These are the most basic living conditions for survival.

The development of technology has brought bucolic life into focus. The time people do not need to create raw materials is also the time people lose their happiness and fulfilment that come from hard work and harvest. Many people seem a bit lost and helpless in the storm of technology and globalization, which is the reason why Li's work catches people's attention. Her traditional Chinese life can take people back in time when cities were few and life moved at its own pace amid meadows and sheep. Instead of exporting Chinese culture, what she does actually is awakening the Shoshin, a word from Zen Buddhism meaning "beginner's mind," that has been long lost by people.

Moreover, regardless of background, everybody can identify with the humanity apparent in the videos - kind people, wonderful sights, natural vegetation and the sun-dried food. Viewers can feel the beauty of nature and the harmony among neighbors. This is the life that quite a few people seek in the current era. They cannot appreciate the fragrance of nature, the old stories that grandmas told, and the laughter echoing from mountain slopes. Many people walk so fast in their life that they forget the essence of life.

What Li does not only spreads Chinese culture to the world but also brings back the essence of China's history from thousands of years and puts it under the spotlight.

In her videos, life's philosophy is often hidden in finer details. Time seems to stand still so that Li can spend several months or even longer to brew a bottle of wine, make herself an outfit and prepare to cook a dish. But for many people, time is only something traded for money, passing by without even getting noticed. She can be herself and enjoy her life.

All things shown in her videos come from nature and are pure. In her world, human life and nature are synchronized. Li unconsciously tells people that beauty is everywhere, beauty is within reach. People living in modern society have been blinded by twisted values and endless emptiness. The messages from Li's videos are more like a beacon to guide people back to the basics, no matter where they have come from.

Can Li represent cultural export? It is meaningless to conceptualize her. Technologies and globalization have made what people pursue almost the same, regardless of where they come from. Yet Li uses the footage to remind people of this Shoshin - a plain and simple life. She tries to tell people - please do not go further and further away from the essence of life.