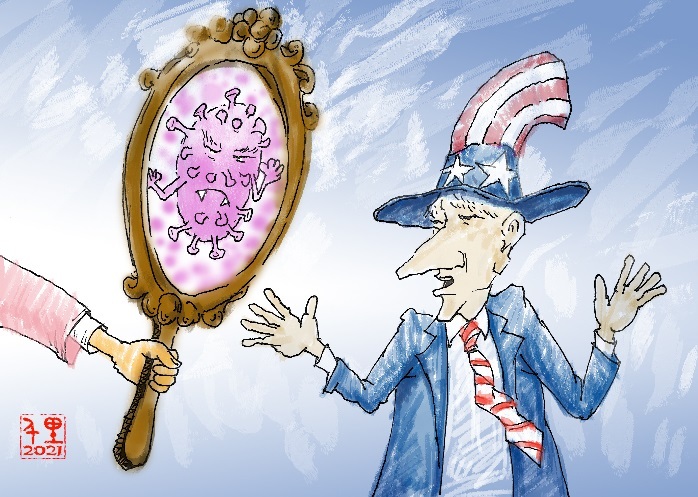 From genetic signatures to personal testimonies, evidence is growing to support the theory that the COVID-19 virus emerged from nature, while the lab leak hypothesis remains unsubstantiated, according to studies and scientists.

Last week, 21 scientists from universities and research institutes around the world published a critical review on the possible origins of SARS-CoV-2 on the preprint server Zenodo. The paper, which is still awaiting peer review, examined existing scientific literature on the two hypotheses.

Citing the history of emerging diseases, epidemiological data and genomic information, it concluded that a substantial body of scientific evidence points to a zoonotic origin of the virus, while there is currently no credible evidence of a lab leak. The Wuhan Institute of Virology in Hubei province has been put forward by some scientists and Western governments as a possible source of the coronavirus.

"There is no evidence that any early cases had any connection to the Wuhan Institute of Virology, nor evidence that the WIV possessed or worked on a progenitor of SARS-CoV-2 prior to the pandemic," the study said. It added that the lab leak hypothesis stems from the coincidence that the virus was first detected in Wuhan, where a major laboratory that studies coronaviruses is situated.

The issue with the lab leak hypothesis is that it is nearly impossible to verify or disprove. As it cannot be dismissed conclusively, room is left for doubt and speculation, the study said. However, focusing on an improbable lab leak scenario distracts scientists from more serious and urgent research. "Failure to comprehensively investigate the zoonotic origin through collaborative and carefully coordinated studies would leave the world vulnerable to future pandemics," the study said.

On July 5, a study by Chinese scientists posted on the preprint server bioRxiv examined the mutation spectrum of SARS-CoV-2 and found that it is 99.9 percent identical to that of RaTG13, the closest relative to the COVID-19 virus detected so far. RaTG13 is found in horseshoe bats.

Moreover, SARS-CoV-2's mutation spectrum is 99.3 percent identical to that of RshSTT182, another close relative of the COVID-19 virus found in a different species of horseshoe bats in Southeast Asia.

These findings indicate that SARS-CoV-2 evolved in a host environment－highly similar, if not identical to RaTG13 and other bat coronaviruses－that is difficult to duplicate in an arbitrary cell culture condition in a lab, the study said.

By and large, the international scientific community leans toward the idea that the COVID-19 virus jumped from animals to humans, probably via an unidentified intermediate host.

However, the lab leak hypothesis has been revived as foreign politicians and media claim staff members at the Wuhan institute had flu-like symptoms and were possibly infected with COVID-19 in November 2019. The claims were based on an unverifiable intelligence report.

In June, Australian virologist Danielle Anderson, the only foreign scientist working at the Wuhan lab before the outbreak, told Bloomberg that no one she knew at the lab was ill at the end of 2019.

The institute had implemented a procedure for reporting symptoms related to pathogens handled at the lab. "I was tested for coronavirus in Singapore before I was vaccinated and had never had it," Anderson said.

She added that many of her Wuhan colleagues went to Singapore at the end of December 2019 for a meeting on the Nipah virus and there was no talk of any illness sweeping the institute.

Tong Yigang, president of the College of Life Science and Technology at the Beijing University of Chemical Technology, said in a news briefing in March that the rumor of three institute staff members falling ill was the result of another incident being misreported. They were actually COVID-19 positive test samples from a hospital that were submitted to the lab for research, he said.

Tong, who was a member of the WHO's mission to China to investigate the origin of COVID-19, said the team investigated the rumor and found no institute employees had been sick.

In 2019, the institute and a Wuhan hospital collaborated on monitoring flu outbreaks. From January 2019 to January 2020, scientists collected 1,001 samples and submitted them to the lab for research in March 2020. They discovered that four samples collected in January 2020 tested positive for the flu and COVID-19. "They were patients from the hospital, not WIV staff (members)," Tong said.

Last week, two dozen scientists published an open letter in The Lancet medical journal stating that SARS-CoV-2 most likely originated in nature and not in a lab, based on genetic analysis of the new virus and well-established evidence from other diseases related to coronaviruses.

"Science, not speculation, is essential to determine how SARS-CoV-2 reached humans," the scientists said. "It is time to turn down the heat of the rhetoric and turn up the light of scientific inquiry."

David Relman, a professor of microbiology and immunology at Stanford University in the United States, said during an online seminar last week that one of the reasons why the natural spillover and lab leak hypotheses are both being considered is because the "immediate ancestors" and "intermediate host" for the virus are still unknown.

He added that more research should be done to anticipate the next pandemic and create a more effective response.

Relman said it is troubling that investigating the origin of the virus has become deeply politicized. It has gotten to a point where it is "unwise and unhelpful" to share an opinion on the origin as many people have strong views on which scenario is more likely, he said.

A Beijing-based microbiologist, who requested anonymity, said the discussion on the origin of the virus had turned "chaotic and toxic" due to the scant data, a lack of trust in existing scientific inquiries and some foreign politicians pinning the blame on China for political reasons.

"Scientists have been debating a spectrum of origin hypotheses since the outbreak began, and the lab-associated origin wasn't new or compelling," the expert said.

"In frontier sciences, ideas get thrown around and get overturned all the time－it is a messy and error-prone process. But, a good quality of rational scientists is that they are willing to self-correct and change their minds when new valid evidence is presented."

The microbiologist added, "Politicians and media throwing whatever new findings and opinions out there, will only make the public discourse on the origin of the virus more confusing and frustrating."