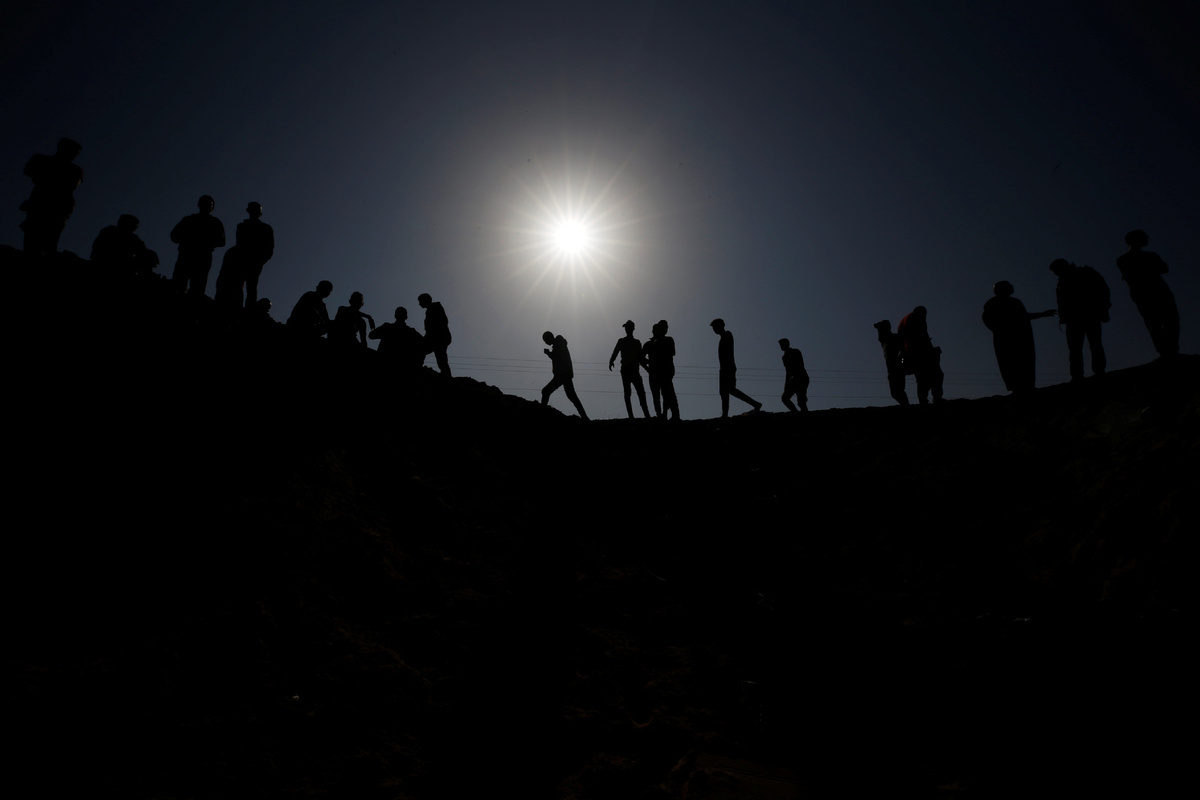 Palestinians gather at the scene of an Israeli air strike in the central Gaza Strip Nov 14, 2019. (Photo: Agencies)

To exploring new ideas for security governance in the Middle East is of vital practical significance in today’s world. It calls on each party to jointly discuss solutions to hotspot issues, negotiate on security cooperation plans, and seek for strategies of stable development.

Security in the Middle East under the New Situation: Challenges and Prospects, which was the theme of the Middle East Security Forum (MESF) recently held in Beijing, poses an important question that the world needs to contemplate on under the increasingly complicated security situation in the region.

The constantly emerging hotspot issues in the Middle East have trapped multiple countries in chaos. The development of endogenous contradictions in the region, such as geographical, ethnical, sectarian, and national governance takes partial responsibility for the predicament. However, external forces cannot escape the blame for their irresponsible wrongdoing in the region, either.

The Palestine-Israel issue has been deviating from the "two-state solution" with sharper contradictions and disputes. As a country that has an important influence on the Middle East, the US has injected huge instabilities into the complicated situation of the region with its selfish and unilateral Middle East policies.

The country even said publicly that the US administration does not consider Israeli settlements in the West Bank a violation of international law, which has triggered protests of the Palestinians and strong dissatisfaction of Arabic countries.

Former Prime Minister of Iraq Ayad Allawi noted at the MESF that the biased stance taken by the US has contained the Palestine-Israel peace process, calling it a root cause for regional security tensions.

In the name of "peace", the US is making private profits during the Middle East peace process and pushing the region toward tension and conflicts, said United Arab Emirates (UAE) newspaper Al Khaleej.

Besides, Palestinian media called on the international society to uphold justice, with a premise to respect and guarantee the interests of the people in the region.

Under the new security situation in the Middle East, each party is working to find new mechanisms to promote peace. However, it's undisputed that any mechanism with such purpose should not deviate from the principle of equity and justice.

Chinese President Xi Jinping said in a recent congratulatory message to the United Nation (UN) -organized the Observance of the "International Day of Solidarity with the Palestinian People" that "The international community should safeguard fairness and justice, and uphold relevant UN resolutions as well as the land-for-peace principle and the two-state solution, so as to create an atmosphere conducive to the resumption of Palestine-Israel peace talks." Such firm support for the Palestine-Israel peace represents international justice.

China supports to bring the Iranian nuclear issue back to the track of the Joint Comprehensive Plan of Action (JCPOA) without delay, and opposes the act of reversing the course of history through exerting unilateral extreme pressure. It showcases the sense of responsibility of a major country.

Chinese solutions have earned trust and been welcomed by each party for the adherence to justice, emphasis on long-term development and focus on addressing both the symptoms and root causes.

China rejects the idea of absolute security at the cost of others and the zero-sum or self-supremacist mentality. Instead, it holds that the world must together pursue common, comprehensive, cooperative and sustainable security.

China seeks to guarantee the security of all countries – not only military security, but also political and social stability. Besides, the country proposes to realize security through political dialogues and multilateral cooperation, and emphasizes development during security process in which development serves as support for security and enhances the sustainability of security.

China is never partial to any party, or seeks the so-called absolute security of its own at the cost of the security of other countries. It is a constant attitude of the country, one that will never follow the beaten path to seek hegemony as it gets stronger.

Jawad Anani, former deputy prime minister of Jordan believes that China is able to play an important role in solving the security issues of the Middle East and pushing for permanent peace of the region.

To make contribution to global peace and development is a due responsibility of all members of the international community. China has always firmly supported the positive efforts made by countries and people in the Middle East to safeguard equity and justice, and protect regional peace and stability.

The country has worked actively to promote peace through talks, making constructive proposals on multiple hotspot regional issues, such as the Syria issue, Palestine-Israel conflict and Libya issue.

During this year’s UN General Assembly, China put forward three proposals on the situation in the Middle East and the Gulf region for which it received sincere welcome from relevant parties.

China has sent over 1,800 UN peacekeepers to the Middle East, and a total of 5 Special Envoys of the Chinese Government on the Middle East Issue have been working for the security of the region since the first appointment was declared in 2002.

UAE newspaper Al-Ittihad commented that China attaches high importance on the peace, security and stability of the Middle East, and works to enhance dialogues and consultation among each party under the premise of not interfering in their domestic affairs, and makes efforts to resolve disputes through peaceful manners and improve the livelihood of the people there.

World peace won’t come until the Middle East is secure. To lift people in the Middle East out of wars and miseries will bring welfare to the world. Each party should make joint efforts to establish constructive platforms to offer new ideas and explore new methods in the governance of the region.

Facts have proved again and again that only by supporting multilateralism, opposing unilateral acts, building consensus, taking care of each other’s concerns and promoting inclusiveness can wrong approaches be stopped, crisis be resolved and stable and long-term development be achieved.