The death of Jiang Ge, a 24-year-old Chinese postgraduate stabbed by the ex-boyfriend of her roommate Liu Xin last year in Japan, has again triggered an uproar in China after a Chinese media outlet organized a meeting between Liu and the victim's mother. While a public petition called for death penalty to the suspect ahead of his trial next month, Liu - who reportedly kept the door shut disregarding Jiang's cries for help during the tragedy, ignored Jiang's mother's plea for evidence and flaunted her cushy life on social media - is in the glare. Is Liu the right target at the moment? The Global Times has collected three views on the issue. 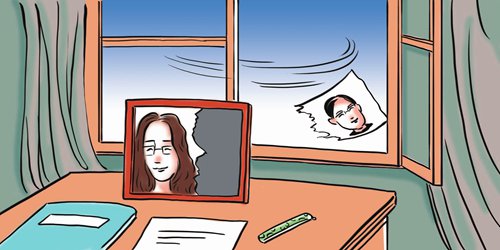 Internet sets bottom line for humanity The scathing online denunciation of Liu for her refusal to save her friend and severing ties with the victim's mother has tainted the girl's reputation and will affect her future. It is not known what Liu is like, but what she did during the incident is indeed immoral and has harmed Jiang's mother a second time. Liu should be grateful to Jiang, and netizens believe that she has broken the bottom line of not repaying good with evil.Apparently, Liu didn't violate the law and shouldn't be held responsible for Jiang's death. But is she morally unpardonable for breaking connections with and verbally attacking Jiang's mother? In fact, moral standards in today's Chinese society are far from perfect. Immoral behaviors are not something new in this country that is in transformation. The punishment given to a person should not be heavier than what the law imposes on criminals, as long as one hasn't broken the law. However, the Internet has turned the whole country into a "community," which abhors evil, draws a clear line between what to love or hate, and is sometimes idealistic. Liu seems to have met all conditions to be labeled "a model of evil." She reportedly refused to safeguard the reputation of Jiang who died for her. As a result, she was denounced by the public. This is perhaps the first collective condemnation on the Chinese Internet of a girl who did not break the law but was morally culpable.The Internet warns that morality cannot be violated. While the law regulates people's behavior, morality sets the bottom line. Although a person may escape punishment from the law, it is no escaping society's ethical standards set on the Internet. There is no Internet standard to measure the price that Liu should pay for what she did. Making an example to deter others is the online norm. Be it "Internet violence" or "calls for justice," the overwhelming condemnation of Liu reflects the true face of today's Internet. Some argue that those criticizing Liu should also respect the law. This is encouraging. After all, living in an Internet age should make us respect its rules, be law-abiding and show more respect to moral standards.

Global TimesLaw should bring justice to the deadWhat really happened on that miserable night? Jiang's roommate Liu disassociated herself from it and refused to meet with Jiang's mother at first, leaving us in doubt about her behavior and respect for humanity. The available facts make us believe that Liu did nothing to save Jiang from being murdered. She acted ruthlessly for not rescuing Jiang and refusing to meet with Jiang's mother. After all, Jiang was her friend and her mother was desperate to know the truth with a bruised heart.Recently, a Chinese online program released a video showing Jiang's mother finally meeting with Liu. During the two hours' meeting, Jiang's mother accused Liu, saying she would not forgive her, while Liu cried and explained and almost collapsed under public pressure. The meeting was like an interrogation of humanity under the pressure of public opinion. In reality, the condemnation of social morality may upset some people, but such punishment should not be the end.Criminal Law of the People's Republic of China stipulates personal jurisdiction, territorial jurisdiction and protective jurisdiction. While the murder suspect, also Liu's ex-boyfriend, captured by Japanese police will be tried in Japan in accordance with the country's laws, Liu should also be punished as well if she is found guilty of doing nothing to save her friend from being killed, as investigation is underway.According to the Criminal Law, based on the relationship between Jiang and Liu, one has responsibility to save the other. If one side did nothing, not even call the police, it would be seen as a deliberate act of indirectly leaving the other to die. This can lead to a prison sentence of three to 10 years. According to the Penal Code of Japan, doing nothing to save someone from being killed can invite a prison sentence between three months and five years. And if it is confirmed that Jiang helped her friend for a just cause, she deserves a certain amount of compensation. Morality is not everything. To face darkness inside humanity, judgment by law can leave the dead in peace and make the one alive stronger.cctv.comNo moral judgment before case concludesAccording to General Provisions of the Civil Law of the People's Republic of China, the personal casualty and property loss that the Samaritans suffered should be compensated properly by beneficiaries based on fair principles. If Jiang is confirmed a Samaritan, she should be compensated by the beneficiary.Jiang's mother has been hurt to the core and her pain cannot be expressed. However, some people rush to blame and curse Liu. Do they actually figure out whether all the details released by the media are true? Jiang was killed because of Liu, but Liu refused to meet Jiang's mother, is it the whole truth?In fact, opinions that Liu locked the door and Jiang died for Liu have not been definite conclusions by now. So most people have judged it based on unclear facts, and even guess work. In such circumstances, when we feel sorry for Jiang and her mother, shouldn't we be more careful in judging Liu? After all, she is the survivor of the murder and not an accomplice.The murder narrative may be easy to understand, but humanity is hard to fathom. For Liu's behavior and psyche, there cannot be totally correct answers. What did she do when the killing took place and why she was refusing to meet Jiang's mother? She may only know the truth. Some media outlets and people accuse Liu of being ruthless, but who really knows what she actually thinks? Accusing someone of having acted immorally is easy but also irresponsible.The suspect has been captured and awaits trial. To forgive the suspect or not is up to Jiang's mother. As for Liu's family, we do not have the right to force an apology. Actually, we should realize that we can do nothing about it. What's more, we should not pass a moral judgment to sow hatred between the two families.In fact, Jiang's mother's dispute with Liu is the result of the murder. Actually the biggest justice is to let the criminal be punished by law. If Jiang's mother thinks Liu is responsible for her daughter's death as well, she may need to seek legal recourse. Otherwise, it is not of much help to end hatred and soothe the injury by radical public opinion.