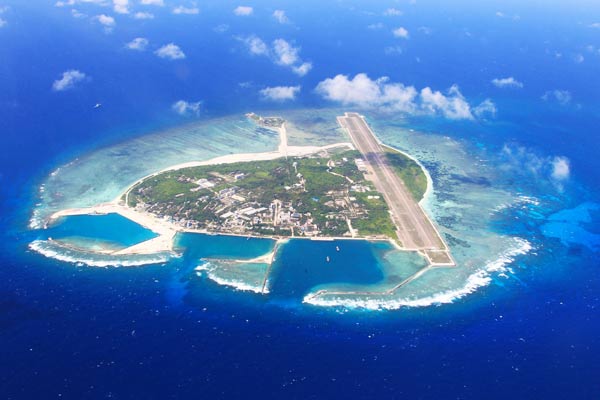 Since the second half of 2016, the situation in the South China Sea has been changing for the better, moving from confrontation to cooperation. In this process, China and ASEAN members are stepping up negotiation on the Code of Conduct in the South China Sea, and pushing forward discussions on practical cooperation, crisis management and confidence building, which actually began before 2016. This is a very positive development and will help maintain regional peace and stability.

China has always held that the COC negotiation should work parallely with the full and effective implementation of the DOC. The COC is not a substitute for the DOC but an updated version. The COC framework has made it clear that just like DOC, in essence, the COC, is not a tool for solving territorial disputes and maritime delimitation, but a mechanism for crisis management, confidence building and maritime cooperation.

In the past year, the COC negotiation has made some major progress. China and the Association of Southeast Asian Nations adopted the draft of the COC framework and started the formal negotiation phase. The aim of the COC is to reach an institutional arrangement acceptable to China as well as ASEAN members, and establish some rules governing the future behavior of the claimants.

So, in a certain sense, the COC will provide institutional guarantee for crisis management and maritime cooperation. And the COC negotiation process is a process of building regional maritime order based on consensus by China and ASEAN. (This order, of course, is different from the "rule-based order" advocated by some outside powers.) This will be very important for long-term peace and stability in the South China Sea.

Second, in the DOC implementation process and COC negotiation, China and ASEAN have already listed some CBMs, maritime cooperation areas, and preventive measures to be pursued. We should first try to put those measures into practice.

In fact, in the DOC signed by China and ASEAN back in 2002, the fifth article listed four kinds of CBMs: holding dialogues and exchange of views as appropriate between defense and military officials; ensuring just and humane treatment of all persons who are either in danger or in distress; notifying, on a voluntary basis, other parties concerned of any impending joint/combined military exercise; and exchanging, on a voluntary basis, relevant information. But these CBMs have never been effectively implemented.

More recently, China and ASEAN member states stepped up efforts to build confidence in the South China Sea. In April 2015, the statement of the chairman of the 26th ASEAN Summit said: "Pursuant to the full and effective implementation of the DOC in its entirety, and while the work towards the expeditious establishment of the COC are undertaken, we agreed that preventive measures should be undertaken to address developments in the South China Sea". The meeting also "took note of Indonesia's proposal to establish a hotline of communications at the high level in the government between ASEAN and China to address emergency situations on the ground that need immediate intervention" with the aim to immediately reduce tensions on the ground.

In October 2015, at the 10th China-ASEAN Senior Officials Meeting on the Implementation of the DOC in Chengdu, Sichuan province, China and ASEAN officials identified maritime cooperation as one of the three main areas to pursue in further implementing the DOC. Participants agreed to have greater cooperation on navigation safety, search and rescue, marine scientific research and environmental protection, as well as combating transnational crimes at sea.

Key developments in fields of cooperation

More important, in August 2016, at the 13th China-ASEAN Senior Officials Meeting on the Implementation of the DOC, as "early harvest", both sides adopted the "Guidelines for Hotline Communications among Senior Officials of the Ministry of Foreign Affairs of China and ASEAN Member States in Response to Maritime Emergencies and the Joint Statement on Application of Code for Unplanned Encounters at Sea in the South China Sea".

Besides the above achievements, the other important development in confidence building and crisis management in the South China Sea are worthy of attention. One is the Code for Unplanned Encounters at Sea adopted by ASEAN member states' navies at the Western Pacific Naval Symposium in Qingdao, Shandong province, in April 2014. The other is China-US memorandum of understanding on "Rules of Behavior for Safety of Air and Maritime Encounters" signed in November 2014.

All the above measures are very helpful for enhancing trust and confidence, and for managing risks by reducing the possibility of misunderstanding and misperception between the militaries. So we should first emphasize the full implementation of these documents, so as to avoid confrontation or crisis before the conclusion of the COC and also provide the basis for future discussion on CBMs.

Third, in the process of the COC negotiation, we should grab the opportunity of relative tranquility in the South China Sea to further enhance maritime practical cooperation, so that we can realize the dual objective of improving maritime cooperation mechanisms and building the regional maritime order.

Following the arbitration case, both China and ASEAN leaders now have stronger political will to push forward the COC negotiation. But because both sides still have some different views on the COC, it will be a hard and relatively long process. Under such circumstances, we should consider how to enhance maritime cooperation as a way to provide a favorable environment for the COC negotiation.

Enhancing pragmatic and functional cooperation can also be seen as one type of CBM, because it will help promote trust and confidence. In fact, due to the turnabout in the situation in the South China Sea, China and ASEAN member states have already begun to explore how to further bilateral or multilateral cooperation.

For example, China and the Philippines established a Joint Committee for Coast Guard Maritime Cooperation in 2017. Under this committee, both countries will deepen cooperation in areas such as combating cross-border crimes, maritime search and rescue, marine environmental protection and emergency response. China and the Philippines have also begun discussing the possibility of joint development of oil and gas resources, and the prospect of cooperation in fishing in the South China Sea. And China and Vietnam have enhanced Coast Guard cooperation.

But we can do more. China recently put forward the idea of building cooperation mechanisms among countries surrounding the South China Sea. Some scholars suggested that China and ASEAN members build a "Pan-South China Sea Economic Cooperation Circle", in order to enhance cooperation in maritime tourism, infrastructure building, and other maritime affairs. All these efforts and initiatives should be encouraged and given more support, because these are quite positive factors for maintaining regional maritime security.

Nevertheless, the COC negotiation, CBMs and maritime cooperation are still facing a number of challenges. Despite the many positive developments in the South China Sea, we should recognize that in the COC negotiation, China and ASEAN member states still have some major differences on the content of the COC, which may pose a challenge to the negotiation process.

Besides, the two sides have different views about the COC negotiation process. China thinks the negotiation process should be gradual, while ASEAN members want a quick conclusion. In addition, although cooperation could proceed even as the disagreements are negotiated at the political level and the sovereignty disputes remain unresolved, a lack of trust between China and ASEAN members as well as the unresolved sovereignty disputes between them will prevent cooperation from time to time. And any external intervention will make the negotiation more complicated.

In other words, we now have a very good opportunity for cooperation and build confidence in the South China Sea, but we also need to make more efforts to maintain long-term peace and stability in the region.

(The author is an associate research Fellow at War Studies College, Academy of Military Science.)