Narcissistic fascination blinds Americans from seeing reality of China, US 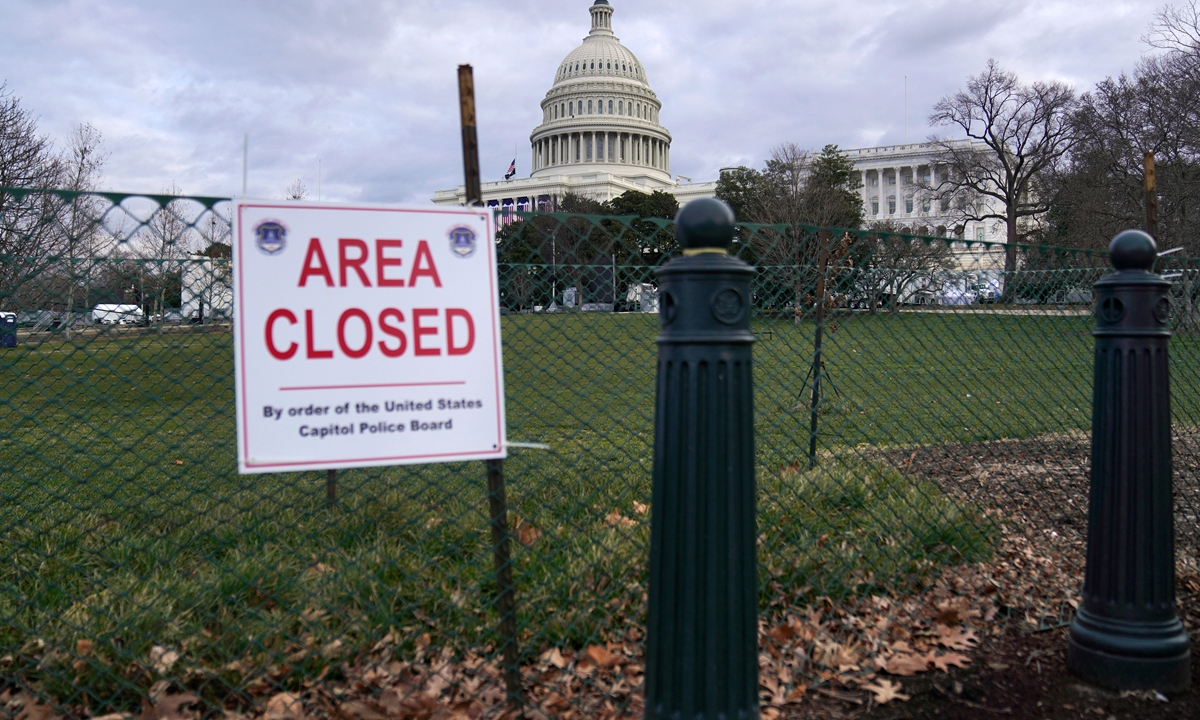 A sign reading "Area Closed" is posted on fencing outside the US Capitol on Sunday in Washington, DC. After riots at the Capitol Building, the FBI has warned of additional threats in the nation's capital and in all 50 states. (Photo: AFP)

The article is full of entangled contradictions, demonstrating the sentiment - sort of the discomfort and complaints of a narcissistic man who is no longer the focus of the spotlight. On the one hand, the article demeans China. And on the other, it tries to use China as a stick to stimulate the US.

Friedman wrote, "China can be really evil AND really focused on educating its people and building its infrastructure." Obviously, in his mind, China should forever be the country running after the US.

To help his argument, Friedman cited from HBO talk show Real Time with Bill Maher in his segment called, "New Rule: Losing to China," which aired on March 13. However, like Friedman, Maher didn't really mean to praise China's advantages.

"Actually, I am not interested in China. I care about America," Friedman wrote. Does he fear to be labeled being "pro-China" due to such an unfair article against China? If the current American society is too narrow-minded to admit to the basic facts of China or accept any words that "praise" China, shouldn't they think carefully how a superpower has come to this place?

China's system is not perfect. But if it really has so many crises as Friedman claimed, how could China have achieved such great progress?

If you only see the changes in others' attitudes, but fail to figure out the root causes behind the changes, you won't be able to address any of your problems.

The US' narcissistic fascination with its own system and values has blinded it to the landscape of the current global reality. This is the biggest problem facing the US.

Friedman wrote, "Be careful. Some of your diplomats sound awfully arrogant. As the proverb says: 'Pride goeth before destruction, and a haughty spirit before a fall.'" While Friedman was writing this message to China, isn't it honestly more applicable to the US?

If Chinese diplomats who defend their country against groundless accusations and slanders were arrogant, then what about US diplomats who regularly attack and defame others around the world?

Moreover, the US is accustomed to being the leading power in the world. Yet it has a lot of problems that are widely known. The last four years in particular have seen it make a fool out of itself with the political farces. The "beacon of democracy" has collapsed.

Friedman hopes that the Americans will "return to and double down on what was our formula for success." But the times have changes. So have Americans. A large number of them are now ignorant and arrogant. They are living in hot water. Still, at the same time they are trying to tell the rest of the world that they are their saviors. Americans truly believe this. These Americans have become hypocritical humanitarians. They do so to satisfy their own sense of moral superiority.

In American society, racism and political correctness prevail. The country now lacks the most basic ingredients of inclusiveness to achieve multiculturalism. Ironically, respecting multiculturalism is the shiny badge that the US has pinned on itself to brag to then world. This being the case, it is highly doubtful whether the US will manage to, as Friedman wrote, attract, "the world's most energetic and high-IQ immigrants to enrich our universities and start new businesses," especially now with the intolerable waves of racists attacks against Asians. Moreover, just look at the huge number of Chinese talents who have been ostracized, hated, and badly treated in the US.

The internal collapse of the American values it prides itself on, makes them very hard to sell with respect to the rest of the world.