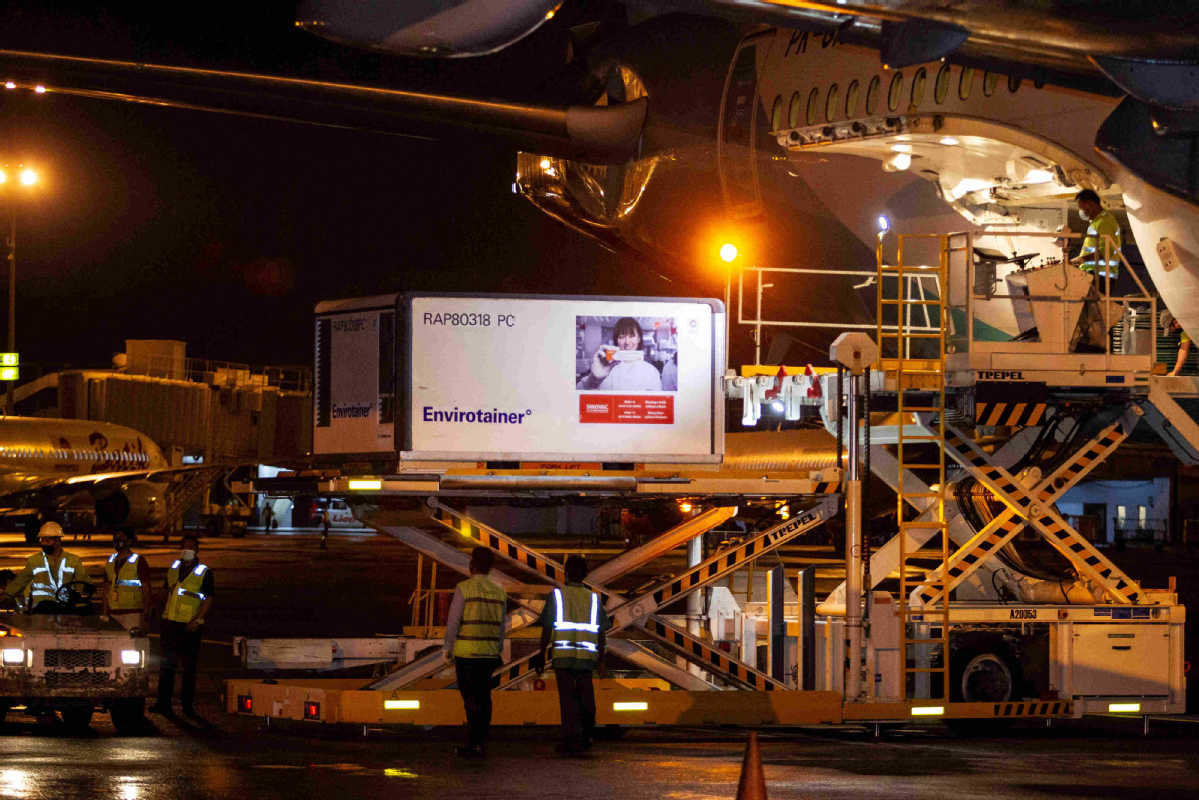 A shipment of vaccine produced by Sinovac Biotech arrives at Soekarno-Hatta International Airport in Jakarta, Indonesia, on Dec 6. (Photo: Reuters)

Editor's note: The pandemic has posed challenges to many aspects of social development and people's lives. In a series of reports titled "Fighting the Pandemic: 2020 in Review", we look at achievements made in different fields. This is the third part of the series.

The pandemic failed to slow China's diplomatic efforts during a challenging year.

Instead, the world's second-largest economy found new ways to ensure the success of its diplomacy.

Officials and experts said the nation quickly adapted its foreign policy to meet the changing situation, worked with its partners in different ways and proposed fresh initiatives to help keep global governance afloat and boost unity.

With global vision and a strong sense of responsibility as leader of a major country, President Xi Jinping engaged in intensive head-of-state diplomacy, including "cloud diplomacy", conducted through online platforms, and put forward fresh proposals by China to tackle global challenges.

Throughout the year, Xi had more than 80 phone calls with foreign leaders and heads of international organizations, and attended 22 important diplomatic events online.

"This helped build global consensus on COVID-19 and pointed the way forward for China's foreign policy," State Councilor and Foreign Minister Wang Yi told a seminar on diplomacy on Dec 11.

Describing this year as "a watershed in human history" and "a groundbreaking year for China's external relations", Wang said the country's diplomatic missions, under Xi's leadership, have fought the coronavirus and the "political virus" at the same time, and made new contributions to safeguarding national interests and global stability.

According to Vice-Foreign Minister Le Yucheng, since the start of the outbreak, China has provided assistance to more than 150 countries and sent 36 medical teams to 34 nations in need during Beijing's "largest global humanitarian campaign" since the founding of the People's Republic of China.

As the largest manufacturer of medical supplies, China has provided more than 200 billion face masks, 2 billion protective suits and 800 million testing kits to countries around the world.

Meanwhile, the 7-year-old Belt and Road Initiative, initiated by China, made new advances in the past year. As of last month, 138 countries had signed cooperative documents on jointly building the initiative.

On Nov 5, Foreign Ministry spokesman Wang Wenbin told reporters China and its BRI partners have jointly launched more than 2,000 projects generating tens of thousands of jobs, and the initiative has "become an international public good that is popular across the world, as well as the biggest platform for cooperation. "

Zhang Yuyan, director of the Institute of World Economics and Politics at the Chinese Academy of Social Sciences, warned that the pandemic is still spreading rapidly worldwide, with various risks accumulating and the threat of a major global economic recession rising.

"Faced with the complex and dire epidemic prevention and control situation in the world and the remarkable challenges to economic development, no country can survive this ordeal alone," Zhang said. 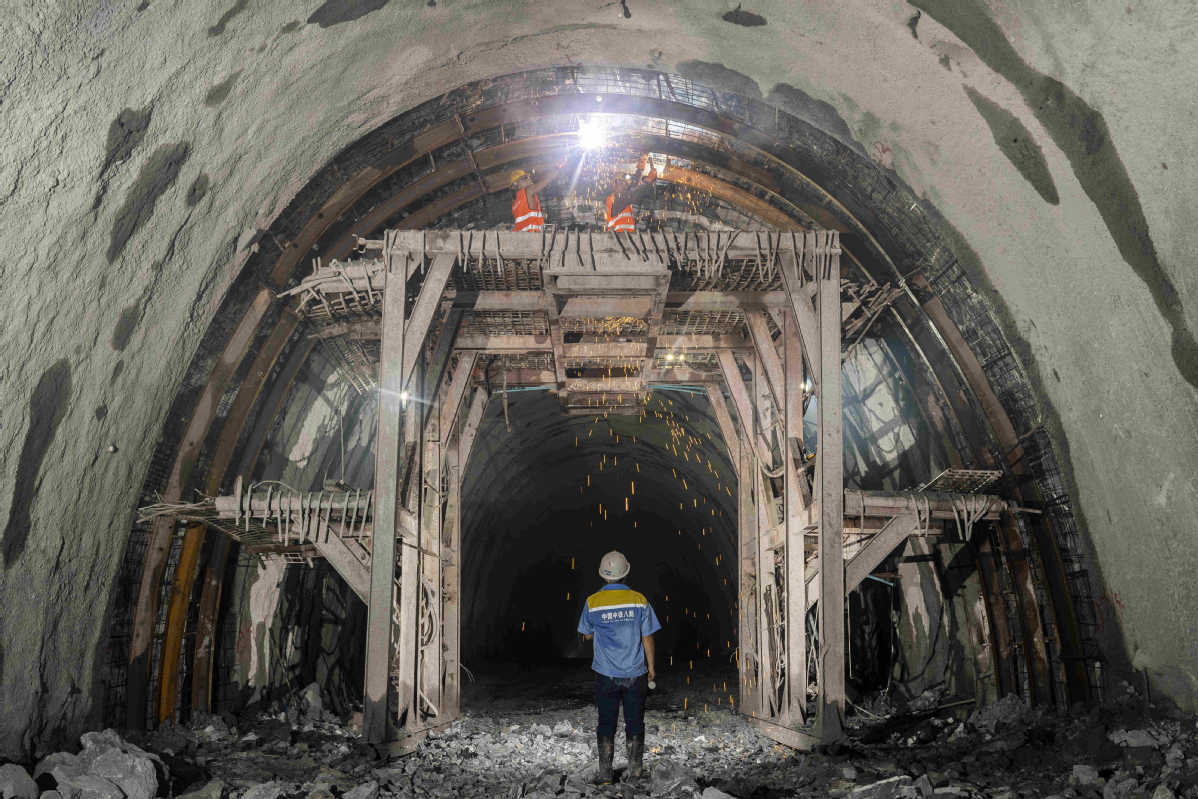 Chinese workers build a railway tunnel in Laos. The railway, part of the Belt and Road Initiative, links the Laotian capital Vientiane to Boten, a town on the border with China. (Photo: Xinhua)

The virus has significantly reshaped the world of diplomacy. Instead of face-to-face contact, China and its like-minded partners quickly shifted to other means of communication, such as videoconferencing.

Numerous high-level online meetings were held to avoid disrupting the work of organizations such as the G20, the BRICS nations (Brazil, Russia, India, China and South Africa) and the Shanghai Cooperation Organization.

Online events attended by President Xi underscored the wide spectrum of China's renewed diplomatic efforts. These events included the G20 Extraordinary Virtual Leaders' Summit on COVID-19 in March, while in May, he addressed the opening ceremony of the 73rd World Health Assembly.

He also hosted the Extraordinary China-Africa Summit on Solidarity against COVID-19 in June and addressed the opening ceremony of the virtual 2020 Asian Infrastructure Investment Bank Annual Meeting in July.

From September to last month, in what was widely hailed as a major push toward multilateralism, Xi attended via video links a series of high-level meetings with groupings such as the UN, the Shanghai Cooperation Organization, BRICS, the Asia-Pacific Economic Cooperation forum and the G20. He also attended and addressed the Climate Ambition Summit this month.

Fresh proposals were made by Xi at these events, including China's commitment to the COVAX global vaccine plan, building a community of health for all, debt reduction for underdeveloped countries, advancing reform of the global financial system, bolstering the digital economy and promoting the China-led global data security initiative.

Le, the vice-foreign minister, said that throughout this year China has shown the "great sense of duty" that a major country should bear. In this respect, it did not put itself first or benefit at the expense of others, while taking the lead in offering global public good and epitomizing the empowering of global governance.

Ruan Zongze, executive vice-president of the China Institute of International Studies, said the nation's adherence to the UN Charter and its support for multilateralism are "unswerving", despite tremendous changes in the international situation and unprecedented challenges and risks.

He said Xi's comments and proposals sent clear signals on China's role as a responsible country that champions multilateralism and international justice, helping win greater recognition and respect for the country and further enriching understanding of Xi Jinping Thought on Diplomacy.

This year also witnessed a surge in unilateralist moves, global trade protectionism and increased attacks aimed at China's growth on the global stage, dampening the prospects for diplomacy worldwide in the next 12 months.

On Dec 18, Wang Yi, the foreign minister, told the Asia Society, a think tank based in the United States, "In retrospect, 2020 might have witnessed the greatest damage to the international order and international relations … we see power politics jeopardizing international stability, as arbitrary interference in others' internal affairs and sanctions have become the biggest destabilizing factor to regional and global security."

Wang said China's diplomacy is aimed at the nation's development, a win-win outcome and equity.

He added that many experts and policy advisers have followed the nation's diplomacy closely and discussed its style and future direction.

Ruan, the CIIS scholar, said the arrival of the pandemic and the changing global situation have acted in tandem to accelerate an evolving international political environment.

"As several crises have multiplied the overall impact, most countries agree that only by staying in the same boat and helping each other can they weather the storm," Ruan said.

Zhang, the CASS scholar, said that in the near term, China's diplomacy should further properly study and tackle the current international situation, make good use of opportunities for peaceful development, and strive to break new ground with major countries.

"The world today still enjoys a high degree of interdependence. Although (economic) globalization has experienced strong impacts, connectivity and communication will continue to serve as the backbone of the global economy, and opening up will remain one of China's fundamental national policies," Zhang said.

Wang Fan, vice-president of China Foreign Affairs University, said the global situation is complicated and appears bleaker than ever. Peaceful development remains at the center of China's diplomacy, and the country is committed to creating and maintaining such an environment.

"But we face more difficulties and challenges, and we can anticipate more to come, especially in terms of security risks," Wang said.

"Therefore, elements of insecurity in the context of peace in general may accompany China's growth for a long time in the future and the country will face fresh tests regarding the issues of security and sustainable development," Wang said.