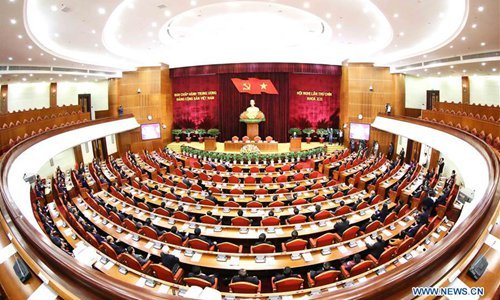 Photo taken on Dec. 26, 2018 shows the scene of the closing ceremony of the ninth plenary session of the 12th Communist Party of Vietnam Central Committee (CPVCC) in Hanoi, capital of Vietnam. (Photo: Xinhua)

The year 2020 marked the 90th founding anniversary of the Communist Party of Vietnam (CPV). Vietnam has realized major achievements in pandemic prevention and economic stabilization. It is recognized as a world role model for its pandemic control measures, and annual economic growth of 2.91 percent for 2020. As such, it is a bright spot of Asia's regional economic development. The "Vietnam model" has therefore been receiving frequent international media coverage.

The CPV Central Committee General Secretary and President Nguyen Phu Trong declared that 2020 was, "Vietnam's most successful year in the last five years." At this critical moment in Vietnam's history, the 13th National Congress of the CPV will be held from January 25 to February 2 to continue the country's journey of socialist development.

At the Party's eighth plenary session of the 12th Central Committee of the CPV in October 2018, five interim sub-committees were formed to draft the key documents for the 13th Party Congress. The draft documents of the 13th Party Congress report were published for public feedback in October 2020. It can be seen that the CPV will continue to adhere to the party's leadership, the socialist system, and the reform path.

In addition, the draft has further promoted the building of a clean and strong party and political system in all aspects. This ultimately aims to explore deeper developments for the socialist democracy. Furthermore, the draft also indicates a profound desire for national development to continue with careful planning. With the guidance of CPV leadership, Vietnam will continue to maintain a stable and rapid development trend, deepen its reform and integrate into the world, fulfill the obligations of various trade agreements, and thus prepare itself for a higher status on the world stage.

In the context of China-Vietnam relations, the year 2020 marked the 70th anniversary of their diplomatic ties. This 70-year partnership has gone through more vicissitudes than the 25-year Vietnam-US relationship and the over four decades of China-US relations. To develop socialist path that accords to each country's national condition is a key bond between Beijing and Hanoi. The two countries are indeed committed to a community for a "shared future" on the glorious road of socialist development.

In 2020, the COVID-19 pandemic brought obstacles to the two countries' trade and supply chains. But even under such a strained scenario, bilateral trade between China and Vietnam kept momentum. China has remained the largest trading partner of Vietnam, and Vietnam recently rose two places in ranking to become China's sixth biggest trading partner. After the 13th Party Congress of the CPV, with the Belt and Road Initiative and the "Two Corridors and One Economic Circle" plan, the potential for the two countries' cooperation will be further unleashed.

The US will still be a key influence on China-Vietnam relations. After all, Washington keeps interfering in maritime disputes in the South China Sea. Some predict that the Biden administration will view Vietnam as a critical partner in its South China Sea strategy. But years of experiences and lessons have taught the CPV to prioritize political stability over empty promises from Washington. Stability, rights and development are subtly chained together. Vietnam has learned lessons that the US only offers support when it needs it for its global strategic competition. Hanoi will not totally lean toward Washington as a puppet. Striving for balance is the most realistic choice for Vietnam.

Last, the 13th National Congress of the CPV will elect new leaders. The main leadership will surely continue to lead the Central Committee of the CPV to adhere to the established diplomatic policy of independence, multilateralism, and diversification.

(The author is an assistant research fellow of the Institute of South and Southeast Asian and Oceania Studies at the China Institutes of Contemporary International Relations.)