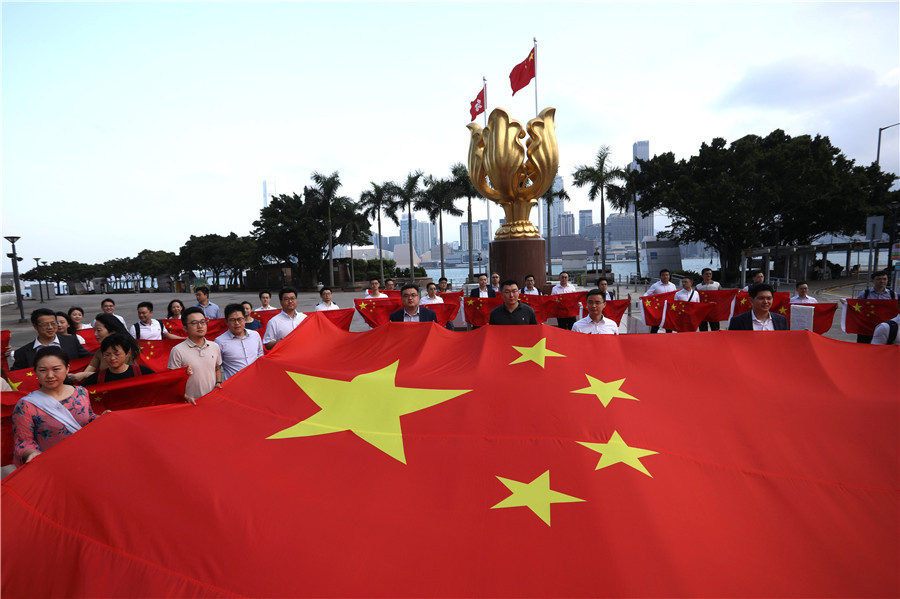 The national security situation in the Hong Kong Special Administrative Region has deteriorated rapidly over the past years. Riots and acts of terrorism dominated the landscape in Hong Kong in the second half of 2019, with pro-independence elements inciting an increasingly violent rebellion against the government. The SAR government and the city have been paralyzed by the violent anti-government demonstrations. The violence stopped for a few months due to the novel coronavirus epidemic only to return recently.

Beyond the SAR, the war of words between Beijing and Washington has been escalating, and there is evidence to show separatist elements in Hong Kong have been funded and trained by organizations related to the US government. With all the demonstrations and riots being targeted at authorities in Beijing, Hong Kong is now the battlefield for a "hybrid war"－attacks by US forces and defense by the Chinese government. As such, national security is nowhere more seriously threatened and undermined than in Hong Kong.

Despite rising concerns, however, Beijing has not disregarded the uniqueness of Hong Kong under the "one country, two systems" framework. The National People's Congress, the country's top legislature, has still urged the SAR to pass a local version of the National Security Law in accordance with Article 23 of the Basic Law of Hong Kong, although on Thursday the NPC authorized its Standing Committee to plug a national security loophole in Hong Kong by introducing a national security legislation in the SAR.

The NPC's decision is based on concerns that the situation could deteriorate further in view of the troubles the US could trigger in Hong Kong to intensify the "new Cold War" it seems to have started against China. China cannot afford to be unprepared, especially with Hong Kong being politically the most vulnerable and economically the most valuable city in the entire country.

Even though there is a mechanism to apply national laws to Hong Kong by including them in Annex III of the Basic Law, the NPC will not simply include the existing National Security Law to it, but introduce national security legislation specifically for Hong Kong, thereby taking into account the particularities of the Hong Kong system.

The NPC decision also stipulates that national security organs of the central government will set up agencies in Hong Kong that will operate according to law. The SAR government, too, will establish institutions and an enforcement mechanism for national security, and the two will probably work together to close the national security loophole in Hong Kong. The explicit legal requirement means greater transparency and a rule-based regulation for their operation, the same as in many developed societies and much more accountable than the system practiced by the British before China resumed its sovereignty over Hong Kong in 1997.

The implications of the NPC decision are that the Chinese government, including the central and SAR governments, will address the issues of national security in Hong Kong openly and formally. This will close any windows of opportunity that could be exploited by separatists and foreign subversive forces to undermine China's sovereignty over the city.

The initial responses to the decision have been sporadic protests in Hong Kong and international pressure, but neither can change the steadfast position of the central government. Instead, the use of violence by the demonstrators in Hong Kong and the reaction of foreign governments that have been hostile toward Beijing confirm the need and urgency for national security legislation.

The NPC decision has been explained with extensive details and without ambiguity, making it clear that it will oppose interference in Hong Kong affairs by any external forces in any form by taking necessary countermeasures. The comprehensive countermeasures should be able to stop any direct and indirect political intervention by hostile overseas forces, which we have been seeing in the demonstrations and riots in Hong Kong.

The outcome will be a more-transparent political process that offers no pretext or cover for subversion and will allow the general public, including the overseas media, to gain an undistorted understanding of the inclinations and motives as well as the possible consequences of any such subversive activities in Hong Kong. It probably also means that one of the major tasks of the newly established agencies of the national security organs will be to stop overseas interference in the city.

The "new Cold War" the incumbent US administration is trying to trigger is unwarranted and unjustified no matter which perspective you view it from. Therefore, China has to safeguard its national sovereignty, territorial integrity and political stability by fending off any attacks targeting Hong Kong. Hong Kong is crucial to China's resurgence, as it represents institutional innovation that both defends and improves the political governance of China.

The author is director of the One Belt One Road Research Institute, Chu Hai College of Higher Education, Hong Kong. The views do not necessarily reflect those of China Daily.