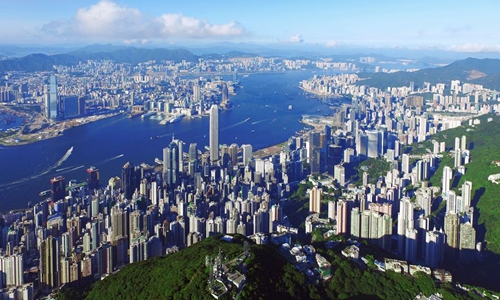 Aerial photo taken on June 27, 2017 shows the scenery on both sides of the Victoria Harbour in Hong Kong SAR, South China. (Photo: Xinhua)

One legislation won't change Hong Kong, nor would it be the end of the 'one country, two systems' principle, said Ronny Tong Ka-waha, member of Chief Executive Carrie Lam Cheng Yuet-ngor's cabinet, the Executive Council, noting that after the new national security law is enacted, the Special Administrative Region (SAR) would still be responsible for pushing forward Article 23.

"Based on my understanding, the new national security law mainly targets Hong Kong secessionists, which is a relative small group, and more criminal cases relevant to national security have yet to be handled based on Article 23," Tong told the Global Times, noting that it has been seven months since the Legislative Council passed a law while the existing laws are outdated.

Previously, secessionism wasn't questioned in Hong Kong, so how could the outdated laws to be applied to today's situation, Tong asked, noting how necessary it was for the central government to enact laws that address this issue.

The HKSAR government advisor said that throughout the years, HK secessionism had made the city unstable, so new laws that address this are needed. In the long run, the national security law would benefit every Hong Kong resident.

"Also, I don't believe many people would be arrested and prosecuted once the law went into effect," Tong said.

Foreign officials and media outlets have claimed Hong Kong's status as a global financial hub would end due to the implementation of the National Security Law, with unsubstantiated reports of capital flight.

However, Tong said that Hong Kong has integrated and comprehends the legal system, medical institutions and, "I don't believe one legislation would cause fundamental changes to our financial status," he added.