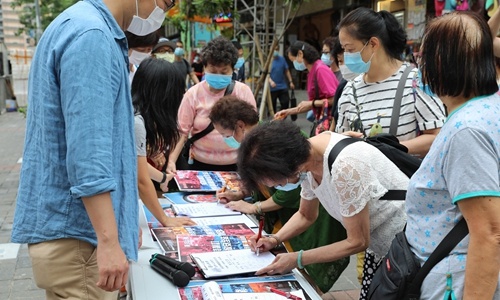 The law if passed reflects a conventional practice among global countries to prevent their administrative regions from being void of national security, observers said, citing the national security laws that many other countries have enacted over the years.

The US, where politicians including Secretary of State Mike Pompeo bluster about the national security law for Hong Kong, is actually one of the countries that has issued the most laws related to national security, Li Haidong, a professor at the Institute of International Relations of the China Foreign Affairs University, told the Global Times on Monday.

The dozens of laws that the US has enacted, from its Alien Enemies Act of 1798 to the recent Cybersecurity Information Sharing Act of 2015, show a constant sense of urgency that the country has had for national security threats at different times, Li said.

The US National Security Act against treason and subversion, which the then President Harry Truman signed in 1947, has been revised several times during the past 70 years. The crime of treason can lead to a maximum sentence of death and government subversion activities carry a penalty of up to 20 years in the US.

The 9/11 attacks in 2001 brought the US government's fear of terrorism to a boiling point, leading to the Patriot Act - a new national security law which expanded the powers of US law-enforcement departments in monitoring citizens' information and in detaining and expelling expatriates suspected of having links to terrorism.

The Patriot Act was reported to have caused many power abuse issues by the US government. In 2009, AirTran Airways kicked nine South Asian Americans off a New Year's Day flight after other passengers reported hearing their remarks about "the safest place to sit on an airplane," reported The Seattle Times in January 2009. The nine people were later proved not to be a threat to national security.

The key parts of the controversial act were suspended by the US congress in May 2015 due to wide and harsh criticism, US media reports said. Nonetheless, most of its contents were later repackaged as the USA Freedom Act, which is still implemented.

The public also found that the US' legislation on national security is increasingly reaching into more specialized fields, such as the Foreign Agents Registration Act and Foreign Missions Act that the country issued to control the actions of foreign individuals and institutions in the US.

Since the Trump administration began, it has passed laws including the Foreign Investment Risk Review Modernization Act and Export Control Reform Act in the name of protecting "economic and national security interests," restricting foreign investment in sensitive industries and tightening export controls.

It is also the case that the US has a sense of its own superiority, believing that different political systems and values are wrong, and it is accustomed to dealing with international affairs with overwhelming force, which shows its desire for hegemony, Li said.

The US is concerned about China's rise, so it is always confrontational when dealing with China, Li noted.

Similar to the US, European governments also attach great importance to establishing and improving their national security legislation. Plagued by separatist forces, Spain issued its National Security Strategy in 2013 and enacted a National Security Law in 2015.

The Spanish government was reportedly aiming to deal with Catalonian separatists with the national security law after their violent demonstrations last October. It enacted the law without the cabinet's vote of approval, allowing it to mobilize "all police forces" to avoid public-order chaos and economic losses if necessary.

Based on the national security law, the Catalonian regional government must obey the Spanish central government in the act's enforcement, such as letting national police take command of the local autonomous police force.

Almost the whole of Europe supported the Spanish central government in dispatching [police] to keep order in Catalonia when the riots took place last year, said Cui Hongjian, director of EU studies at the China Institute of International Studies in Beijing.

"It is widely accepted that when it comes to national security issues, a country's central government is entitled to directly [manage] its [autonomous] regions," Cui told the Global Times Monday.

Observers also mentioned Russia's national security laws. In 1992, the Russian federation promulgated four laws relating to state security in the face of a series of geopolitical and terrorist threats after the fall of the Soviet Union in 1991.

A new version of Russia's National Security Strategy for 2020, signed by  President Vladimir Putin at the end of 2015, emphasized strengthening defense as a national priority.

The strategy stated the main threats to the security of Russia and its society, including radical activities by foreign and international non-governmental organizations, financial and economic institutions as well as individuals utilizing nationalism and religious extremism ideologies, such as instigating the notorious "color revolutions."

Facing a refugee crisis, an increasing number of European countries have changed or improved their security legislations to prevent possible terrorist attacks, Cui said. Once dubbed as one of the safest countries in the world before suffering several terrorist attacks in recent years, Germany, for instance, has undertaken many laws and polices under the framework of its Basic Law.

Germany improved its national security law system over time. It passed the German Emergency Acts in 1968 to restrain the left-wing rebel organizations during the Cold War, and enacted a series of laws in the fight against arms and drug trafficking. It passed laws specifically targeting terrorism after the 9/11 attacks.

China had a relatively late start in introducing its comprehensive national security legislation compared with other major countries, Cui said. It started implementing the new National Security Law in 2015 based on the law's previous version made in 1993.

"China to some extent adopted the experience of the West, including the US and European countries, in making national security laws," Cui said, adding that the fight against extremist behavior like secession and subversion has been basis of legislation in various countries.

The central government is responsible for upholding national security, which is the same in any country, said Chinese Foreign Minister Wang Yi at a press conference on Sunday when asked about the proposed national security legislation for Hong Kong.

The implementation of the new national security laws in Hong Kong will improve the region's legal system and contribute to a better business environment, said local businesspeople.

Felix Chung Kwok-pan, honorary president of the Hong Kong Apparel Society, said that a stable business environment and policies are crucial for Hong Kong's business circles, according to a report by news site Deutsche Welle (DW).

"The national security law will help promote the business environment in Hong Kong," Chung said, adding that some shops were forced to close by the violent demonstrations, which kept foreign buyers and traders away from the region for fear of danger. "How could we do business (in that case)?" he said.