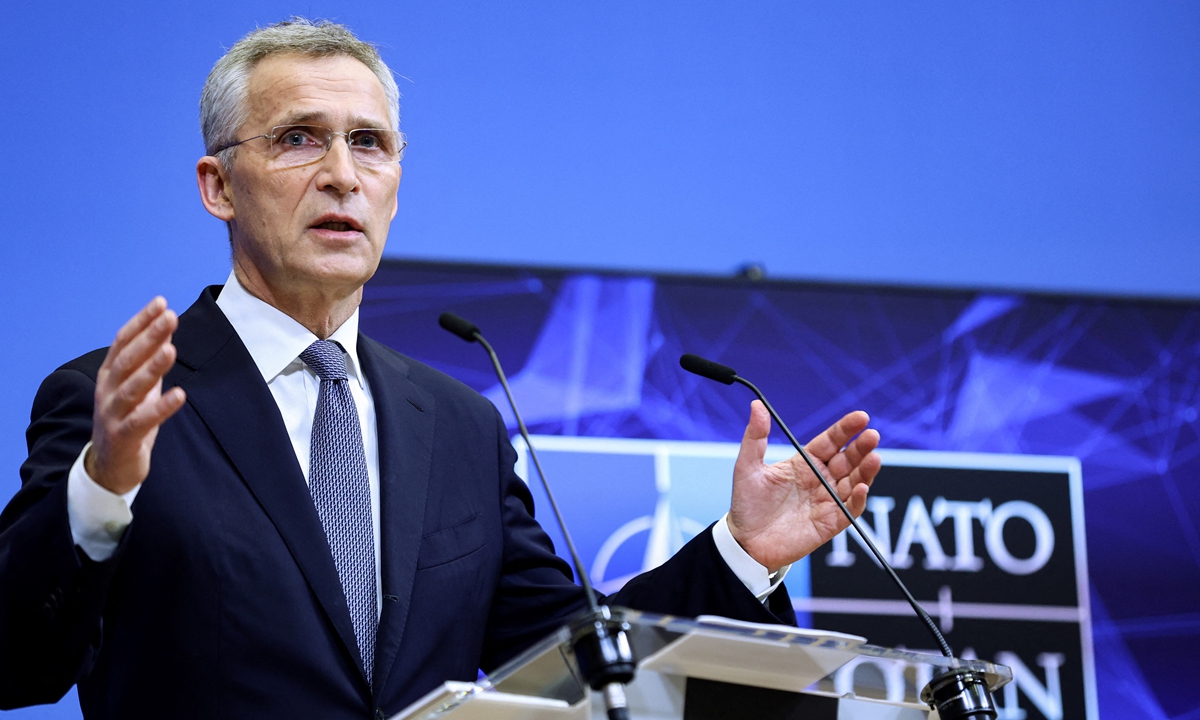 NATO Secretary General Jens Stoltenberg speaks during a press conference ahead of the alliance's Defence Ministers' meeting at the NATO headquarters in Brussels on March 15, 2022. (Photo: AFP)

In an interview with the German newspaper Bild published on Sunday, NATO Secretary General Jens Stoltenberg warned that the Ukraine war could last for years and the West must prepare for it. He then urged Western countries to "not cease to support Ukraine" despite high costs.

The fire of war has raged in Ukraine for almost four months. Stoltenberg's prediction sounds more like a plan and a wish of NATO, a military alliance that can profit from the prolonged war in Ukraine.

Chinese military expert and TV commentator Song Zhongping told the Global Times that what could last for years, in fact, is the state of confrontation between Moscow and Kiev.

"Such a state can stall Russia and will eventually weaken Russia, just as NATO and the US have anticipated," Song said.

As for how long the war could last, the answer lies in how much more military aid the West can provide Ukraine because the Ukrainian military alone has no capability to engage in a dragged-out military conflict.

However, it is naive for Stoltenberg to expect all NATO members to help Ukraine against Russia. After all, the NATO secretary general has no right to order 30 sovereign countries to follow his lead to boost support for Ukraine.

Song claims that there is no way for NATO to form a joint effort to prepare for a prolonged war with Russia because most NATO members supporting Ukraine have already felt exhausted and frustrated.

UK Prime Minister Boris Johnson on Saturday expressed concerns that a bit of "Ukraine fatigue" is starting to set in around the world.

Some countries supporting Ukraine since the beginning of the Russia-Ukraine war are feeling increasingly overwhelmed if they continue aiding Ukraine. For many, the war in Ukraine is like a bottomless pit that keeps requesting more input while giving nothing back.

A recent survey conducted in 10 European countries showed that even though the support for Ukraine remained strong, the concerns of people in these countries have shifted to the broader effects of the ongoing conflict. Many are quite worried about the potential higher cost of living resulting from the war. Moreover, a deepening division has come into being between those who want a quick end to the Ukraine war and those who want Russia punished.

In a Los Angeles Times opinion piece on Sunday entitled "War in Ukraine is a battle of wills and economic pain - and the West is showing fatigue," the author writes, "Even in the United States, however, inflation has eroded public support for the war."

According to an Associated Press poll in April, the majority of US voters called for tough sanctions against Russia regardless of possible US economic pains. But one month later, most people gave limiting damage to the US economy the top priority.

Stoltenberg is pushing the West, mainly Europe, to even greater suffering in terms of economy and society. He seems to have forgotten the high costs that he wants the whole West to disregard will have to be paid in the end by many Western countries and their people. It is totally irresponsible for him to do so.

As NATO faces the Ukraine war, what it claimed to be "the greatest security crisis in a generation," the alliance extended Stoltenberg's term as the secretary-general in March by a year.