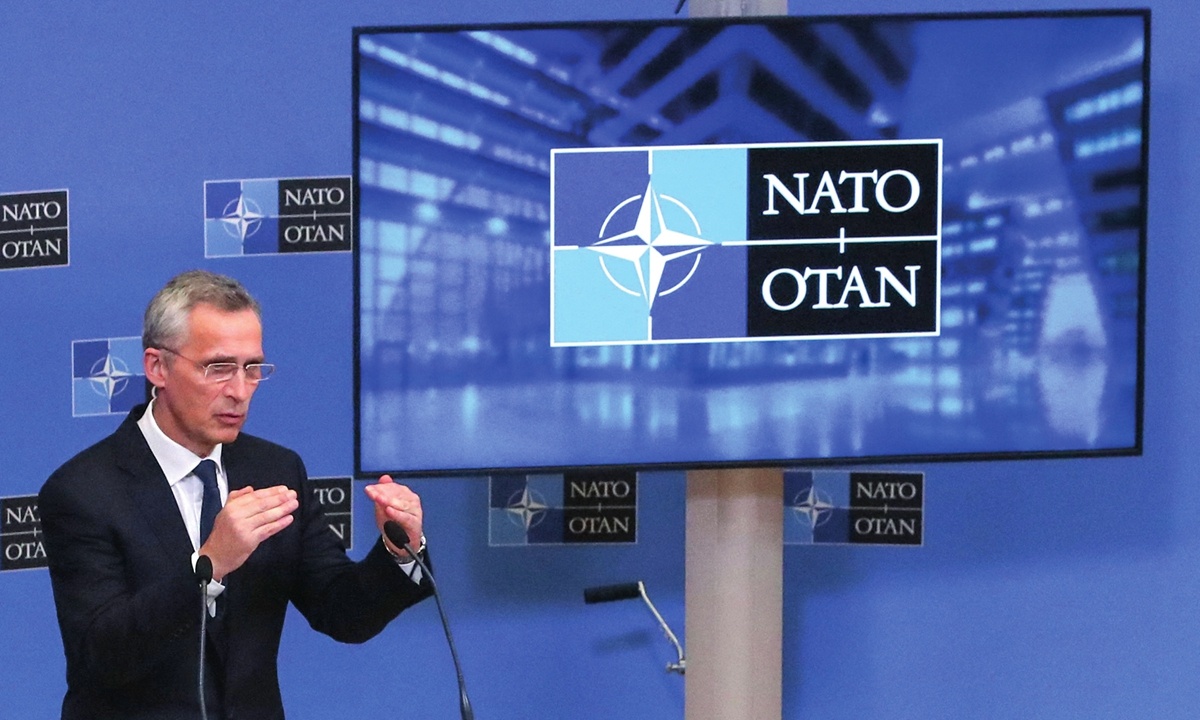 NATO Secretary General Jens Stoltenberg holds a press conference following a NATO foreign ministers in-person meeting at NATO's headquarters in Brussels on Tuesday. The alliance had not made a final decision regarding troop withdrawal from Afghanistan, a deadline that is 40 days away. (Photo: VCG)

When NATO Secretary General Jens Stoltenberg visited the US on Monday and met with US President Joe Biden at the White House, he sent a very dangerous message there.

"China will soon have the biggest economy in the world, they already have the second largest defense budget, the biggest Navy, they are investing heavily in advanced military capabilities, and they do not share our values," Stoltenberg said with the press outside the White House on Tuesday.

What do his remarks imply?

We won't forget that the North Atlantic Treaty Organization (NATO) is a primarily military alliance. Any military bloc is established to respond to and prepare for wars and has a clear adversary target. Will NATO regard China as its future target simply because China has different values?

As the leader of NATO, Stoltenberg should be very careful about his statements in an era of peace. Yet he chose to make such irritating remarks. This goes beyond simply an attempt to please the US, and could be regarded as a threat to world peace.

Since the end of the Cold War and the collapse of the Warsaw Pact, NATO has lost its reason for existence. But a force in the US and Europe has kept hyping up and exaggerating the threat of war. They have even created threats of war and imaginary enemies with an attempt to make the military bloc continue to be a pillar sustaining US-Europe unity.

However, the reality is that the risks of war have greatly reduced in Europe. And the main goals pursued respectively by the US and Europe have become different from those during the Cold War era.

Although the US has waived some sanctions, US Secretary of State Antony Blinken warned in May that the Nord Stream 2 pipeline that is being built from Russia to Europe will weaken the energy security across the EU and beyond. But Germany needs this project. When the $11 billion project is completed, a 1,224-kilometer-long pipeline will double Russia's natural gas transmission to Germany. This will be greatly beneficial to Germany's economic development.

The recent revelations that the US used Denmark's secret services to spy on European leaders also show that the Americans are now pursuing goals different from those during the Cold War.

In 2012, Denmark planned to buy new fighter jets. Those who provided a bid at that time included Swedish defense firm Saab, which manufactures the JAS 39 Gripen, and American companies.

At this critical juncture, the US' National Security Agency (NSA) gathered information of relevant European countries and companies and spied on the Danish finance and foreign ministers as well as the phone calls and emails of targeted employees of Aarhus-based defense company Terma.

In May 2016, the Danish government announced that it planned to spend $3 billion to buy 27 F-35 fighter jets from US defense company Lockheed Martin Corp. Terma would provide components for it.

Former NSA employee Edward Snowden viewed Europe as an intelligence market. The NSA uses its intelligence system set up during the Cold War to monitor its targets in this market "legally" to get information it needs. "Big Brother" USA tactically imposes surveillance on its European buddies to exploit profits for itself.

Actually, the Danish Defense Intelligence Service in 2014 conducted an internal investigation into whether the NSA had used its cooperation with the Danes to spy on Denmark and neighboring countries. This shows that conflicts between the US and Denmark are expanding.

From the perspective of the EU's development, the objective of integration is clear - becoming one polar that can compete with the US on a global scale.

Especially since the 2008 financial crisis, the Europeans have been aware that their model is different from the US one. They are even able to surpass it, but it needs to comprehensively improve economic strength.

Desmond Dinan, the Jean Monnet Professor at the George Mason School of Public Policy, believes that the success of the EU economy should not come at the cost of society; while the US' economic development may not be confined by society, the EU's economic development has a strong social criterion.

The main factor that affects future US-Europe ties is becoming the competition between different models. This is why Washington cannot resort to the traditional Cold War-style approach to woo the EU and restructure its allies.

The fact that Stoltenberg wants to increase NATO's popularity by hyping up ideologies does not fit the interests of the EU - and thus is futile.