OPINIONS NATO naming China the enemy will lead to consequences

NATO naming China the enemy will lead to consequences 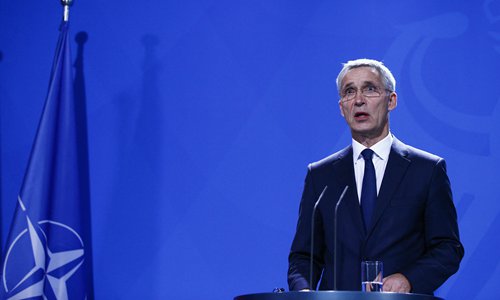 Some people in the US are designing NATO's top concern and have found a new enemy for the organization - China. According to VOA, US President Donald Trump will meet with NATO Secretary-General Jens Stoltenberg later this week and the so-called security threat from China will be one of major topics on their agenda. However, NATO should know better on what it means to take on China as its enemy.

On October 25, US Defense Secretary Mark Esper said, "NATO allies must carefully consider the long-term risks of the choices they make regarding 5G networks… I'm pleased that NATO's moving forward to more thoroughly assess the long-term challenges that a growing and more assertive China presents to the alliance."

This is not the first time for Washington to suggest NATO put the focus on Beijing. At the 70th anniversary celebration of the security alliance, US Vice President Mike Pence said, "Perhaps the greatest challenge NATO will face in the coming decades is how we must all adjust to the rise of the People's Republic of China."

NATO, for its part, echoed this concern. In August, Stoltenberg noted that NATO needs to understand the implications of China's rise, which may pose a threat to its member states.

NATO was formed amid tensions between Western countries and the former Soviet Union during the Cold War. Its main purpose was to defend member states from threats by communist countries. Its opponent, the Warsaw Pact, collapsed with the end of the Cold War, but the military nature of NATO has not changed.

Normally, the cohesion of any military alliance stems from military collaboration, which requires a common enemy among its members. Terrorism and Russia have been NATO's bitter enemies. But now, the bloc is looking for a new target. Led by the US, the organization is fixing their eyes on China.

Thanks to the US, the danger of a new Cold War is approaching the Asia-Pacific region. September 26 witnessed the first ministerial level Quadrilateral Security Dialogue - known as Quad - in New York between the US, Japan, India and Australia. US politicians call it "a significant elevation" of the level of dialogue, while quite a few observers argue that Quad, which takes aim at China, is now more likely to evolve into an "Asian NATO."

Worse, certain people and forces in the Asia-Pacific are following US steps to hype the so-called China threat. In August, the United States Studies Centre at the University of Sydney released a report, claiming "Chinese counter-intervention systems have undermined America's ability to project power in the Indo-Pacific, raising the risk that China could use limited force to achieve a fait accompli victory before America can respond; and challenging US security is guaranteed in the process."

Nevertheless, attempts to revive military confrontation as during the Cold War and plunge more countries into conflicts in the current era will lead to nowhere. It is not hard to figure out why Washington wants to do this. It has labeled China a "rival power" and is heading toward a path of comprehensive confrontation against Beijing. But if others follow suit, they will only pay a greater price.

Over the past decades, China has developed its economy at a rapid pace while seeking increasing economic cooperation with other countries, sharing its development experience. Not only that, its military strength is gradually closing in on its economic might. China pursues a national defense policy defensive in nature. But "defensive" also means when facing threats or provocations, China's military is not just for show.

When Stoltenberg made clear statements aimed at China, he should know that as the head of a military organization, military hostility can easily be sensed. NATO members should be well aware.