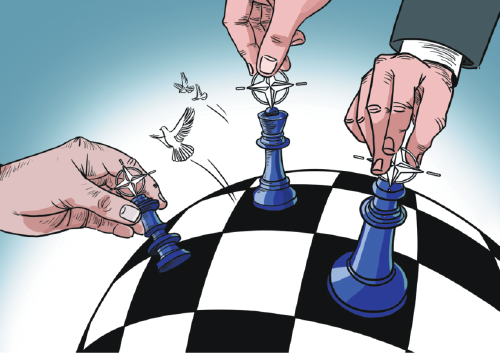 The heads of state or government of Australia, New Zealand, the Republic of Korea and Japan have been invited to attend the ongoing three-day NATO Summit in Madrid which concludes on Thursday, signaling the military alliance's move to expand to the Asia-Pacific region with the aim of helping the United States contain China. It seems some NATO members are trying to shift NATO's focus to check China's peaceful rise and create chaos in an era of peace and development.

Madrid is hosting the NATO Summit for the second time since Spain joined the transatlantic military alliance in 1982. The first time Madrid played host to the summit in 1997, NATO member states discussed the organization's eastward expansion, with Hungary, Poland and the Czech Republic joining the bloc the same year.

NATO's decision to hold the summit in Madrid again reflects its intention to expand, by admitting not only Sweden and Finland that have already applied to join the bloc but also paving the way for Japan, the ROK, New Zealand and Australia to participate in NATO's activities. Yet the participation of the Asia-Pacific countries in the summit is not in line with the geographical scope of the NATO agreement, and the security issues in Europe and the Asia-Pacific are being forcibly linked together.

It is clear that NATO's eastward expansion is aimed at encircling Russia, however its expansion into the Asia-Pacific is designed to contain China's development, as NATO has been hyping up the "China challenge" in recent years. For example, in 2019, NATO issued the "London Declaration" which for the first time described China as a country that presents "both opportunities and challenges". Since then, NATO has increased vigilance against China, and mentioned China in its annual report for four consecutive years.

It is also clear that the US is driving NATO's expansion. On April 21-22, US Deputy Secretary of State Wendy Sherman and European External Action Service Secretary General Stefano Sannino co-chaired the third "EU-US Dialogue on China" and the second EU-US consultation on the "Indo-Pacific".

The main purpose of Sherman's visit to Europe then was to meet with NATO's and Washington's European allies to discuss issues such as the Russia-Ukraine conflict, the "China challenge", and the expansion of NATO and the European Union into the "Indo-Pacific" region. Actually, US Senator Ben Sasse has been urging the US to create a "NATO for the Pacific" in response to China's "offensive". Indeed, the US is pushing for NATO's expansion in order to reduce the cost of its own "strategic competition" with China.

Taking advantage of the developments in the West, NATO announced that a new strategic concept－that China's rise poses a challenge to NATO's security－will be adopted at the Madrid summit. On June 17, NATO's official website posted an update on its ties with Asia-Pacific partners, saying "relations with like-minded partners across the globe are increasingly important to address cross-cutting security issues and global challenges". Hence, its four Asia-Pacific partners were invited to attend the Madrid summit.

However, NATO may be caught in a triple trap if it expands into the Asia-Pacific, leading to its inevitable decline. First is the security trap. With the disputes between China and the US intensifying, many experts have urged the two sides to avoid the Thucydides trap. Yet, ignoring sage advice, the US pressed ahead with NATO's eastward expansion, which triggered the Russia-Ukraine conflict, which will also heighten tensions in the Taiwan Straits, and intensify the competition between Beijing and Washington. As such, contrary to its claim of guaranteeing security, the US-led NATO has made the world more insecure.

Second is the democratic trap. NATO's expansion into the Asia-Pacific means even small European countries have to pay for the military undertakings in a region with which they have no geographical relation. This in turn could affect European coalition. More important, NATO claims to safeguard "human rights, rule of law and democracy", but despite that the US is desperate to maintain its global hegemony. So, with the US at its helm, how can NATO safeguard democracy?

The third is the order trap. According to sociologist Charles Tilly's theory "war made the state and the state made war." The anxiety and insecurity created by NATO's expansion highlight the shortcomings of the world order based on the Western concept of sovereign states. Hence, in the long run, NATO's expansion will upset the West-dominated world order.

In his keynote speech at the opening ceremony of the BRICS Business Forum on June 22, President Xi Jinping said that certain countries, in their attempt to expand military alliances to pursue absolute security, have coerced other countries to choose sides and created confrontations. In doing so, they have violated other countries' rights and interests, he said.

Driven by the US, NATO's expansion has amplified regional and global security issues, resulting in a waste of resources, public panic and out-of-control policies. That could slow down global development, and if global development stagnates for long, the triple trap around NATO will tighten, eventually leading to its decline.