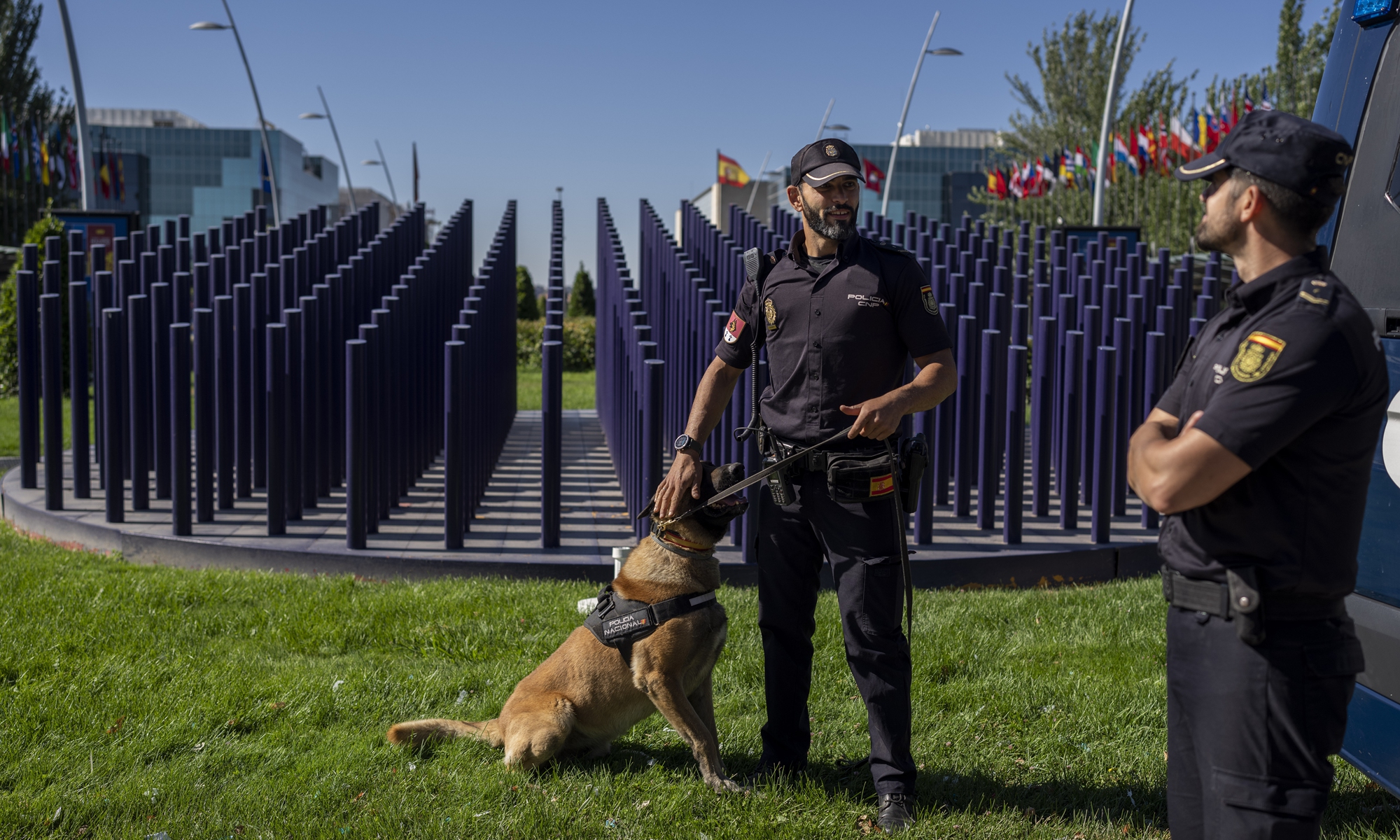 Police officers stand guard outside the NATO Summit building ahead of the summit in Madrid, Spain, Monday, June 27, 2022. （Photo: VCG）

On the heel of the G7 summit, NATO leaders are scheduled to convene in Spain from Tuesday to Thursday for their annual summit with the main focus on Russia and toughening up its stance toward China, while analysts said including China in the US-led military bloc's new strategic concept cannot help alleviate US divergences with the EU, especially on China, and severe domestic problems will also weaken Washington's ambitious plan to maintain hegemony.

The NATO summit, to be held in Madrid, will for the first time include the top leaders of four Asia-Pacific countries, Japan, South Korea, Australia and New Zealand, and also for the first time, the bloc will identity China in its new strategic concept, a key document on NATO's future security trial and military development to be adopted at the summit.

NATO and some of the US allies have ramped up efforts to hype the so-called China threat. For example, the White House released the readout on US President Joe Biden's meeting with German Chancellor Olaf Scholz on Sunday ahead of the G7 summit, in which it noted that the two leaders discussed the challenges posed by China. An anonymous White House official was also cited by Reuters as saying that the US is confident that NATO's new strategy document will include "strong" language on China.

NATO will massively boost the number of troops on high readiness to over 300,000, Secretary-General Jens Stoltenberg said on Monday.

The current NATO Strategic Concept which was agreed at the summit in Lisbon in 2010 did not mention China. Analysts said that it is not surprising to see the upcoming new strategic concept include China since during last year's summit in Brussels, the bloc had adopted a tough rhetoric on China's military build-up, growing influence and "coercive economic" measures.

NATO chief Jens Stoltenberg also told an event organized by Politico in Brussels on June 22 that it is a big step for NATO to include China in its current Strategic Concept as "China is openly contesting the rules-based international order" and poses some challenges to "our values, our interests, and our security."

At the G7 and NATO summits, the US is going to serve as the baton to mobilize the West to take China as an adversary - mostly by combining China and Russia. This is a new version of the cold war and by coercing other countries to reduce their exchanges with China on economy and other fields, the US attempts to exclude China from the global community, Xiang Haoyu, a research fellow at the China Institute of International Studies, told the Global Times.

For example, on Sunday at their annual gathering, G7 nations pledged to raise $600 billion in private and public funds over five years to finance infrastructure in developing countries and counter China's Belt and Road initiative.

The inclusion of China in the "Strategic Concept" means that China will become a priority of NATO in the next few years, which will also affect the direction of its foreign policy and strategy, Yuan Zheng, a deputy director and senior fellow of the Institute of American Studies, the Chinese Academy of Social Sciences, told the Global Times on Monday.

NATO, a legacy of the Cold War, is increasingly extending its reach beyond Europe, to the Asia-Pacific region particularly, where it hopes to play a more prominent role, suppressing the development and influence of Russia and China, Yuan added.

The focus of NATO's global strategy and geopolitics seems to be in the Russia-Ukraine conflict, but it is really in the Indo-Pacific region around China. The US sees China as a main competitor and is using all means to contain it. Other Western countries also want to take good positions in the area given the region's significance in the global supply chain and future developments, Xiang said.

Hyping so-called China threats will offer NATO and the US more excuses and "legitimacy" to be involved in the Indo-Pacific region, Xiang said, pointing out that some countries in the region, especially Japan, have been working to help serve as the pivot for NATO to enter Asia.

On Saturday, before his five-day trip to Europe, Japanese Prime Minister Fumio Kishida was quoted by Japanese media as saying that Japan hopes to boost cooperation with NATO "to a new stage." Analysts warned that Japan's advocacy of an "Asian NATO" or "global NATO" goes against the times and could lead to a new cold war or even a hot war given the previous catastrophes and destruction the US-led military alliance has made globally, including in Afghanistan.

In the context of the current Russia-Ukraine crisis, the US and the West have demonstrated an unprecedented unanimous tough stance, Yuan said, noting that the US has been hyping the theory of "the axis of authoritarianism" between China and Russia, which directly leads to rising anxiety in European countries about China, and China-Europe relations have encountered relatively great difficulties. 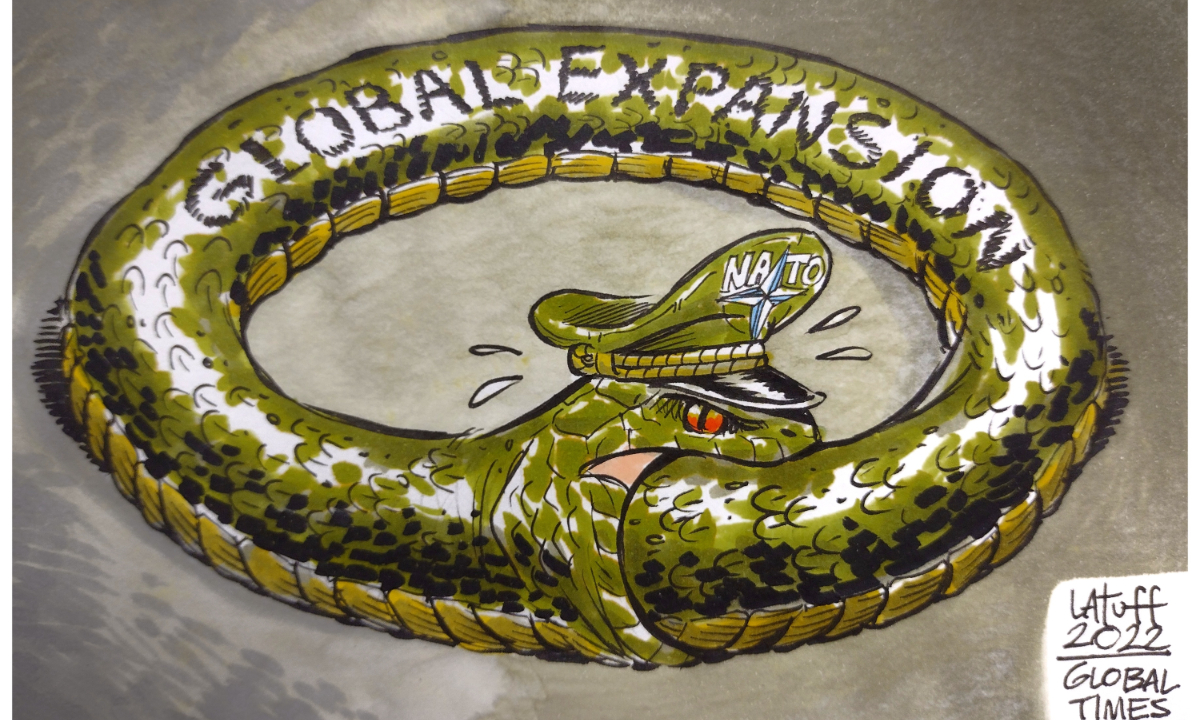 NATO swallows the consequence of its expansion （Illustration: Carlos Latuff）

Divergences on China
While the US is working hard to impose its strategic purposes to its allies, attempting to tie China and Russia together, comparing Ukraine with the island of Taiwan, and to mix the security of Asia and Europe together to seek profits, there are divergences between the US and some Western countries, which may make it hard for the US to realize its ambitious plan, Cui Hongjian, director of the Department of European Studies at the China Institute of International Studies, told the Global Times on Monday.

Major powers in Europe want to put the Russia-Ukraine conflict under control and bring the two sides to the negotiating table, while the US and Japan want to use the crisis to prolong the geopolitical conflict into a long-term confrontation, Cui said, noting that some countries in Europe insist that China will not challenge the international order with military forces given its development paths in the past decades.

Cui said that China and the EU have different stances on many issues but the two sides hope to work in the same direction and to stabilize relations not only in trade but also bilateral relations. The US hype of the China threat and pressure on the EU is a test for the leading countries in Europe on whether they can maintain strategic autonomy.

The US has been committed to expanding its alliance system around the world, but it is difficult to establish a new NATO in Asia. The culture, history, values and other factors of Asia-Pacific countries make China's influence in this region hard to ignore, Yuan said.

Yuan also noted that China pursues an independent foreign policy of peace and win-win cooperation, and with the deepening of China-Europe exchanges, European countries' perception toward China will also improve.

US political elites' plans to maintain its hegemony by using the Ukraine crisis have also worried some of its allies and such an ambitious global project will also be weakened by its domestic problems. Gun violence, racism, the wider and increasing rage toward the US' Supreme Court decision to overturn abortion ruling… all these have reminded the world that the US is far behind its Golden Age, analysts said.

The EU also faces serious problems on energy, social welfare, soaring inflation, and human rights problems. Some observers have warned it may lose the best change to solve domestic problems and will only harm the world if still follows the US in making a speculative strategic arrangement.