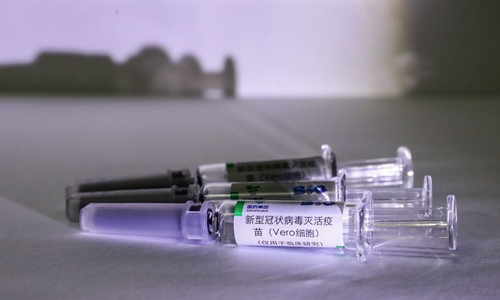 The last thing the world needs in the face of the global coronavirus pandemic is groundless conspiracy theories, which are not only misleading but also interfere in global efforts to combat the virus. But some US politicians, turning a blind eye to what people in the US really need, only care about how to seize political interests by stigmatizing China.

White House trade advisor Peter Navarro hit a new low when he told the Fox Business Network on Monday that China may not have shared data on early coronavirus infections, because "they're racing to get a vaccine and they think this is just a competitive business race, it's a business proposition so that they can sell the vaccine to the world."

His assertion was ridiculous and confusing, right and wrong in many ways. For starters, China tried its best to share COVID-19 information with the world, reporting detailed data on the epidemic situation and the genetic sequence of the virus to the World Health Organization at the earliest possibility.

Second, China has never thought of achieving supremacy in a vaccine. In the early days of the outbreak, there was already certain collaboration among American and Chinese scientists on vaccine research and development. And it was the US that tried to block China from global research cooperation and seek virus vaccine monopoly.

Third, Navarro's rhetoric also suggested that whomever develops a vaccine would hijack the world for business interests. Instead, companies and institutions around the world are racing to develop vaccines, which are the only hope to bring the global pandemic under control.

The coronavirus is a common enemy of all human beings. It would be a good thing if any country can develop a vaccine as soon as possible, and that should by no means be politicized.

Navarro's criticism is an extension of his long-time anti-China stance. This is not the first time that US politicians like Navarro have tried to attack China by creating baseless conspiracy theories and attempting to contain China's high-tech development. And the ulterior motives behind such attacks are nothing but political interests.

If anything, Navarro and his like should focus more on their domestic battle against the coronavirus instead of spreading conspiracy theories to pass the buck to others. Exploiting the public health crisis to seize political interests will not work forever.