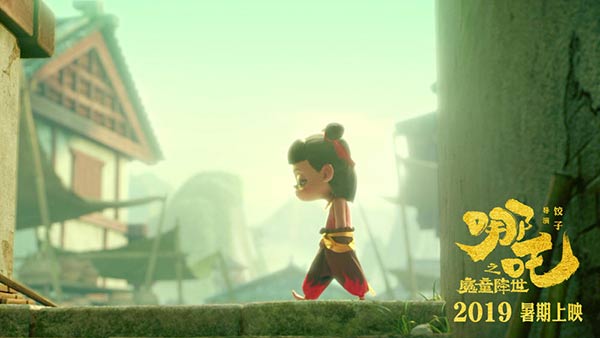 A still from the film Ne Zha (Photo: mtime.com)

But in the two weeks since being released in North America, the film has made less than $3 million. Still, Ne Zha's box office in North America is higher than the $2.72 million by Wolf Warrior 2, the top box office grosser on the mainland. Wandering Earth, China's third-highest-earning film, performed better than both in the North American market, making $5.88 million at the box office.

The huge gap in the earnings of Chinese films in the domestic and overseas markets is a reminder to Chinese filmmakers that they have to use an innovative "going global" strategy to succeed.

Certain publicity shortcomings marred Ne Zha's box office performance in North America. First, as a foreign language film whose target audience is children, the film should have been dubbed in English. Instead, the film's prints being screened in North America only have English subtitles.

Second, Ne Zha wasn't sent for movie rating before being screened in North America, so the film received the "unrated" label. Since parents in the West regard such films as not appropriate for children, many of them didn't feel the need to take their kids to watch it.

Third, given the cultural differences between China and North America, the film's publicity materials should have explained, in brief, the moral behind Ne Zha's story to make it more appealing to foreign audiences.

Unlike Crouching Tiger, Hidden Dragon, which had strong Chinese martial arts elements which attract foreign audiences most, the mythological figure of Ne Zha is not popular among foreigners, which could have kept audiences away in North America.

Exporting cultural products is a long-term process. And without continuous communication and better understanding, Chinese filmmakers and marketing experts cannot succeed in their mission of popularizing Chinese culture across the world.