During Nepalese Prime Minister K P Sharma Oli's six-day visit to China in June, some important agreements, MoUs and letters of exchange were signed, which will take Nepal-China relations toward a new era. 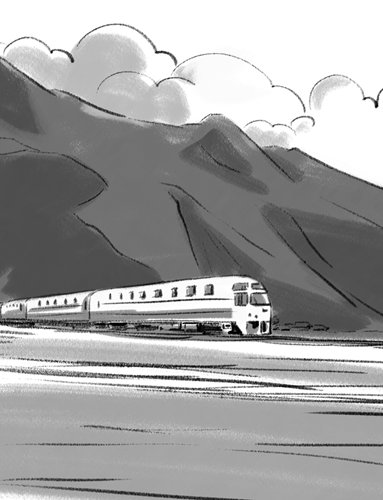 Oli had talked about Nepal's foreign policy in its immediate neighborhood for the first time while addressing the diplomatic community in the country on March 27. He said, "Serving our national interest and fulfilling our legitimate aspirations for economic development and prosperity will guide our engagements with our neighbors." "We enjoy cordial and friendly relations with both our immediate neighbors, India and China. Mutual trust will be the key ingredient of our relationship," Oli said.

He brought forth the concept of "Vibrant Economic Drive" of the neighborhood and all agreements with China this time closely relate to this concept.

One of the historic agreements made during Oli's visit is the signing of the MoU on railway connectivity. Both countries underscored it as the most significant initiative in the history of bilateral cooperation and hoped that it would herald a new era of cross-border connectivity.

The Kodari Highway constructed under King Mahendra in the 1960s had changed Nepal's geopolitics and Katmandu's foreign affairs had pivoted to other directions from being Indo-centric for too long.

The agreement with China for the construction of a rail link up to Katmandu after nearly 60 years of construction of the Kodari Highway, is the second milestone in the diversification and opening-up policy of Nepal. After the agreement is implemented, Nepal's fear-driven geostrategic compulsion will be reduced.

In keeping with the deal, Katmandu will be connected with Kerong, hopefully within a decade. On the other hand, India has already agreed to construct the rail link up to Katmandu. If the Nepal government can proactively work to implement the agreements on railways with China and India, the country can become part of the "Vibrant Economic Drive" not only in land connectivity but also in technological integration between the neighbors.

India is to some extent skeptic about the rail link from China under the framework of trans-Himalayan Multi-Dimensional Connectivity Network, but New Delhi should take it positively - as a trilateral economic partnership rather than a strategic drawback.

After the rail links to Kathmandu from the north and south are built, it will be the best opportunity for both neighbors to share benefits and contribute to each other's economic growth and prosperity.

Nepal believes that under the guidance of Xi Jinping Thought on Socialism with Chinese Characteristics for a New Era, the Chinese people will realize the two centenary goals and build China into a great modern socialist country that is prosperous, strong, democratic, culturally advanced, harmonious, and beautiful.

Nepal also appreciates Modi's developmental strategy "Sabka saath, sabka vikas" (together with all, development for all) and believes that India will prosper under it. Similarly, Beijing and New Delhi have expressed their commitment to assist Nepal in "Sammridha Nepal, sukhi Nepali" (Prosperous Nepal, Happy Nepali) so that it can realize its development goals.

In this way, if the three countries support each other to achieve their goals, trans-Himalayan cooperation for mutual prosperity will materialize under the trans-Himalayan Multi-Dimensional Connectivity Network.

Another milestone achieved during Oli's visit is the Protocol on the Utilization of Highways in Tibet Autonomous Region, China, by Nepal for cargo transport. Now it is believed that Nepalese exports to China will rise and Katmandu's trade deficit with Beijing will be reduced.

The Protocol on the Utilization of Highways in Tibet Autonomous Region by Nepal and MoU on Investment and Cooperation on Production Capacity will hopefully contribute to reduce Nepal's trade deficit with China significantly.

Moreover, MoU on Energy Cooperation; Agreement on Economic and Technical Cooperation; and deal on Human Resource Development Cooperation are some other agreements made with China during Oli's visit. The deal to deepen cooperation in economy, trade, investment, industrial capacity, post-disaster reconstruction and other mutually beneficial areas will also benefit Nepal.

Despite the series of agreements, it would be great if Oli can play the role of a catalyst for bringing the new era to Nepal. If the protocol on transit facility to Nepal, agreement for importing oil from China and the rail link up to Lumbini could materialize, the new era will be closer.