OPINIONS Never too old to learn about China's population problems

Never too old to learn about China's population problems 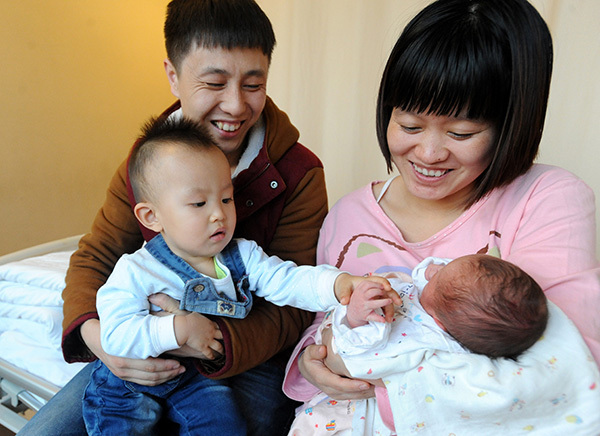 A couple both born after 1990 hold their children, an infant daughter and her 18-month-old elder brother, in Shenyang, Liaoning province. (File photo: China Daily)

"Too many or too old" has long been a debate among Chinese demographers. But the answer to the question, according to official statistics released on Friday, may be both.

For the first time, China officially announced that its population on the mainland crossed 1.4 billion, temporarily wiping out speculations that India might surpass China as the world's most populous country. However, heavy hangs the head that wears the crown of the country with the largest population.

Good news came at the same time that China's economy registered an annual GDP of 99.0865 trillion yuan ($14.4 trillion) in 2019, and GDP per capita reached $10,276. For years Chinese demographers have been addressing the challenge that "China isn't rich yet, but its population is aging". The news that China's economy is moving toward the 100 trillion yuan mark brings a sign of relief.

But that doesn't mean China could rest assured on its daunting population challenges. The Chinese population is not only the largest in size, but also has a very unbalanced structure.

The World Health Organization issued an alert on the dramatically rising pace of aging among populations across the world. France had almost 150 years to adapt to the rise in aging population from 10 percent to 20 percent of the total, whereas China has to adapt to the change in slightly more than 20 years.

It's high time for the most populous country to race against the fast pace of aging, from making up for the shortfall in pension funds to improving its healthcare system and expanding nursing care services.

To curb the trend of fast aging, China has eased its population policy since 2013. And since the new year of 2016, China has implemented a policy to allow all couples to have a second child. But the huge costs to raise a child, including the high housing prices and big expenditures on education, hinder many couples from having a second child.

In 2019, there were 14.65 million newborns, and the population had an increase of 4.67 million year-on-year. The decline in new births means the Chinese population may reach its peak of less than 1.5 billion even before 2030, a demographer named Cui Shuyi predicted.

Days ago, Liang Jianzhang, founder of China's largest online travel agency Ctrip.com and a Peking University professor, sparked huge controversy. He said in a talk show that the Chinese population will continue to decrease and even be extinct in a thousand years, if birth rates remain at the current low level.

Such a hypothesis is eye-catching and impressive, but doesn't hold water. People's willingness to have children fluctuates with times, based on the economy, policy, culture and other factors playing complicated roles. And as China's birth rates have seen rapid changes in the past decades, how can the rates remain at the same level for hundreds of years?

People are never too old to learn about China's aging challenge. As the most populous country, China has to strike a balance. It needs to keep an optimal population size and not put too heavy of a burden on its natural resources, while taking measures to ease household burdens to encourage births and providing more public services to take care of the aged.