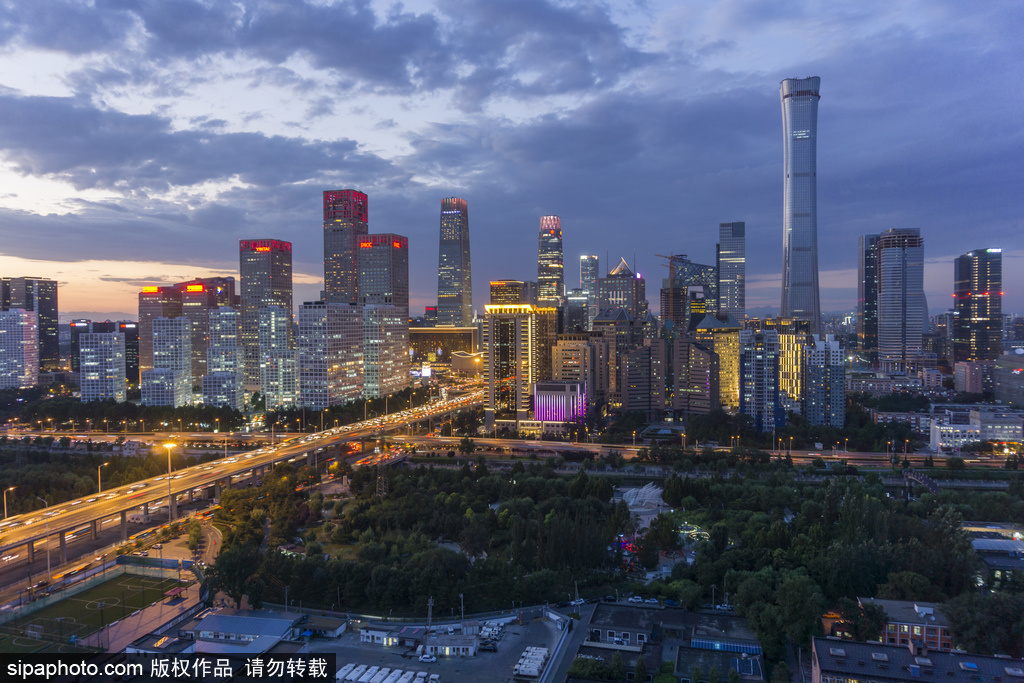 A bird's-eye view of Beijing's central business district, home to many companies on the Fortune Global 500. [Photo/Sipa]

The Xinfadi wholesale market, the source of the latest novel coronavirus infections in Beijing, reopened on Saturday after the city authorities effectively controlled the new outbreak in less than two months. A few days ago, the last of the 335 infected people recovered and was discharged from the hospital. Which shows that, if prompt, strict and effective measures are taken, near normalcy can be restored in a couple of months.

Life in Beijing is gradually, but cautiously, returning to normal with city residents starting to enjoy the highlights of summer such as night time snacks outdoors. Also, swimming pools and cinemas are reopening, and students are preparing for the fall semester from the first week of September.

No death, no citywide lockdown, no price hike, no strain on testing or medical services. Beijing's response has been acclaimed by many as efficient, precise and scientific, while experts say the capital has set an example of how to contain new outbreaks.

Since scientists worldwide agree that the novel coronavirus, unlike the SARS virus, will not disappear abruptly and, instead, could linger for quite a while, it is important to work out a scientific, sustainable and cost-effective response to it which would cause minimum social and economic disruption.

The measures Beijing implemented after the Xinfadi infection cluster was detected were not the result of rocket science. Social distancing, contact tracing, quarantine, and mass screening are not new public health measures to bring a disease under control, but they do need a decisive approach and a supporting public to be effective.

Thanks to the concerted efforts of society, the daily caseload declined to zero in less than a month after the detection of the first new infection on June 11. Yet the new infection cluster showed the capital, or for that matter any other city, cannot be fully safe until the virus is effectively contained across the world. And that's why public support and cooperation are essential to bring new clusters under control.

The first confirmed case in the new infection cluster, a 52-year-old man, faithfully informed the city officials, including medical experts, of every place he had visited since May 30 and provided a list of 38 people with whom he had come in close contact in the two weeks before being diagnosed. Which helped the experts to soon identify the outbreak source to Xinfadi, which the authorities ordered shut two days later so as to cut off the main link in the transmission chain.

On June 16, based on epidemiologists' findings, Beijing raised the epidemic response level by imposing targeted restrictions such as prohibiting high-risk groups from leaving the city and timely sharing the information on the new outbreak nationwide, in order to curb the spread of the virus.

It took only 12 days for Beijing to cut off the transmission chain, particularly to prevent the new infections from spreading beyond the capital after the first new infection, according to scientific estimation, occurred on June 4. In contrast, it took 47 days to do so in Wuhan, where the epidemic first broke out in China.

In Beijing, widespread application of big data and the internet of things made it possible to detect those at the risk of infection. Some even termed the strict measures as "overkill", because people even driving past the closed Xinfadi market received a message on their phones asking them to take a virus test. Starting with those directly connected with Xinfadi, a mass screening program finally covered nearly 12 million Beijing residents, more than half of the local population, in roughly one month.

Notably, based on scientific evidence such as a low positivity rate and no community transmission, Beijing didn't extend strict screening to the rest of the city, displaying a cost-effective response. But as part of a highly coordinated response to the outbreak in the city, experienced health workers were mobilized in a short period of time to help with the screening exercise and clinical treatment at designated hospitals.

I was among those who took the virus test in Beijing. I can, with honesty, say it was not an easy decision to make to walk into a clinic in mid-June to undergo a virus test. But my anxiety eased to a large extent when the nurse at the registration desk called me on the phone to check my identity. As a journalist covering the health sector for many years, I knew she did that to make sure I remained on the "radar" if the test result was positive. However, that "distrust" boosted my trust and, in general, the public's trust in the city's overall response capacity and capability.

Only if the public trusts the government and the medical facilities will the public health measures work. And Beijing is a perfect example of that.