OPINIONS New US government not a cure of American malaise

New US government not a cure of American malaise

On Jan. 20, President-elect Joe Biden was sworn in as the 46th President of the United States amid tight security by the National Guard. Over the past four years, red flags lit up across various fields in the U.S., from epidemic control, economy, to racial issues and diplomacy. The scene of Trump supporters attacking Capitol Hill on Jan. 6 highlighted the continued deep divide in U.S. politics, and more thoroughly revealed the reality of a torn U.S. society. 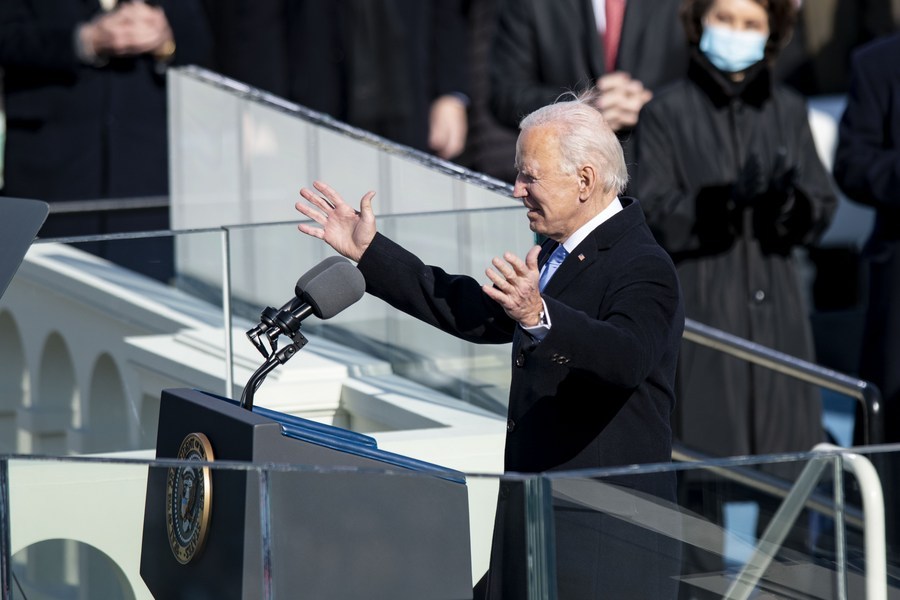 U.S. President Joe Biden delivers his inaugural address after he was sworn in as the 46th president of the United States in Washington, D.C., the United States, on Jan. 20, 2021. (Xinhua/Liu Jie)

The U.S. society has lost its values. With differing self and national identities, it is difficult to form a “spiritual synergy” that unites the whole society to cope with challenges.

The U.S., once a “melting pot” of different immigrant groups and one that recognizes the dominance of white people and Christianity, is now filled with a pluralistic culture that emphasizes immigrants’ own language, religion, and customs.

“Value diversity and harmonious co-existence,” a social characteristic of the U.S., is showing an increasingly sharp confrontation between values due to the split of different races.

The legitimacy of the U.S. Constitution, which is the foundation of the American political system, is being questioned by more racial groups as it was created mainly by slave owners and white people.

Trump, who advocates white supremacy and the dominance of Christianity, has constantly intensified conflicts between white people and other racial groups in areas of immigration and racial policies.

Given these facts, the reconstruction of pluralistic values planned by the new U.S. government will inevitably be blocked by white supremacist groups, making reshaping the American soul difficult to achieve.

In addition, the polarization of the U.S. society and the shrinking of the middle-income group have given rise to anti-elite and anti-system sentiments.

The unequal distribution of wealth under which a very small percent of Americans hold a very large percent of wealth has led to extreme dissatisfaction from ordinary Americans toward political elites and the current systems, filling the U.S. society with hostility, mounting populism and political speculation.

Since the end of the Cold War, differences between the Democratic and Republican parties on major issues involving medical insurance, taxation, immigration and diplomacy have continued to enlarge.

The power rotation has not only failed to advance the process of political reconciliation, but has brought a vicious circle of the two parties’ undermining each other’s work.

Both parties are also experiencing the rise of political extremist factions and the decline of the centrist factions. Such partisan politics does not care about the welfare of the people, but has become a tool to aggravate social conflicts. In a highly divided and toxic political environment, it has become more difficult for the new U.S. administration to implement any big policies.

The Trump administration has exacerbated the political legacy that further divides the U.S. society and makes it more difficult for the new administration to make changes.

Through restricting immigration, and promoting white supremacy, trade protectionism, and herd immunity during the COVID-19 pandemic, the Trump administration has led to intensified racial conflicts, continued class confrontations, damage to U.S. international reputation and disappointment from COVID-19 patients on the federal government.

What’s worse, before leaving office, the Trump administration introduced various unfriendly policies and incited supporters to challenge the results of the election, poisoning the ruling environment of the new government.

The new government, if it fails to break the predecessor’s toxic policy legacy and achieve specific policy results as soon as possible within two years of tenure, will face many severe challenges at home and abroad, as well as difficulties to lead the Democratic Party to win the 2022 midterm elections and the 2024 U.S. presidential election.

The U.S. is at a crossroads, where the power change has provided a chance to correct the destructive policies by the Trump administration. Given the severe and lingering malaise of the U.S. politics and society, it’s very likely that the “political decay” of the U.S. will continue.

Li Haidong is a professor at the Institute of International Relations of the China Foreign Affairs University.