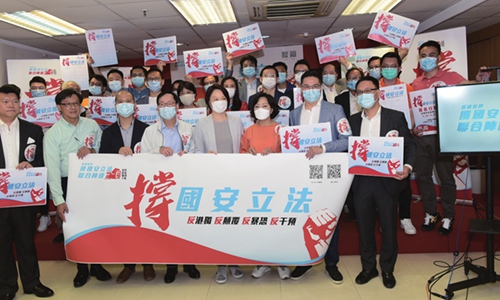 Hong Kong residents from all walks of life collect online signatures and hold a gathering on Sunday morning to show their support for the draft bill to safeguard the national security law to be implemented in the Hong Kong Special Administrative Region. The legal agenda was announced on Thursday night. (Photo: cnsphoto)

Hong Kong will not impose capital controls, the Hong Kong Monetary Authority (HKMA) said on Saturday, as experts predicted that the stability of the Hong Kong dollar exchange rate will be maintained.

Rumors have been circulating that Hong Kong may impose capital controls to deal with capital flight from the city, due to the US government's latest announcement to sanction the city by stripping its special privilege status.

The HKMA noted on its official Facebook page on Saturday that "Free flow of capital and free convertibility of the Hong Kong dollar will continue to be safeguarded by Article 112 of the Basic Law."

It noted that Kong Hong has the capability, resources and determination to safeguard Hong Kong's monetary and financial stability.

"The financial system of Hong Kong is robust and resilient. We are well-positioned to withstand shocks," the HKMA said.

According to the HKMA, the city's foreign reserves exceed $440 billion. The banking system is also highly capitalized with an adequacy ratio of 20 percent. The liquidity coverage ratio stands at 160 percent.

The HKMA reiterated that it sees no need and has no plan to change the well-established Linked Exchange Rate System (LERS), which was implemented in 1983. The system ensures that the Hong Kong dollar exchange rate remains stable within a band of HK$7.75-7.85 per US dollar.

The $440 billion-plus reserve should be able to maintain the LERS as long as there is no rush to buy US dollars, Lin Jiang, a professor of economics at Lingnan University College at Sun Yat-sen University, told the Global Times on Sunday.

"At present, the market is calm. There is no panic in the streets," Lin said. "But things could be changing, depending on the specific terms of the national security legislation."

The LERS will not be significantly challenged, Wang Tao, UBS chief China economist, told reporters in an interview on May 25.

"The Hong Kong Economic Management Bureau has a large amount of funds and a very large US dollar reserve. The amount is much higher than during the Asian financial crisis or the global financial crisis due to quantitative easing in recent years," she said.

Wang said that although there may be capital inflows and outflows and some fluctuations within the short term, the exchange rate of the Hong Kong dollar against the US dollar should not be significantly challenged.