OPINIONS No kidding with children’s pictures on social media

No kidding with children’s pictures on social media 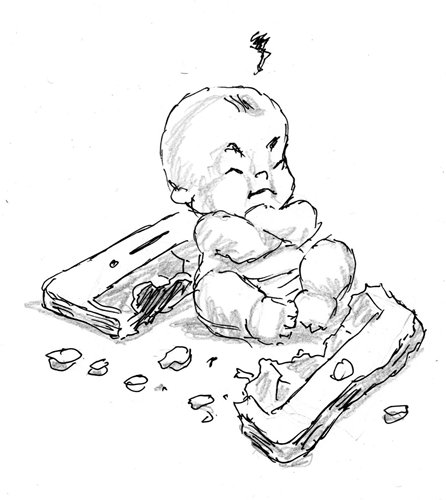 I was added by a long-lost friend on WeChat recently. Once in a while, she would ask after me and my baby boy. One day, her message left me surprised. It said, "Now you are a mom. Why don't you show off your kid on WeChat?"It made me wonder what made her offer the unsolicited suggestion. Nowadays, browsing and posting on WeChat Moments is the most popular activity among China's smartphone users. And new parents are especially addicted to posting photos of their kids and obsess with the number of "likes" they get.But I'm not. After all, showing off one's kid on social media, an activity neatly captured by the term "sharenting," is a form of digital narcissism. In a lovely kid what people otherwise see is a loving mom or dad living in happiness. In other words, deep down parents do not intend to record the life of their children but actually their own, making their children a conduit to feel supported and get reassured. For them, it is a matter of pride.Compared with flaunting one's wealth, home and luxuries, sharenting is more or less acceptable because parental instinct is wired into the brain and always has a high moral ground. Moreover, we are biologically programmed to appreciate young children. A few, especially superstars, did manage to turn themselves and their families into brands through sharenting. But still, others can be irritated by too frequent postings and think it as "dull," "repetitive" and "plain annoying." Some parents may release several photos in just one post, showing their children giggle and play at the same place. To the parents, each photo looks different, while they all look the same to others.The practice of posting kids' photos exists not only in China, but also elsewhere. It however, brings some serious issues into the spotlight.Earlier this year, the Children's Commissioner in the UK warned in a report that pupils aged 10 to 12 are increasingly anxious about their online image and "keeping up appearances." A video featuring a six-year-old girl from the US has recently gone viral. It was first popular on YouTube, and then widely circulated on China's social media. In the video, the little girl vents her frustration about her parents posting her photos on Facebook, which she feels embarrassed about. "It always seems nice and totally normal, but I was taken advantage of. It is completely messed up," she says hopelessly.As such, sharenting is no small deal - it is about respecting children's rights. The very first job of parents is to protect children. What if they fail? In France, parents are warned that their children might sue them later in life for invasion of privacy. It is probably unreasonable to ask parents to stop posting their children's photos altogether, because social media has become a way of life and it does have its own joys and benefits. But the first step could be to ask the permission of children before posting. Parents' love and care should be shown in real life rather than in the virtual world.