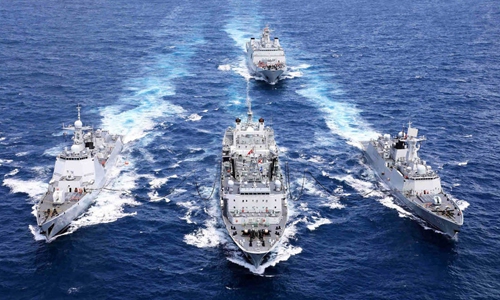 A joint Iran-Russia-China military exercise kicked off in the Gulf of Oman on Friday, to which Western media has been paying close attention. Their commentaries mostly focus on tensions between Iran and the US, Iran and Saudi Arabia, as well as ties among Iran, China and Russia, all identified as competitors by the US as the three powers showcase their unity.

Those analysts have obviously thought too much. Joint military exercises are quite common in the current era. China has had joint military drills with Russia, Iran, Middle Eastern countries including Saudi Arabia as well as the US. China and the US have also jointly participated in multilateral exercises. From whichever perspective, there is no need to make a big fuss about Chinese, Russian and Iranian troops appearing in the same drill.

The exercise is aimed at the security of regional shipping lanes and holding forces that threaten regional security in awe. It should not be interpreted and hyped in a geopolitical sense.

China has no intention to be involved in the disputes in the Middle East, let alone picking a side in the region. Developing friendly ties with all countries is China's diplomatic philosophy. No country should require China to develop a cooperative relationship that is exclusive. China also does not encourage any country to use its China ties as a card to deal with its relations with any third party.

Yet some Western public opinion forces and pro-West public opinion organizations tend to find fault with China in this regard. Such behavior stems from their natural repulsion toward non-Western major powers. Government officials from relevant countries are aware it is not appropriate to show such a mentality publicly and so public opinion institutions play a role in hyping it.

As China grows, it reaches out to the Middle East, where shipping lane safety is linked to China's own energy security. Thus it is an imperative choice for China to present its national strength in the region. However, China doesn't seek hegemony in the Middle East but rather acts as a power that constructively supports peace there.

China won't use proxy warfare in the Middle East or coerce regional countries to pick sides. This is in line with China's diplomatic principles. Translating China's moves in the region from this angle will help reduce misunderstanding about the country.

The countries in the Middle East, including Iran, are friends of China. No regional country would regard China as a manipulator of geopolitics for its interests. This is not the way China thinks and acts.

Some Westerners, especially Americans, are vigilant about the benign relationship between China, Russia and Iran. They should examine themselves for such a mind-set. The joint military exercises will improve the three countries' friendship, and they are rational. Only those with guilty consciences will feel uneasy.