OPINIONS No one fooled by the US' pretense: China Daily editorial

No one fooled by the US' pretense: China Daily editorial 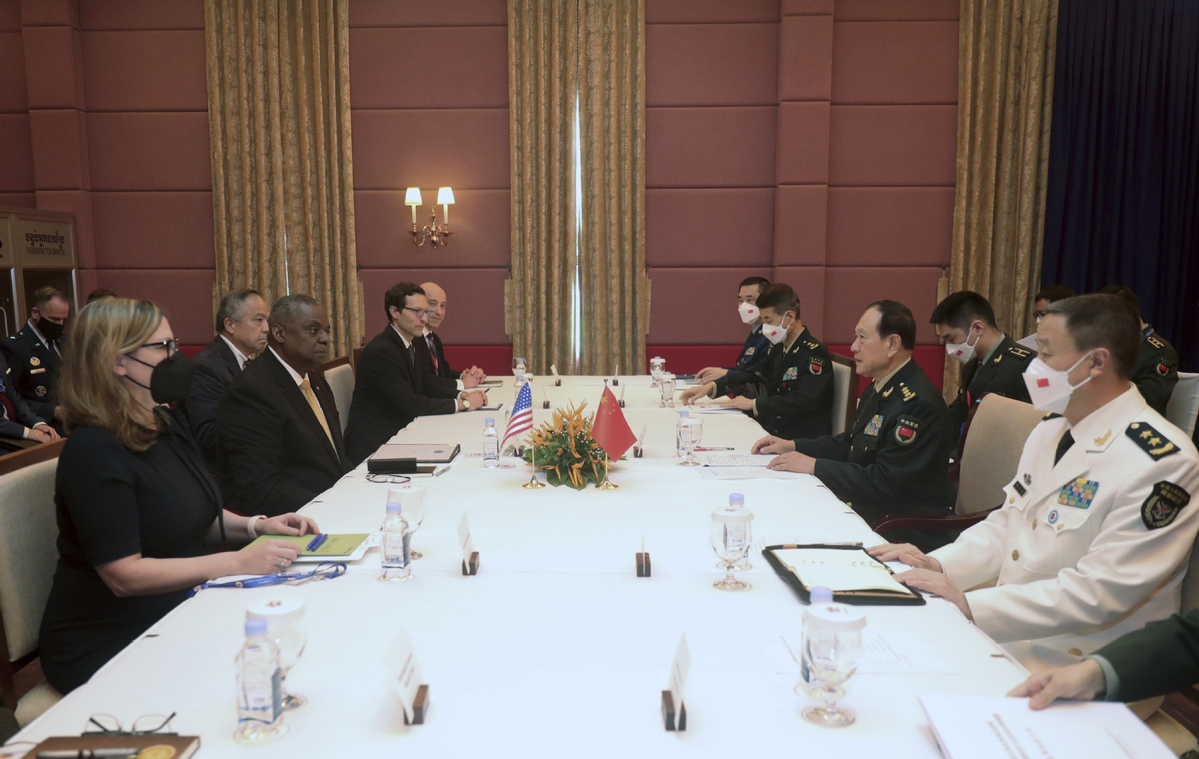 Mapped on charts, the dense zigzag tracks of US warships and military planes that embroider China's coastline from the Yellow Sea all the way down to the South China Sea would likely be unsettling to anyone with trypophobia.

International laws and freedom of navigation are nothing but fig leafs for the United States to disguise the despicable nature of its rogue behavior in one of the busiest waterways of the world, which is otherwise peaceful thanks to the joint efforts of countries in the region.

Thus it was duplicitous for US Secretary of Defense Lloyd Austin to raise concerns about what he called "the increasingly dangerous behavior" of People's Liberation Army aircraft in the "Indo-Pacific" region in his meeting with State Councilor and Defense Minister Wei Fenghe on the sidelines of the Association of Southeast Asian Nations Defense Ministers' Meeting-Plus in Siem Reap, Cambodia, on Tuesday.

Getting to the nub of what threatens to destabilize the region, Austin declared that the US will continue to fly, sail and operate as it has been doing, ignoring the fact that it is the US' reckless and dangerous elephant-in-a-china-shop moves that are increasingly dangerous to others shipping in the waters, its vessels having been involved in a number of accidents.

This is the first senior-level contact between the two militaries since US House Speaker Nancy Pelosi's reckless visit to Taiwan in August dramatically increased the chance of military frictions between the two countries. As a consequence of that provocation, Beijing suspended many communication mechanisms with Washington.

Although the leaders of the two countries acknowledged the necessity of the two sides maintaining communication during their meeting in Bali, Indonesia, last week, and that appeared to create a comparatively positive atmosphere for the meeting between the two defense chiefs, the news briefs issued by both sides indicate it was a chicken-and-duck dialogue as the US side still stuck to its old guns.

While Austin was haranguing Wei on the importance of "substantive dialogue on reducing strategic risk and enhancing operational safety", US Vice-President Kamala Harris was setting foot on a Philippine military base on Palawan Island on the edge of the South China Sea, which the US military intends to use as one of its "lily pads" in the region.

Ridiculously, the US defense chief urged China to calm down on the Taiwan question, stressing that the US' commitment to its "longstanding one-China policy" is guided by the so-called Taiwan Relations Act and Six Assurances, as well as the three US-China joint communiques. But he is well aware that the Act and Assurances fundamentally contradict the three joint communiques that enshrine the US' one-China policy. It is the US that needs to calm down as it has been fomenting cross-Straits tensions by emboldening the secessionist-minded Democratic Progressive Party administration on the island to try and change the status quo.

Amid his attempts to lecture Wei, it is to be hoped that Austin took a moment to heed what Wei had to say. Which was that every US provocation on the Taiwan question will be met with firm and resolute countermeasures from China. That was the core message of the meeting.