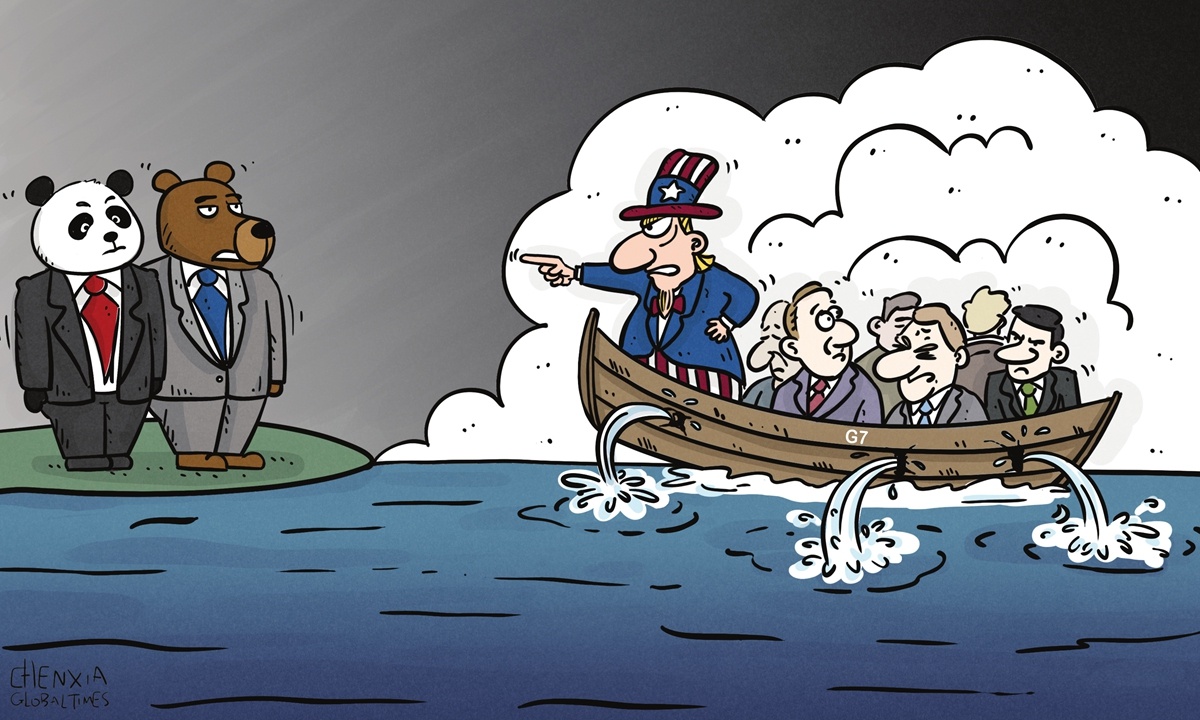 G7 foreign ministers issued a 12,400-word communiqué after three days of meetings in London. Among various topics of no substance, China and Russia were the real focus. Just as many Western media outlets said, the communiqué criticized China and Russia, but it lacked substantial actions against the two countries. This also demonstrates that the US efforts to rally allies against China don't have much energy, but are like an arrow at the end of its flight.

Hegemony is the lifeblood of the US. The US is still the world's most powerful country in terms of comprehensive strength and has super-dominance over the world. The problem with Washington is that it is too greedy. Its demands for hegemony have far gone beyond its capabilities, and the US has fallen into an unprecedented sense of crisis and confusion. As such, the strength of the world's strongest country seems to be not enough to meet its demands, and a large deficit in mobilization capability appears.

The following are what the US is most worried about.

First, the continuous development and expanding strength of China will challenge the US' overwhelming advantages. If China is bogged down or falls into chaos, and this trend proves to be irreversible, then Washington will heave a sigh of relief and get assured. However, the common forecast of the world is that China will continue to develop and it's only a matter of time that China's economic aggregate exceeds that of the US. For some US elites, China's rise is equivalent to a geopolitical event akin to the disintegration of the Soviet Union.

Second, the US alliance system is not as useful as it appears to be, with some important allies only responding to Washington in ideology but reluctant to take real actions to support Washington in encircling China. As the China market grows bigger and bigger, trade between many US allies and China has already surpassed those between them and the US and the tendency will further aggravate. Washington will find it more difficult to mobilize those allies to make self-sacrifice "for the common interests of the West."

Third, the China-Russia strategic partnership of coordination may continue to deepen so that the two countries will become "real allies" in confronting US hegemony. This will lead to more uncertainties in the US-China-Russia game.

US efforts to rally allies have almost hit the ceiling. Their unity is like the last few drops of water in a sponge -- almost nothing is left. It's believed no US ally is willing to confront China and Russia simultaneously as doing that is almost equivalent to strategic suicide. That's why Washington softened some of its rhetoric against China and Russia during the G7 meetings and has had to make some ideological show to demonstrate the West shares "hatred" toward common enemies.

There is still a lot of room for China-Russia cooperation. Our sponge has just been fully soaked with water. China and Russia could make more diplomatic coordination in opposing hegemony and take counteractions against US attempts to strengthen alliances. The two can also tap the huge potential for economic complementarity. In addition, the two countries have just begun in moving closer to each other militarily, if necessary, there could be a lot of cooperation that can cause shocks.

The US greed for hegemony has caught it up in a difficult strategic overdraft. Many empires in history have experienced such quagmires. China and Russia have acquired some kind of initiative as they pursue their reasonable and controllable interests in a pragmatic manner. The US pressure on both China and Russia, as a matter of fact, has failed.

As long as China and Russia don't make mistakes, do their own things well, reinforce comprehensive strategic coordination with each other and continuously deepen integration with the world, the US will have no chance to realize its ambition. Although Washington won the Cold War, in the 21st century, there is no way it can replicate that unexpected victory.