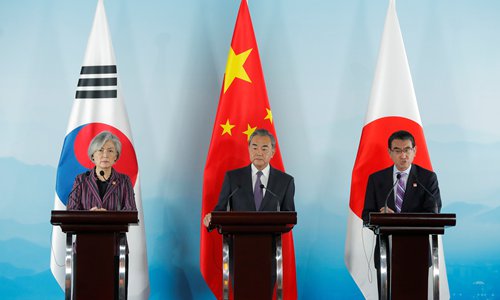 As the three countries are likely to hold a trilateral summit in December in Beijing, the ministerial talks are a regular move to coordinate the schedule for the meeting. Besides, the talks are also an immense opportunity for Japan and South Korea to mitigate tensions.

Wang asked Tokyo and Seoul on Wednesday to seek a solution to their differences "through dialogue," amid strained Japan-South Korea relations. China is a neighbor of Japan and South Korea and the three are important countries in leading global economic liberalization. It is normal for Tokyo and Seoul to have disputes. The two sides have tried bilateral dialogues but they also need more opportunities to sit down and talk calmly. Apart from discussing issues of common interest, under the trilateral framework, China can do as much as possible to mediate.

Both Japan and South Korea are important trade partners of China and the three countries have great potential for mutual cooperation. China doesn't want to see its two geographical neighbors sanction each other due to escalating tensions originating from historical disputes.

Beijing wishes Tokyo and Seoul could bridge gaps and properly solve the contradictions through frank and sincere dialogue and consultation. China certainly won't make carping comments on Japan-South Korea tensions, but it will play a unique and constructive role in bringing the two countries closer through trilateral talks.

Cooperation in fields such as economy, trade and people-to-people exchanges between China, Japan and South Korea are traditional and vital. As of April, the three countries have conducted 15 rounds of negotiations on the China-Japan-South Korea Free Trade Agreement (FTA), which will be of great benefit to them.

The FTA, if achieved, is conducive to establishing an integrated structure of economy and trade in Northeast Asia and the Asia-Pacific region, which would then constitute a big economic region that could lead the world's sustainable economic development. This will benefit not only countries in the region but also the entire international society, therefore many countries are hopeful of continued China-Japan-South Korea cooperation in the future.

However, as allies of the US, Japan and South Korea have close relationships with the US in terms of military geography, which could affect Japan's and South Korea's policies in other fields. Should Tokyo and Seoul try to discard such geopolitical restrictions in order to push forward trilateral trade cooperation between them and Beijing, they will encounter obstruction from Washington.

The 20 years of China-Japan-South Korea cooperation, the growth of trilateral trade investment and development of people-to-people exchanges have actually proven that peaceful development is ongoing. The three countries' people haven't changed their demands in pursuing development, prosperity, welfare, and better livelihoods.

From this viewpoint, Japan and South Korea are expected to have a long-term vision: They need to properly deal with historical issues and strive for the establishment of a Northeast Asian economic circle, as well as a community of shared future for mankind in Northeast Asia and the Asia-Pacific region.

Only Tokyo and Seoul can solve their own disputes. What Beijing can do is provide channels for them to talk. Both Japan and South Korea have currently responded positively to the China-proposed Belt and Road Initiative (BRI). If China can expand the BRI to Northeast Asia, implement the establishment of a Northeast Asian economic circle, and integrate regional issues, it will help create more opportunities for multilateral cooperation, which would also help break down barriers between Japan and South Korea.

Although the FTA will have to face more hindrances, I still believe that the leaders of the three countries will make the correct call out of wisdom.