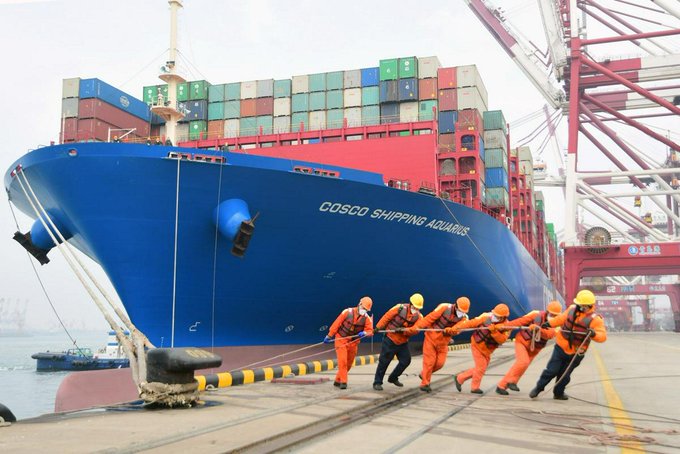 BEIJING, Feb. 14 (Xinhua) -- With most businesses suspended, factories remaining closed and residents urged to stay home to help contain the spread of the novel coronavirus, China's economic growth is hitting the brakes, particularly in the first quarter, but not so much for the global economy at large.

The epidemic will eventually come to an end, just like the winter eventually fades away. Once it clears, Chinese businesses and consumers are going to spend all the money they would have spent in these months but have not been able to. Hence, although Q1 growth will be low, the economy is expected to pick up and even skyrocket after the epidemic. This will boost the global economy as well.

In 2003, SARS resulted in a sharp decline in China's GDP growth in the second quarter, but the negative impact was largely offset by higher growth rates in the following two quarters. The annual growth rate turned out even higher than that of the previous year, according to the National Bureau of Statistics.

At the same time, the government has adopted a raft of unprecedented measures to contain the spread of COVID-19, and as a result, the daily new confirmed cases of the coronavirus disease outside Hubei, the epicenter province in the outbreak, have been dropping for 10 consecutive days. The situation inside the province is also improving as more than half of China's provincial-level regions have paired up with all the cities in Hubei -- with the provincial capital Wuhan excluded -- to support their fight against the virus.

Unlike war or natural disasters where it takes time to rebuild infrastructure and businesses, viruses do not affect the fundamentals. People are returning to work with caution and order after an extended Spring Festival break. Once the epidemic is under control, all the strengths of the Chinese economy will be bouncing back again.

Today, the service sector accounts for more than half of China's GDP. Although some offline business has suffered from the restricted movement of people, the implication is likely to be made up by the surge of online purchases.

The virus will further digitalize China's economy, highlighting the resilience of Internet commerce in offsetting setbacks such as the coronavirus outbreak.

One more thing worth noting is that the markets do not seem too bothered by the epidemic. There have been some big one-day falls but nothing too dramatic, suggesting investors have confidence in China's ability to recover in due time.

"We are confident that China's economy remains resilient," IMF Managing Director Kristalina Georgieva has said in a statement posted on both Twitter and Weibo following the coronavirus outbreak.

Every cloud has a silver lining. Confidence stems from what China has achieved during the past decades. Trust helps rebuild the confidence in China, as the country has received donations and supports from around the globe.

The negative implications of the virus on the Chinese economy will be short-lived. China has been determined to complete the building of a moderately prosperous society in all respects this year. It is also determined to prove that a prosperous China benefits the rest of the world with more opportunities and possibilities.